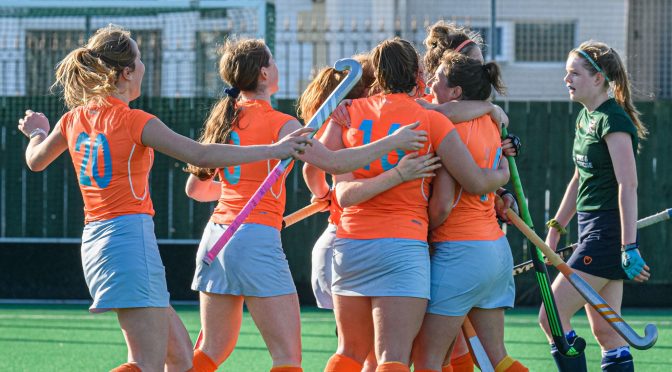 A goal each from Naomi Harkness, Heather Lang and Jenny Eadie gave ‘Dale Western their fourth straight league win, which in turn keeps up their 100% start to the league campaign. The L1s still remain in second spot via goal difference, going into next Saturday’s clash with league leaders Dundee Wanderers 1s. League rivals Uni, on the other hand, lost their second game of the season, leaving them six points off the leading pack.

The contest itself saw the home side start brightly. Early pressure from Clydesdale Western on the student’s defence saw possession claimed high up the pitch which brought the game’s opening goal from Harkness.

The L1s did not let up from the early goal, as they continued to keep a high press on Uni which resulted in their second goal. Youngster Annabelle Ballantyne showcasing excellent composure to slip a through ball for Lang, who made no mistake in doubling the home side’s lead.

A fairly even third quarter passed without any change to the scoreline, but the fourth quarter brought Clydesdale Western’s third – and match clinching – goal. Despite a breakdown in an attacking penalty corner, the L1s retrieved the situation as the ball found its way to Eadie who made no mistake with her shot. The away side did put in their best to force a goal back, and were rewarded for their efforts with a penalty corner conversion to reduce the deficit. The champions did win another corner towards the end but, thankfully for the home side, it was not converted as ‘Dale Western comfortably saw out the remaining minutes of the game.

Clydesdale Men’s 1s fell to back-to-back defeats in the Men’s Premiership after going down to a clinical Grange at Titwood on Saturday.

Three second half goals from the champions gave the Titwood boys a somewhat harsh lesson in finishing, despite putting in a typically energetic and hardworking performance.

The first two quarters came and went in fairly even circumstances. Clydesdale and Grange both had a clear cut chance each – Chris McFadden’s penalty corner drag flick was comfortably saved, whilst a shot from a Grange forward brought a quick save and clearance from ‘Dale goalkeeper Sean Mahoney. But in truth, both sides were lacking on the final pass sticking, partly through strong defensive structures from their respective opponents.

The third quarter was when the game came to life. The home side forced another save off Grange’s ‘keeper not long into the restart. Then arguably Clydesdale’s best chance at 0-0 came and went. Ben Galloway picked up possession deep in to the away side’s half, feeding Euan Lindsay who played on to David Clark. Clark reversed a ball, which took an almighty deflection into the path for Struan Walker – but Walker smacked his head height slap shot wide.

Five minutes after, Grange scored not once but twice in a matter of minutes. A transfer from right to left saw the away side penetrate the D, before a quick fire shot was saved well by Mahoney. The rebound, however, fell to forward Josh McRae who tapped in from a few yards out. Mahoney had no luck again for the second goal, producing a stunning stick save on to the post, but McRae was on hand again to knock in from a couple of yards.

Despite the best efforts in quarter four from the home side, Grange scored a third goal via a penalty corner from Dan Coultas to well and truly seal the win.

It was a day to forget for our two Ladies teams, whilst the only other Men’s team in action on Saturday were back to their best in league competitions.

Both L2s and L3s tasted defeat in their respective Women’s Championship Division One games on Saturday – the latter suffering a first loss of the league campaign. The L3s went one worse than the L2s the previous weekend, going down 4-0 at home to Stirling University 1s.

The L2s are now three without a win in the league, losing 2-0 to Championship One champions Edinburgh University 2s at Peffermill.

The M2s bounced back from a disappointing loss the previous weekend, by comfortably dispatching Grange 3s at Fettes College in Men’s Regional Division One.. Two goals from veteran Colin Moulson set the M2s on their way, but the home side hit back with a counter attack goal. Youngster Owen Gould scored his first goal for the M2s, before doubling his tally shortly before the interval. Jeetinder Berman added a fifth in the second period to seal a 5-1 win.

For a report on Sunday’s cup games, please click here.