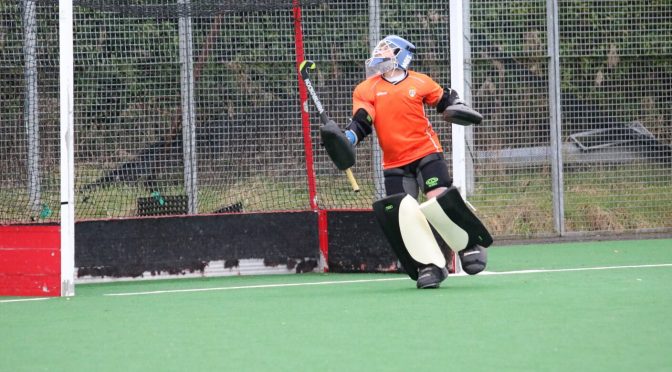 Two penalty shoot-out saves from Clydesdale Men’s 1s goalkeeper Sean Mahoney sent his side through to the next round of the Men’s Scottish Cup at the expense of fellow Men’s Premiership side Uddingston 1s at Bothwell Castle Policies on Sunday.

Both Uddy and ‘Dale were equal after 70 minutes of the First Round tie, as three goals from the home side were matched by the M1s – in particular by defender Andrew Allan, who scored a hattrick. The shoot-out nearly saw the Titwood side on the brink of elimination. Uddingston had one flick remaining at 4-3 ahead, with a conversion meaning they would have won the game. But Mahoney came up trumps to make a crucial save, before saving a sudden death penalty to send Clydesdale into the Second Round of the Scottish Cup.

The game itself proved to be an enthralling encounter for those in attendance. Uddingston opened the scoring from a penalty corner but David Nairn won a penalty flick after winning possession in Uddy’s half and driving into the circle before a physical challenge was made. Nairn, however, missed his flick as he struck the post with his effort. A minute before the break, however, Allan equalised from a penalty corner.

Despite a couple of temporary dismissals, the home side retook the lead from another corner. Clydesdale were back on level terms less than five minutes later, when they were awarded another penalty flick. This time Allan stepped up and made no mistake to level once again. Allan completed his hattrick with another corner conversion to give his side the lead, but the home side took advantage of a temporary ‘Dale card to level at 3-3 with less than ten minutes to go.

The contest went to flicks and after Uddingston took the lead from the shoot-outs first attempt, Allan missed his and Clydesdale’s first. Every flick from both sides after was scored, with the away side seeing Euan Lindsay, Nairn – despite his first half PF miss – and Steven McKnight all convert. The home side then saw their, potentially match winning, fifth flick saved by Mahoney, before captain Gordon Amour levelled. Allan regained his composure to make it 5-4, before Mahoney proved to be the game’s match-winner saving Uddingston’s sixth PF.

Clydesdale Western 1s will enter the Women’s Scottish Plate after suffering defeat to Women’s Scottish Cup holders Edinburgh University 1s at Peffermill – who bounced from their league defeat to the same opposition the previous day.

Unlike Saturday, ‘Dale Western were slow to get started to an Edinburgh Uni side that were keen to right some wrongs from their 3-1 loss in the Women’s Premiership 24 hours before.

The student side’s fast start saw them score a penalty corner early on. And they continued in that fashion up to half time as the L1s remained in the contest. In the second period, a goal-line stop from Uni kept the away side at bay.

As the match continued, the game became more open which saw both teams have chances. But it was Edinburgh Uni who grabbed the game’s second goal late on to seal victory. The loss means Clydesdale Western 1s will enter the Women’s Scottish Plate for the 2019-20 season.

Despite the L1s loss, there will still be one team representing Clydesdale Western in the Women’s Scottish Cup, whilst both Men’s sides booked places into the next round of their respective cup competitions.

The L2s saw off Erskine Stewart’s Melville 1s, as goals from Sarah McHugh, Louise Redpath and Hannah MacDonald gave their side a 3-1 away win. The L3s, however, will enter the Plate after losing 2-1 late on at home to Grange EL 1s – Helen Walker scoring the home side’s goal. The L4s were also knocked out at the First Round, but in the Women’s Scottish District Cup at home to Ardrossan 1s. Catherine Clark scored in vain for the L4s, who will now enter the District Plate.

Both M2s and M3s saw off Dundee Wanderers 2s and 3s in their cup competitions. An inexperienced M2s side got through their First Round tie in the Men’s District Cup via penalty flicks away to Wanderers 2s. Despite falling behind, Ruairidh Callaghan and Ian King gave their side a 2-1 lead at half time. But a defensive slip up let the home side back in midway through the second period. M2s goalkeeper Fergus Barrows made two saves in the shoot-out – sending his side through with a 5-4 penalty flicks win following a 2-2 draw in normal time. The M3s had no such problems against Wanderers 3s at Titwood, thrashing their Dundonian opponents 6-0. A hattrick from the returning David Sturgess set them on their way, whilst Derek Linden, who was also on return, Jamie Green and a first M3s goal for Cameron Deans completed the win.