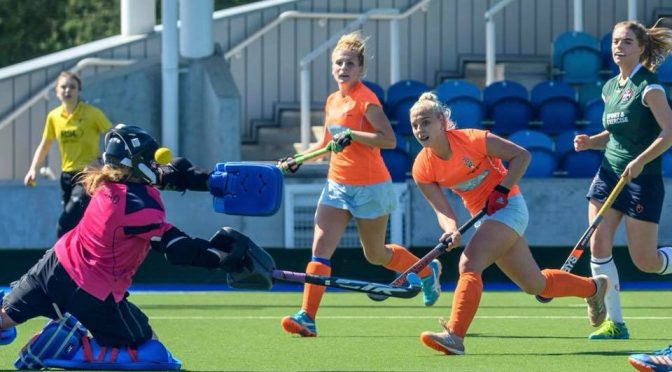 Clydesdale Western 1st XI sadly missed out on Scotland’s top European seed for next season after losing on running penalties to Edinburgh University in the Women’s National Play-Off Final following a hard fought draw in normal time at Glasgow Green on Sunday.

In the first half, it was Edinburgh University who shaded possession and chance creation.  With this impetus, they unsurprisingly took the lead from a penalty corner that was hit low and hard in to the ‘Dale Western goal from Uni’s player-coach, Samantha Judge.

It was more of the same in the second half from Uni but the student side could not find a second goal.  The L1s were indebted to some fantastic goalkeeping from Jessica Buchanan.  Buchanan produced a string of excellent stops in the second period to keep her side in the contest.  And it was not to be in vain when ‘Dale Western forward Lexi Sabatelli picked up the ball just short of the 23m before driving in to the circle and placing a flicked shot past the Uni goalkeeper and level the scores with just over ten minutes to play.  And in those ten minutes, it was Clydesdale Western who created the more obvious chances and nearly found a winning goal through Millie Brown, but her shot at goal went just wide of the goal.

The contest finished level after normal time, and entered running penalties.  Edinburgh Uni scored three out of four attempts, whereas Clydesdale Western only managed one conversion of four attempts – Brown scoring for the girls – as Uni won the Play-Off Final.  Uni will also qualify for Europe next season as Scotland’s highest seed.  Despite the loss, Clydesdale Western’s win against Grove Menzieshill in the Play-Off Semi Final meant the L1s will also play in Europe next season.