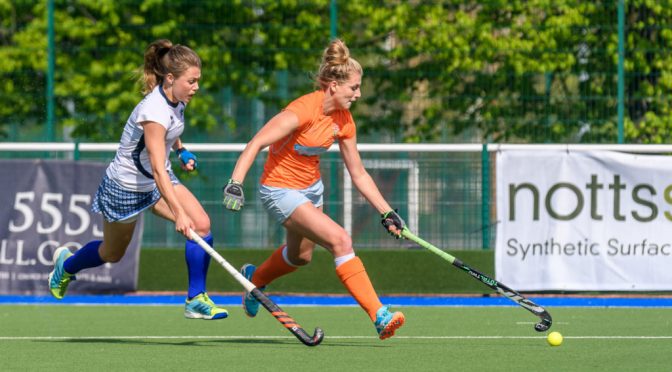 Clydesdale Western sealed a place in Scottish Hockey’s Women’s National Play-Off Final after coming from behind to beat Grove Menzieshill at Glasgow Green on Saturday afternoon.

‘Dale Western fell a goal behind as a swift counter-attack from Grove resulted in a back post tap in past ‘keeper Jessica Buchanan.  But the home side recovered and got their equaliser not long after when Heather Howie deflected in a penalty corner sweep from Frances Lonergan.  The L1s went in at half time a goal ahead when Anna Hoolaghan’s pass into the penalty circle was inadvertently deflected into an unmarked Susie Gillman’s path.  Despite her first shot being saved, the rebound fell back kindly to Gillman who composed herself to put the girls 2-1 up.

With the score at 2-1, the away side were always still in the game, and nearly equalised 10 mins before the end, when a forward was found unmarked in the ‘D’.  However, Buchanan got out quickly to make a key save.  That save proved to be important as Clydesdale Western scored their third goal of the game not long after.  Good work down the right baseline from the L1s saw Jen Eadie take a reverse stick shot at goal.  The shot deflected up and towards the back post where Lexi Sabatelli was waiting before smashing it in overhead.

The home side saw the game out without too much trouble after to give themselves a Play-Off win which sees them qualify for European competition for next season.  This was confirmed after Edinburgh University beat Watsonians in the other Play-Off Semi Final at Peffermill.  Clydesdale Western will play Edinburgh University in the Play-Off Final on Sunday (13th May), 2.00pm PB at Glasgow Green.  The winner off the Final will be confirmed as Play-Off champions and also represent Scotland’s highest seeding in European competition for the 2018-19 season.  The girls need as much of your support as possible, so please do your utmost to attend!