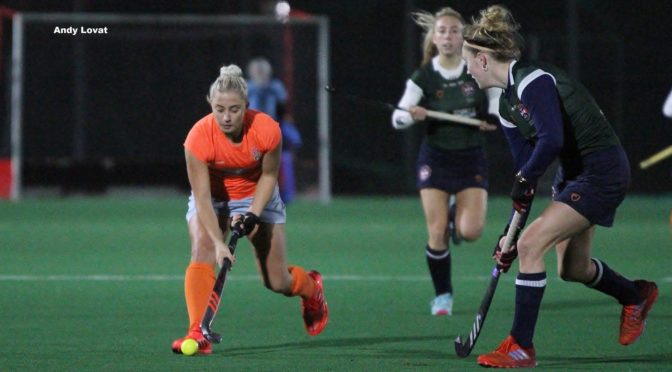 This weekend sees more big clashes for our Clydesdale and Clydesdale Western teams in both league and cup competitions.

Clydesdale Western will play Edinburgh University twice over the weekend, starting with a huge Women’s National Division One meeting from 1.00pm at Peffermill.

‘Dale Western returned to WNL 1 action last week with a 6-0 win over GHK on ‘Friday Night Lights’, whilst Uni bounced back from a rare defeat with a narrow 2-1 win against Watsonians. The L1s currently hold the advantage at the top of the table by goal difference as well as holding a game in hand. The last time the two sides met was back in late November, with Clydesdale Western securing a tense 1-0 win at Titwood.

Selection wise, head coach Derek Forsyth welcomes back Heather Howie and Jen Eadie, whose involvement last Friday was blocked by Scottish Hockey due to their involvement in Scotland Women’s training camp in Italy. Heather Lang is also in for a second selection, this time against her old side. Lang, who had been out with a long term back problem which required surgery, has shown excellent form in the L2s in the past few months, which prompted a call up against GHK – in a match where she registered a goal and assist to her name.

Clydesdale Men’s 1s will hope to keep up their unbeaten start to 2019 and hopes of a top four finish in Men’s National Division One when they face Edinburgh University Men’s 1st XI at Peffermill from 4.00pm.

‘Dale have collected four from a possible six points on return to outdoor league action, with their latest result being a 4-3 win at home to Kelburne. Edinburgh Uni also secured a one goal win, beating Watsonians 3-2 to remain three points behind Clydesdale in sixth. The previous meeting between the two was the same day both women’s 1st teams played – the M1s securing a late 2-1 win at home thanks to a Ewan Fraser double.

Ciaran Crawford is without Aidan Black and veteran Graham Dunlop, who is still sidelined with a shoulder problem, but other than that has a full squad available to select from.

Elsewhere, there are a couple of big games for our Clydesdale and Clydesdale Western teams including a must win for the L2s.

The L2s, in Women’s Championship Division One, know anything less than a win leaves their hopes of catching tomorrow’s opponents and league leaders, Edinburgh University 2s in tatters. The two sides – who are separated by nine points in the table – will meet at Titwood from 4.30pm. The L3s, in the same league, will hope to maintain their fourth position status when they play away to Stirling University 1s, 12.30pm PB. At the same time, the L5s play away to Ferguslie 1s in Women’s West District Division Two, whilst the L4s in Division One will play at home against Glasgow Accies 1s – who pipped them in last Sunday’s Women’s West District Cup Semi Final – from 3.00pm.

For the men’s teams, the M2s will hope to keep up their run of positive performances in Men’s Regional Division One. A 3-2 win against Grove Menzieshill has given them breathing space at the bottom end of the league. Their next fixture sees them host Western Wildcats 2s from noon. The M3s play immediately after at 1.30pm against Uddingston 3s in Men’s West District Division 1A. At the same time, the M5s are on the Hutchesons’ Grammar pitch to take on Anchor 1s in Men’s West District Division Three. The M4s, like last weekend, are away but this time to Giffnock 1s, 3.00pm PB.

Clydesdale Men’s 1s will be aiming to reach the Semi Final stage of the Men’s Scottish Cup, but will have to overcome Grove Menzieshill at Titwood from 2.30pm on Sunday.

The M1s got to the Semi Final stage last season, but agonisingly lost on running penalties to eventual cup winners, Grange. ‘Dale will have to negotiate past Menzieshill, who beat them in their first meeting in Men’s National Division One earlier this season. The two sides did play more recently, however, and took a point each following a 1-1 draw at Dundee International Sports Centre.

Clydesdale Western coincidentally will play Edinburgh University Ladies 1s 24 hours after their league meeting in the Quarter Finals of the Women’s Scottish Cup at Peffermill.

The L1s will be hoping to go as far as they can given their first round exit in 2017-18, although having won the Women’s Scottish Plate at the end of that season. Clydesdale Western have already seen off GHK and the L3s to get to the Quarter Final stage.

Clydesdale Western 2s and 4s will hope to book their place in the Semi Finals of their respective Plate competitions, whilst the L6s are in league action.

The L2s will play GHK 1s – who were knocked out by the L1s in the first round of the Women’s Scottish Cup – from 3.00pm at Old Anniesland. The L2s themselves were knocked out at the same stage as GHK on penalty flicks to Edinburgh University 1s but entered the Plate and saw off Watsonians 2s in the previous round.

The L4s will host long distance travellers in Highland 1s from 1.00pm in the Women’s Scottish District Plate Quarter Final. The L6s are in Women’s West District Division Three action away to GHK 3s from 1.30pm.