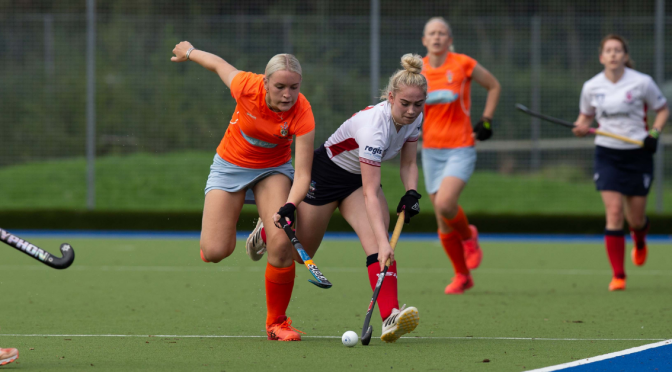 Clydesdale Western 1s host Western Wildcats 1s on Saturday from 2.30pm at Titwood in a bid to reignite their Women’s Premiership title bid.

Despite having a game in hand, those results have left Derek Forsyth’s side in second place, six points behind Watsons. But wins in all five of their remaining league games – starting with Wildcats on Saturday – whilst maintaining their goal difference lead would clinch the top prize come the end of the season.

The head-to-head book is on ‘Dale Western’s side going into Saturday clash with Wildcats having won their previous two encounters in the league this season. The first in September last year being a late 4-3 win before a more comprehensive 3-0 victory in February of this year – both at Auchenhowie.

With regards to team news, Scotland capped forward Emma McGregor is in contention for a return to the L1s squad. Paz Medina San Martin remains the team’s only long-term unavailability, meaning as close to a full strength squad is likely to feature.

Clydesdale 1s good run of recent form will be put to the test when they visit Fettes College to take on Grange 1s in the Men’s Premiership from 12.00 noon.

Those wins have taken Ciaran Crawford’s side within a point of third placed Uni. Grange, meanwhile, will hope to keep up the pace with Western Wildcats 1s, who sit five points clear at the top of the Premiership table with only four games remaining.

Both head-to-head contests between these two sides this season have been close. But the Edinburgh side pipped Clydesdale by a single goal on both occasions. The first meeting took place in November, finishing 6-5 to the Stags. Grange then won 3-2 in the second game back in February.

Forward Euan Lindsay had been a notable absence in recent weeks, but is available for Saturday’s trip to Edinburgh and is in contention for a recall to Crawford’s team.

There are six more games for Clydesdale & Clydesdale Western teams over the weekend, three of which are at Titwood.

The M5s start of the Titwood schedule on Saturday with a 12.30pm start against Western Wildcats 5s in Men’s West District Division Three. The L2s feature after the L1s at 3.30pm when they welcome Watsonians 2s in the A Division of the Women’s Championship. On Sunday, the L6s will hope to do a double over Strathclyde University 2s in Women’s West District Division Three when the two sides meet again from 1.00pm. The L6s won 5-2 against Strathy 2s just last weekend.

Returning to Saturday’s action, the M5s Development have the first passback of the day for ‘Dale & ‘Dale Western – a 12.00 noon start away to Uddingston 5s. The M2s are up against Grange 2s at St George’s School from 1.00pm in the Men’s Regional Division. Half an hour later, the L3s pushback in their B Division of the Women’s Championship fixture away to Waverley Inveresk Trinity 1s.