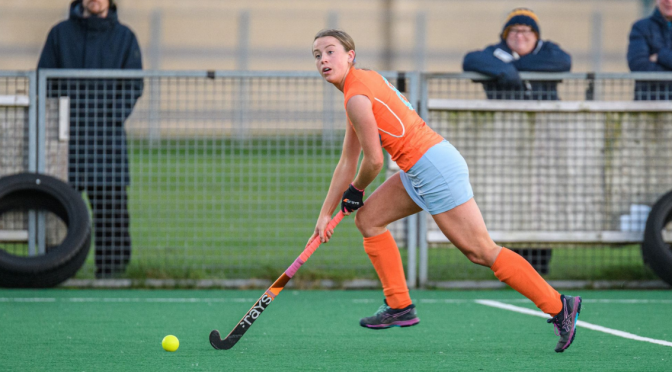 Clydesdale Western 1s will play the final part of back-to-back games against Dundee Wanderers 1s in the Second Round of the Women’s Scottish Cup at Titwood on Saturday from 1.30pm.

The L1s will hope to follow up a resounding 13-1 win over the Taysiders last Sunday in the Women’s Premiership to sign off a perfect first half of the outdoor campaign. ‘Dale Western have won all eleven of their league games as well as their First Round victory over Edinburgh University 2s back at the start of October. The Titwood girls have been in excellent scoring form of late too having scored 58 goals – as well only conceding one – in their last six games.

Head Coach Derek Forsyth is boosted by the returns of Karin Belch and Lexi Sabatelli for Saturday’s home tie having both missed the last three games with separate injuries. Goalkeeper Iona Colquhoun was involved in the opening round victory against Uni 2s and may be in contention for selection.

An early pushback of 11.30am at Peffermill against Edinburgh University 1s is what awaits Clydesdale 1s in the Men’s Scottish Cup Second Round on Saturday.

The M1s will be involved in the Cup for the first time this weekend having been given a bye from the previous round. ‘Dale completed a topsy-turvy league campaign with a 6-1 success over Hillhead last Saturday to lift them into sixth place of the Men’s Premiership. Whether that will be enough to keep them in the top six before the split is confirmed will be determined by two remaining results elsewhere.

Saturday’s scoreline was Clydesdale’s fifth win of the league campaign, one of which was against Edinburgh University in the first weekend of October. Andrew Allan’s hat-trick proving crucial in a 4-3 win which incidentally remains the student side’s only defeat so far this season.

Head Coach Ciaran Crawford will be grateful to the news that trio Fraser Hirst, Euan Lindsay and Sammy Kasto are all available for this weekend’s match having missed the Hillhead contest.

There are a number of games for our Clydesdale & Clydesdale Western teams ranging between cup, league and double headers.

The L3s have perhaps the trickiest of all the match ups when they take on Women’s Premiership side Uddingston 1s in the Second Round of the Women’s Scottish Cup from 4.30pm. The L3s secured the tie having beaten Kelburne 2s at Glasgow Green thanks to a brace from youngster Darcy McNeill. The M4s may challenge the L3s to the day’s biggest challenge as they host Edinburgh University 3s in the Men’s Reserve Cup from 12.00 noon. The M4s were given a bye to the Second Round of the tournament but will be underdogs against a side who play their league hockey in the Men’s Regional Division and held the M2s to a point back at the start of October.

Turning attention to the M2s, Stuart Banford’s side host Grove Menzieshill 2s in the Men’s Scottish District Cup – 3.00pm pushback. A Dean Baber penalty flick and a solo effort from Ian King was enough for the M2s to beat Glasgow University 2s 2-0 at Garscube in the First Round.

Staying with the knockout competitions, the L4s will play at Hutchesons’ Grammar School (HGS) from 1.30pm in the Women’s Scottish District Cup Second Round against Dundee University 2s. In the previous stage, the L4s beat Hillhead 3s 2-1 away from home courtesy of goals from Marnie Moulson and Cath Stirling. The L2s have a double-header weekend starting with an away fixture in the First Round of the Women’s Scottish Plate. Donald Amour’s team are up against Strathclyde University 1s at Millerston at 3.30pm. Then on Sunday, the L2s will look  to close the gap on Edinburgh University 2s to six points in the Women’s Championship when they travel to the capital to play George Heriot’s FP 1s at Mary Erskine School, 1.00pm start.

Returning back to the cup fixtures, the M3s face fellow league opponents Hillhead 3s in the Men’s Scottish Reserve Cup, 3.30pm pushback at Lower Windyedge. The two sides are competing for glory in Men’s West District Division One, and their only meeting so far this season ended in a 1-1 draw.

The ever improving L5s grabbed a hard fought point away to Garnock 1s on Wednesday evening. A goal each from Gemma Lane and Lily McKaig helped their side secure a share of the spoils in Women’s West District Division Two.

The following evening in Women’s West District Division One, the L4s were unfortunately beaten 3-1 at Glasgow Accies 1s. Gill Green’s goal proving to be no more than a consolation.