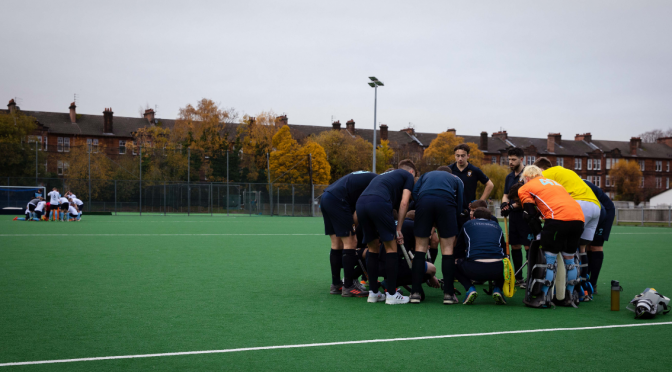 Clydesdale 1s are back in Men’s Premiership action at home for the first time this year when they host Grange 1s from 2.00pm.

The M1s drew an incredible match with Dunfermline Carnegie 1s last Saturday at Woodmill High School. The scoreline finished 5-5 with two goals from captain Andrew Allan and a goal each from Ali Douglas, David Clark and David Nairn. The Titwood boys were perhaps unfortunate to not leave with all three points after a sixth goal was disallowed late on.

The result kept Clydesdale sixth in the league table, but a win on Saturday could see them jump above Carnegie into fifth if results elsewhere also go their way. Grange, meanwhile, are hopeful of catching runaway leaders Western Wildcats 1s, so cannot afford to drop any more points in their demanding pursuit of top spot.

The last time ‘Dale and Grange met was back in mid-November, and it produced a ten-goal affair of their own. But unlike last Saturday, Clydesdale were on the receiving end of a 6-4 scoreline. Allan gave the M1s an early lead, but the Edinburgh side hit back in devastating fashion with five unanswered goals. Allan again and two from the recently departed Ben Cosgrove set up the mother of all comebacks before Grange put daylight once and for all between the two teams with a sixth goal.

Going into Saturday’s contest, Head Coach Ciaran Crawford has no long-term injuries to worry about. Sean Mahoney, Jack McKenzie and Euan Anderson were all notable absentees last weekend, but are all available for the visit of Grange.

Clydesdale Western 1s return to outdoor action with a league and cup double header this weekend starting with Western Wildcats 1s at Auchenhowie in the Women’s Premiership on Saturday from 3.00pm.

On Sunday, ‘Dale Western then take on Dundee Wanderers 1s in a rearranged Second Round tie in the Women’s Scottish Cup at Titwood from 2.00pm.

Ten wins and the Women’s Premiership title will be the L1s – as bizarre a statement that may sound, the Titwood girls are more than capable considering they have already won all eleven of their preceding league matches. Most of them being in convincing fashion. One of their toughest tests came from Wildcats at Auchenhowie in which Head Coach Derek Forsyth’s side had to come from behind to win 4-3 late on September. Fiona Semple proving to be the star of the show with a superb hat-trick.

Since that match up, Clydesdale Western have only conceded one goal since adding to their excellent tally of 70 goals in total from what has been a flawless league campaign so far.

Dundee Wanderers then play the L1s on Sunday in a Second Round Women’s Scottish Cup tie that was postponed in late-November as freezing conditions left the Titwood pitch unplayable. The two sides met the weekend previous to the aforementioned postponement at Titwood in which the Titwood girls ran out 13-1 winners.

Forsyth will have the difficult task of finding a suitable candidate to fill the void left by Jennifer Eadie, who has completed a transfer to Wimbledon following her inclusion in Great Britain Women’s Hockey cycle for Paris 2024. There are no notable long-term injuries for ‘Dale Western going into the weekend’s matches, however.

There are a host of games for Clydesdale & Clydesdale Western teams over the weekend starting as early as 10.30am on Saturday.

That timeslot will involve the M3s, who will hope to keep up in their challenge of the Men’s West District Division One title away to Western Wildcats 3s. On Sunday, Craig Bradley’s side are back in action at Garscube against Glasgow University 3s from 1.30pm.

The L2s, in the top half of Women’s Championship Division A, have a 4.00pm passback at Tipperlinn against Watsonians 2s. The L3s, in the bottom half, are on at Titwood from 5.00pm to play Hillhead 2s.