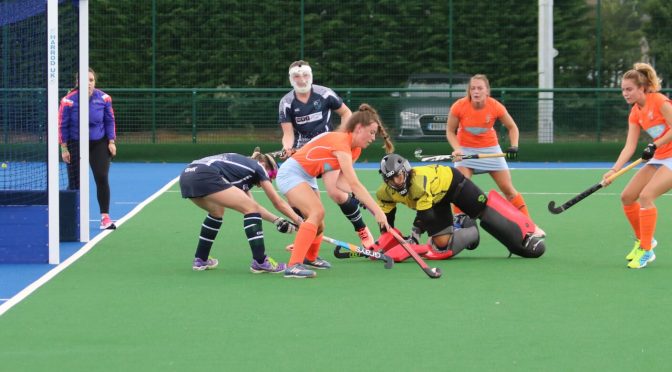 Plenty of games this weekend for Clydesdale and Clydesdale Western – especially a few big games – starting with ‘Friday Night Lights’.

‘Friday Night Lights’ makes a return as Clydesdale Western 1st XI host GHK with the chance to extend their lead at the top of Women’s National Division One.

The L1s will play their first outdoor game of 2019 – having been given dispensation last Saturday due to their EuroHockey Indoor Club Trophy involvement – when they take on a youthful and upcoming GHK side from 8.15pm at Titwood. The home side have the chance to open up a three point gap away from Edinburgh University, who lost 3-2 at home to Western Wildcats last weekend.

Apart from Jessica Buchanan and Ali Howie, head coach Derek Forsyth has a full squad of players to choose from. Howie remains on the sideline with a knee injury, whilst Buchanan has been ruled out from a concussion knock that she suffered in the Women’s Indoor Final a few weeks back.

‘Dale Western and GHK have already played twice this season. The home side won their previous league meeting 3-1 at Old Anniesland before winning 4-2 a week later in a Scottish Cup meeting.

Clydesdale Men’s 1s will be looking to maintain their top four pursuit in Men’s National Division One when they take on champions Kelburne from 4.30pm at Titwood on Saturday.

Despite the M1s picking up a valuable point away to Grove Menzieshill, they fell two points behind fourth placed Hillhead, who beat Kelburne 4-0 last Saturday. The M1s should be in confident mood, having won their previous meeting between the two sides earlier in the season – pipping their Paisley opponents 6-5 in a MNL 1 classic.

Coach Ciaran Crawford has a full squad to choose from, bar Graham Dunlop who remains out with a shoulder problem.

From the rest of Saturday’s games, there is a full card of home games prior to the M1s, starting with the M5s who play Hillhead 6s from noon.

Then the M2s will hope to build on last weekend’s performance, when they host Grove Menzieshill 2s from 1.30pm. The L3s will be looking to bounce back from last weekend’s defeat at 3.00pm, when they play Haddington 1s. The L5s and L6s also play at home, but on the Hutchesons’ Grammar pitch. They have home games against Glasgow Accies (3.30pm PB) and University of Strathclyde 2s respectively.

The M3s and M4s both play away games on Saturday. The M3s will play at noon against Rottenrow 1s at Glasgow Green, whilst the M4s take on Hillhead 4s at Old Anniesland, 3.30pm PB. The L2s are the only Clydesdale Western team playing away on Saturday, when they visit Peffermill to play Edinburgh University 3s for a 2.30pm start.

On Sunday, both the L4s and L5s have their respective Semi Finals of the Women’s West District knock out tournaments.

The L4s are in the Women’s West District Cup and one place away from the Final. However, they will have to negotiate past the tricky task of Glasgow Accies 1s at Upper Windyedge from 1.30pm.

Half an hour before that game, will see the start of the Women’s West District Plate Semi Final for the L5s, who take on Hillhead 3s from 1.00pm at Titwood. Despite an early exit in the Cup back in September, the L5s have put a run together that sees them one place from a Plate Final spot.