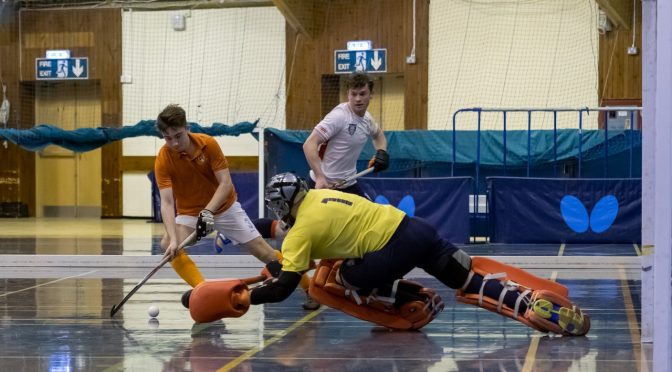 The L1s, in the Women’s competition, are already through to the Semi Finals of the Championship Play-Off having won their opening two Pool B games in the crossovers of the indoor competition. As well as this, ‘Dale Western 1s are guaranteed to finish top of their Pool as they hold a 100% record from their crossover games. Wendy Justice’s side have one more Pool match – against Grove Menzieshill 1s on Sunday, 10.50am pushback – before their Semi Final showdown against the runners-up of the opposite Pool. At the moment, it will either be Watsonians 1s or Edinburgh University 1s, with pushback time being to be confirmed (TBC) on Sunday.

For the M1s – their situation is slightly trickier, relying on a number of scenarios to go their way. At the moment, Neil Mitchell’s side are bottom of Pool A, with four points to their name. They trail Western Wildcats 1s by two points, and Grange 1s by three. Inverleith 1s have already qualified for the Semi Finals and have done so as Pool A winners.

To avoid finishing bottom of their Pool, Clydesdale must beat Grange in a 9.55am pushback and hope for an Inverleith win against Western Wildcats in the game before. To finish second, ‘Dale will need the same set of outcomes, but also to have beaten Grange by at least six clear goals – the last time the two sides played each other was during the classification season, finishing 3-3.

If the M1s finish 2nd, they will face the winners of Pool A, Grove Menzieshill 1s in a Semi Final contest in the Play-Off Championship. A 3rd place finish will mean a contest against the team that finished 3rd in the opposite Pool, and that will be both sides final game of the indoor season for 2019-20 season. At the moment, 3rd place in the opposite Pool is Uddingston 1s. If Clydesdale finish bottom of their group, they will play the opposite Pool’s basement side, which currently is Dunfermline Carnegie 1s. The loser of that match will be relegated to Men’s National Indoor Division Two. The winner will play next week in another relegation decider against the runners-up of Men’s National Division Two, which was Watsonians 1s. All potential fixtures and pushback times are TBC, either on Saturday or for next weekend.

Clydesdale Men’s 2s finish their indoor season with a short trip to Glasgow School of Sport on Saturday. The M2s start at 9.10am against Erskine Stewart’s Melville 1s, before completing their season against Falkirk & Linlithgow 2s with an 11.55am PB. ‘Dale 2s are currently 2nd in Men’s Regional Indoor Division One, and could still clinch a league win and promotion to Men’s National Indoor Division Three, but will need a number of results to go their way beforehand.

There are six Clydesdale & Clydesdale Western league games on Saturday in the West District league competitions – four of them taking place at Titwood.

The final game of the day at home, like last Saturday, will be the M3s. They play Uddingston 3s from 4.30pm in Men’s West District Division One.