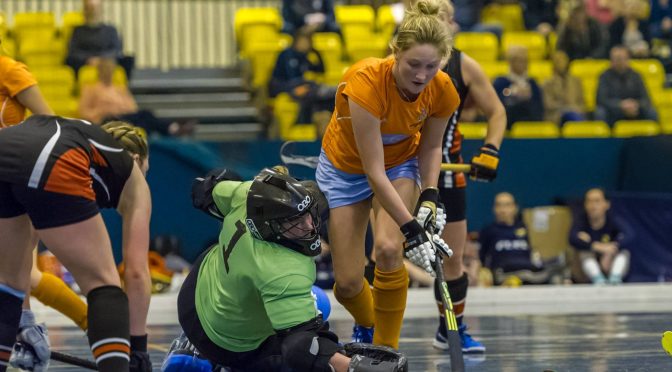 With our Men’s 1st and 2nd teams off indoor duty for another weekend, the spotlight is on our Ladies 1st and 2nd indoor teams. There are also a number of outdoor Women’s West District games.

On Sunday at Bell’s Sports Centre, Clydesdale Western 1st XI will play two of their three crossover matches, holding a 100% record in Pool B of Women’s National Indoor Division One.

Six wins and a loss saw Wendy Justice’s side finish 2nd after the classification round of league matches. The league has now been split into two and ‘Dale Western 1s will be in Pool B, where they face Inverleith 1s, Hillhead 1s and Grove Menzieshill 1s. All three fixtures against the respective sides ended in wins for the L1s, meaning they already have nine points to their name before the start of play on Sunday.

Clydesdale Western open the day’s proceeding against 2nd placed Inverleith 1s from 11.05am. A win coupled with a Grove Menzieshill failure to beat Hillhead in Pool B’s other opening game will guarantee a Semi Final Play-Off spot for the Titwood girls. The L1s second game of the day will be against Hillhead 1s from 3.40pm.

Meanwhile, Clydesdale Western 2s will be aiming to steer clear of relegation trouble in Women’s National Indoor Division Two after their two games at Dundee International Sports Centre on Sunday.

‘Dale Western 2s are currently second from bottom in the table, and their games on Sunday at DISC are two tricky tests. A late start of 1.50pm sees the L2s play CALA Edinburgh 1s, who are currently 2nd in the league table and eyeing promotion to WNIL 1.

The L2s second game is the final game of the day in WNIL 2 against Dundee Wanderers 2s, who are a place below CALA on a virtue of less goals scored in the league campaign so far.

On Saturday, the L6s are on first away to Strathclyde University 2s from 12.30pm. The L6s will be hoping to build on a hardworking performance last weekend that got them a deserved point in Women’s West District Division Three against current league leaders Greenock Morton 1s.

The L4s have two games this weekend. On Saturday from 2.00pm, they are at Upper Windyedge to face Glasgow Accies 1s, before a trip to Garscube on Sunday sees them play Glasgow University 3s, 1.00pm PB. Marg Taylor’s side are currently 2nd in Women’s West District Division One, three points behind league leaders and last season’s champions Rottenrow 1s.

There is a double header for the L5s too, but between Sunday afternoon and Monday evening. Trish Lonergan will take her side to face Kelburne 3s at Glasgow Green from noon on Sunday. Then on Monday evening, Titwood will be host for the L5s against Stewarton Garnock 1s, 7.30pm start. ‘Dale Western 5s are hoping to stop a rot of four straight losses in Women’s West District Division Two, which seen them drop to 9th in the league table.

The M4s are the first Clydesdale Men’s team back for outdoor competition in 2020 as they travel to Linwood to play Anchor 1s from 2.00pm.

The first half of the Men’s West District Division Two season has proven to be quite tough for the M4s. With only a win and a draw to their name from nine games, they sit 11th in the league table.

It has been somewhat unfortunate, with a number of good performances that have yet to turn into results, but a good result on Saturday will hopefully be a turning point for the Men’s 4s.