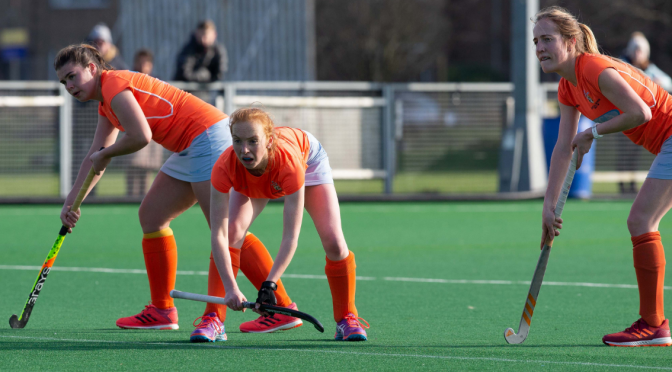 The L1s are tied with Watsons at the top of the table, but the Titwood girls are ahead courtesy of a marginally better goal difference and also hold a game in hand against tomorrow’s opponents.

Nonetheless, Head Coach Derek Forsyth will be hoping for a similar result to that back in September when ‘Dale Western won 1-0 thanks to Jennifer Eadie’s goal.

Since the restart, the L1s have won two league games and one Scottish Cup game, having scored 14 goals and conceded none in the process. One of those league wins came last Saturday when Clydesdale Western put four past Hillhead 1s at Titwood courtesy of goals from Bronwyn Shields, Laura Paul, Fiona Semple and Heather O’Brien.

Early team news is that forward Rosie Tudor could be in line for a 1st team debut following impressive performances in the 2nd XI this season. Georgia Coyle is also likely to keep her place in Forsyth’s squad.

Clydesdale 1s are aiming to register their first win of 2022 when they host Edinburgh University 1s at Titwood from 3.00pm in the Men’s Premiership.

Since the outdoor restart, Ciaran Crawford’s side have drawn two and lost one. But the manner of last Saturday’s draw – having come back from 3-0 down to draw in the final seconds against league leaders Western Wildcats 1s – will hopefully give the M1s the winning kickstart required going into this weekend’s clash with Uni.

The student side have been in good form this season and currently sit third in the Men’s Premiership table with eight wins and four draws to their name. Of the two defeats suffered, one was at home to Clydesdale in early October when M1s captain Andrew Allan scored a hat-trick in a 4-3 win. Edinburgh Uni did get their own back in the Men’s Scottish Cup, however, with a 5-0 win in a Second Round tie in late November.

Having missed the trip to Auchenhowie last week, Sam Hayes and Ethan Robertson are both available for Saturday afternoon’s game and are both likely to return to Crawford’s side.

All Clydesdale & Clydesdale Western teams take to the field this Saturday including the M2s and L2s who are both at home.

The M2s host Dunfermline Carnegie 2s from 1.30pm in the Men’s Regional Division, whilst the L2s have a 4.30pm pushback against Edinburgh University 2s in the Women’s Championship A Division.

Like the M2s, the L3s and L6s are also involved in 1.30pm pushbacks. The L3s travel to Lower Windyedge in the Women’s Championship B Division to take on Hillhead 2s. The L6s are on at Hutchesons’ Grammar School (HGS) to play Dumfries 2s in Women’s West District Division Three.

The first passback of Clydesdale & Clydesdale Western’s schedule on Saturday involves the M4s in Men’s West District Division Two, who take on Uddingston 4s at Titwood from 12.00 noon. 12.30pm is when the M5s take to the playing field away to Ayr 2s in Men’s West District Division Three. And fifteen minutes after, the M5s Development, in the same league, are away to Helensburgh 2s.

The M5s will not be the only team in action against Ayr on Saturday either. The M3s will also make the travel to take on Ayr’s 1st XI from 3.30pm.

Completing the weekend’s card of games are the L6s, in the aforementioned Women’s West District Division Three league, who play Arran 1s away from 11.15am on Sunday.