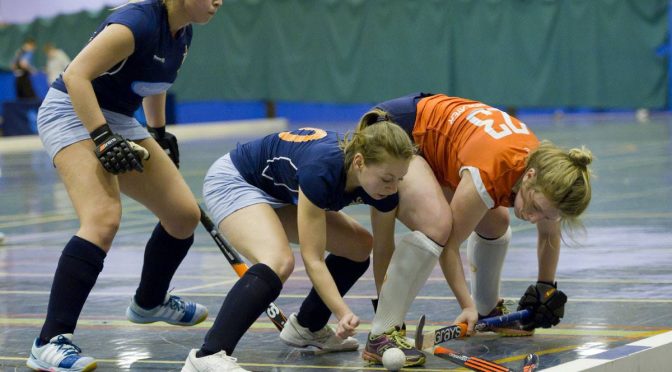 Clydesdale Western 1st XI will complete their first round of classified matches in Women’s National Indoor Division One on Sunday at Dundee International Sports Centre.

At 11.05am, the L1s will take on Watsonians 1s before completing their day of hockey against Edinburgh University 1s (2.45pm PB). ‘Dale Western 1s are currently second in the league table, having won four out of their opening five games.

After the Sunday’s games, WNIL 1 will be split into crossover groups, as points against opposition in a team’s respective group will be carried over.

On Saturday, Clydesdale Men’s 2s have their another triple header in Men’s Regional Indoor Division One at Perth College UHI.

The M2s took two out of three wins in last weekend’s trio of games which took them up to second in the league table, holding nine from a possible fifteen points. ‘Dale 2s begin their schedule from 10.25am against Inverleith 3s. At 1.10pm, the next opposition will be Stirling Wanderers 1s before playing the final game of the day from 4.50pm against Chest Heart & Stroke Scotland 1s.

Clydesdale Western 4s, 5s and 6s all return from the winter break to host games in the Women’s West District leagues this weekend.

Having had an excellent first half to the season, the L4s will be looking to bounce back from what happened in their final game before the outdoor break – a 6-0 defeat to league champions Rottenrow 1s. The loss saw Rottenrow move a point above Marg Taylor’s side in Women’s West District Division One. The L4s will aim to keep pace at the top end of the table when they host Ardrossan 1s from 3.00pm.

The game before sees a youthful L6s team play at Titwood from 1.30pm against Greenock Morton 1s. Scorelines for the Ladies 6s have certainly been a massive improvement from previous seasons. But they have not had much luck in claiming points – three up till now, having lost a handful of games by a goal or two. The task at hand against Greenock Morton may be even trickier as the visitors head into the game top of Women’s West District Division Three, whilst the L6s are ninth.

On Sunday, the L5s are at home to Argyle 1s from 1.00pm in Women’s West District Division Two. Trish Lonergan’s side had an excellent start to the league campaign, having collected eleven from a possible eighteen points to begin with. But towards the break point of outdoor hockey, availability became lower and now the L5s are on a three game losing streak, which has seen them drop to eighth in the league table. A win on Sunday, however, could see ‘Dale Western 5s move up above Sunday’s opponents.