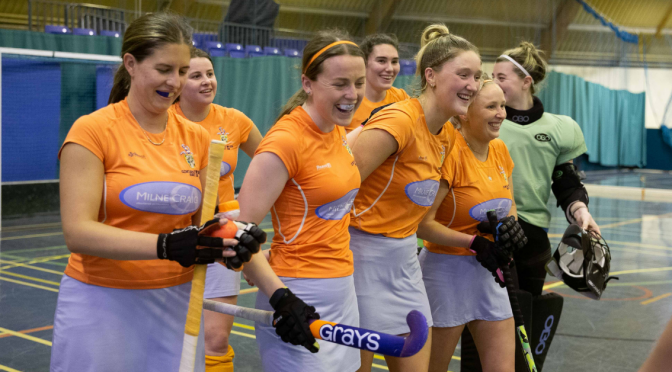 Facing up against SV Arminen and Buckingham, the L1s won 3-2 and 4-2 respectively, giving them a 100% start to the tournament. Wendy Justice’s side will take on Gaziantep Polisgücü SK – who have also won both their opening games – before a match up with SK Slavia Prague on Saturday.

In Game 1 against SV Arminen, ‘Dale Western found themselves a goal down two minutes in before conceding a second after the half time break. Kayleigh Justice halved the deficit with a rebounded goal and the scores were level when Louise Redpath found the back of the goal. And minutes from the end, the comeback was complete when Holly Steiger deflected in a Margery Justice pass from a penalty corner routine.

There was a sense of déjà vu against Buckingham in the second – and final – game of the day for the Titwood girls who fell behind early on again. But unlike their opener, the L1s mustered an equaliser from a Millie Steiger flick at a short corner. Buckingham restored their lead with a driving left to right run and finish. The fourth quarter was when Clydesdale Western reproduced their comeback heroics. An equaliser was found in the form of another corner conversion, this time from Fiona Semple. Despite being a player down due to suspension, the L1s were awarded a penalty flick which was converted efficiently by Margery Justice, who then gave her side extra breathing space with a fourth goal four minutes from time with a powerful flick from the top of the circle.

Head Coach Wendy Justice said after the Buckingham win, “It was two tough games. But two great wins. After a very nervous start, the team have worked incredibly hard for each other and showed great trust and determination. The first game saw some excellent indoor goals with great passing and movement off the ball. The second game showed confidence in our set piece moves with all four goals coming from corners.”

Those two wins undoubtedly capped off a stunning day’s indoor hockey for Clydesdale Western who will no doubt be in buoyant mood going into their next two games on Saturday, starting at 8.00am (GMT) against Gaziantep Polisgücü SK. At 1.00pm, the Titwood girls then face SK Slavia Prague. There seems to be a clean bill of health following Friday’s games. Semple unfortunately took a bad knock colliding with the rebound boards, but it is not thought to be serious to rule her out of Saturday’s action.

Clydesdale 1s are back to league action in the Men’s Premiership for the first time this year when they travel to Woodmill High School to face Dunfermline Carnegie 1s from 1.30pm.

A loss for Uddingston and a single goal win from Inverleith in recent weeks confirmed the M1s position in the top half of the Men’s Premiership at the split point following a completion of one round of league games. ‘Dale sit sixth in the split, but a win on Saturday would take them above Carnegie. However, Head Coach Ciaran Crawford knows his side will be in for a challenging game as their opponents from Fife have performed admirably in their debut season in the top flight. Amongst some of their excellent results this season, it included a 3-2 win against Clydesdale back in late October.

Crawford will hope his team can rectify that result, but will have to do so without Scotland internationalist Ben Cosgrove, who has moved to Australia. The M1s will also be without Steven McKnight. McKnight missed the entire first half of the season due to injury, but has returned to training in recent weeks and will feature for the M2s on Saturday in the hope to be involved with the 1st XI next weekend.

The L5s are also away in Women’s West District Division Two to Ferguslie 1s from 2.00pm. Returning back to the Women’s Championship, the L2s finished in the top half and will host Erskine Stewart’s Melville 2s from 2.30pm at Titwood.

The M2s complete Saturday’s card of fixtures with a contest against Kelburne 2s at Glasgow National Hockey Centre from 4.20pm in the Men’s Regional Division.