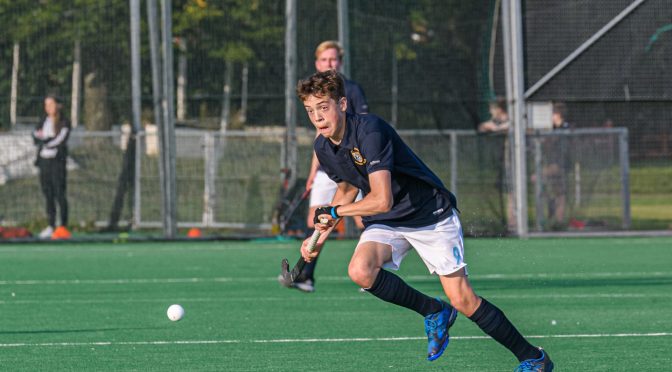 Clydesdale Western 1s made it three league wins in a row on Saturday after their comfortable win against GHK 1s at Titwood kept them top of the Women’s Premiership.

A brace from Jen Eadie and a goal each from Lexi Sabatelli and Heather Lang gave ‘Dale Western a 4-0 result, keeping them three points clear at the summit of the league table.

Going into the game, Head Coach Derek Forsyth was without Ali Howie and Bronwyn Shields, but was able to recall Holly Steiger following an excellent showing in the 2s the week before.  Forsyth, similarly to the previous weekend, handed out another 1st XI debut to Sarah Lonergan.  Lonergan’s 1st XI debut also meant that she was the fifth representative of her family to appear for a 1st XI side of Clydesdale & Clydesdale Western – following in the footsteps of sisters Julie and Frances in the Ladies section as well as brothers Patrick and John Joe in the Men’s section.

The contest started rather slowly, as both sides had to acclimatise to the low temperatures.  Predictably, the home side had the better of possession and had a few penalty corner opportunities, although none were taken.  The deadlock would eventually be broken by the Titwood girls through Lang.  Play down the left hand side saw Millie Steiger play a pass in to the circle, which prompted a minor scrap for possession before Lang eventually took initiative to slot home.

A quickly taken free hit led to Sabatelli collecting in the D and send a shot in to the corner to double the L1s lead.  The second half continued to Clydesdale Western’s liking, having as much of the possession and corner opportunities as they did in the first half.  Two corner chances were taken in the third quarter by Eadie to double their advantage from half time.  The fourth quarter was played out with minimal fuss, meaning Forsyth’s side stay top of the Women’s Premiership with one game remaining before the indoor break.

A double from Struan Walker sent Clydesdale Men’s 1s on their road to an impressive victory against Watsonians 1s at Titwood on Saturday – which has now lifted them into the top four Play-Off spots in the Men’s Premiership.

Walker’s brace followed by a smart finish from Ali Douglas and drag flick from Chris McFadden gave Clydesdale three points in their bid to achieve a Play-Off spot finish come the end of the Men’s Premiership season.  The win also meant Ciaran Crawford’s side – like the Ladies 1st XI – have notched up three straight league wins with one game remaining before the indoor break.

A smart pass just past the halfway line from captain Gordon Amour found Walker, who took a touch into the circle before giving his side the lead.  The young forward then made it 2-0, sending a reverse stick shot high past the Watsonians goalkeeper.  The home side were well on top and tripled their advantage when Douglas picked up possession in the circle, before turning and crashing in a shot to give Crawford’s men a third goal.

McFadden then got his name on the scoresheet for the home side, adding a trademark drag flick from a penalty corner.  It capped off a dominant performance from the Titwood boys, even despite the away side nicking an impressive consolation goal towards the end, as a forward got on the end of a hit pass with the deftest of touches going past goalkeeper Sean Mahoney.

The 4-1 win, coupled with the postponement of Edinburgh University’s home match to Hillhead, meant Clydesdale moved up to fourth in the league.  Their final game before the indoor break will be away to Uddingston.

Frosty weather over the weekend meant that seven out of eleven of the remaining games for Clydesdale & Clydesdale Western teams took place – including a first win for the L6s in over 14 months.

A goal each from Layli Phillips and skipper Rachel Brewer gave the L6s an overdue 2-1 win in Women’s West District Division Three away to Troon 2s.  The result and performance was particularly impressive as Anne Sturgess put in an excellent stint as a makeshift goalkeeper.

The L3s also recorded the same scoreline in Women’s Championship Division One at home to Waverley Inveresk Trinity 1s.  Gill Green and Ali Cox got a goal each to keep their side second in the league, seven points behind current leaders and champions Edinburgh University 2s.

The L4s lost their 100% record in Women’s West District Division One, but still remain top of the league after a 1-1 draw at home Dumfries 1s – Anna Winter got the goal for the L4s.  The M2s also recorded a 1-1 draw away to Hillhead 2s in Men’s Regional Division One.  The M2s, who have been depleted with unavailablities, injuries and suspensions, went behind early but regrouped impressively with terrific performances coming from Adam Docherty and Blair Paul.  The latter of two got the M2s equaliser from a penalty corner in the second half to keep them fourth in Regional One.

The M4s also put an impressive performance of their own as they came from 3-1 down to pick up their first win of the season in Men’s West District Division Two at home to Hillhead 5s.  Oran Pathi, Martin Slater and Foster Harrowell got a goal each, before Pathi doubled his tally with the M4s winner.

The M3s and M5s had tough noon pushabcks in Men’s West District Division One and Three South respectively.  The M3s went down 2-0 to Rottenrow at Glasgow Green, whilst the M5s lost 10-0 to Giffnock 2s at Eastwood High School.

Icey weather called off four games all involving Clydesdale Western teams over the weekend.  The L2s and L5s were called off on Saturday, before the L5s again and the L4s saw their Women’s West District knockout games postponed.  These four fixtures will be rescheduled for a date later in the season.