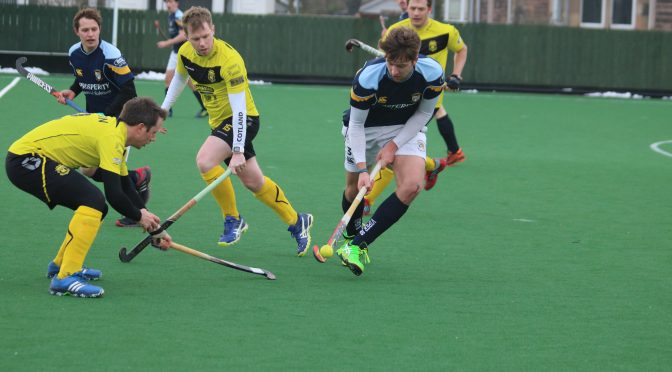 Clydesdale Men’s 1st XI boosted their hopes of avoiding a relegation scenario after surviving a stirring fightback from Men’s National Division One bottom side Inverleith at Titwood on Saturday.

A brace from Struan Walker and a goal from captain Patrick Lonergan put ‘Dale in complete command as the home side looked to be coasting to their second league win in a row.  However, Inverleith pulled a goal back before half time, before adding a second midway through the second half to set up a potentially barnstorming finish.  Clydesdale managed to hang despite the best efforts from the Edinburgh side to seal their fifth win of the league season.  The M1s are now up to 5th in Men’s National Division One, three points clear of 7th place, following favourable results and postponements around them.

Clydesdale Western 1st XI’s hopes of becoming champions of Women’s National Division One suffered a massive blow after defeat to Watsonians at Peffermill.

Despite having a host of chances, ‘Dale Western could not break down a resolute Watsonians side.  The home side got an even bigger reward for their defensive hard work, when they scored the games only goal on the hour mark.  The result means the L1s are now five points behind league leaders Edinburgh University 1s in the Women’s National Division One table.

In the rest of Saturday’s games, the M2s also suffered a massive blow to their hopes of winning the Men’s Regional Division One league prize after they lost 4-2 to Kelburne 2s at Glasgow Green.  Jeetinder Berman equalised early in the first half, but three early second half goals from Kelburne effectively settled the tie, with the M2s second goal from Alex Ingram’s afterwards being a mere consolation.  The M3s, however, picked up an impressive away win at Dumfries thanks to goals from veterans Ali Bleach and Martin Slater.  In the Ladies games, the L2s game against Stirling University was abandoned at half time due to an icy pitch, whilst the L3s were the beneficiaries of a Grove Menzieshill 2s concession.  The L4s secured a late point against Glasgow Accies at Titwood thanks to Karen McQuarrie’s equaliser.  The L5s confirmed their promotion to Women’s West District Division Three after beating GHK 3s 4-1 courtesy of two goals each from Katrina Meikle and Olivia Capaldi.  The L6s also boosted their hopes of stating in Division Three with a vital 3-2 win over Ferguslie 1s – Kate Rennie (two goals) and Rachel Brewer were the scorers.

Clydesdale Men’s 1st XI sealed a place in the Scottish Cup Semi-Finals after knocking two time holders Kelburne out on penalty flicks after an intense goalless draw at Titwood.

Despite no score, both goalkeepers were called in to action throughout the game with Kelburne ‘keeper Rory Kerr saving well from ‘Dale skipper Patrick Lonergan.  Equally, Gordon Clark made some key saves, most notably at penalty corners from Josh Cairns and forwards Jack McKenzie and Johnny Christie.  Defender Andrew Allan also made a key goal-line stop from a second half Cairns’ penalty corner.

The contest went to penalties and after thirteen well taken flicks, Kelburne defender Adam Bain sent his second flick wide of the goal to send the M1s in to their second Scottish Cup Semi-Final in three seasons.

Despite a large amount of possession and keeping the Wildcats 1s scoring chances at a minimum, an experienced L3s side themselves could not create a clear cut chance in the first half.  Wildcats eventually opened the scoring after a defensive mix up from the L3s left a Wildcats forward with the simplest of tap ins.  The L3s stepped up the pressure in the second half, and despite forcing a couple of chances, another defensive mistake saw Wildcats punish the home side to score their second goal and seal their place in the Women’s Scottish Cup Semi-Finals.

The L6s hopes of avoiding relegation from Women’s West District Division Three remain after losing 4-0 to Uddingston at Titwood.  The L6s remain a point above a relegation place.

Well done to all of our teams over the weekend for some incredible results!