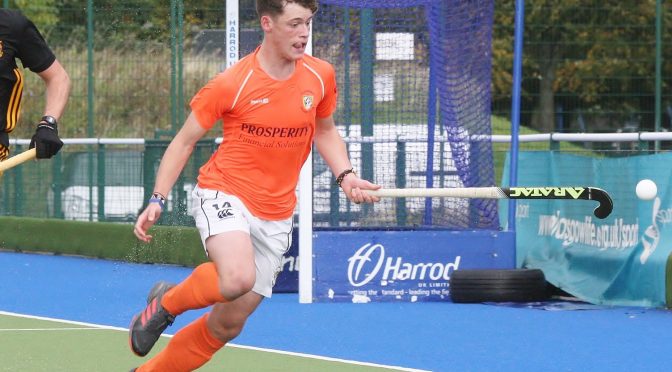 Clydesdale Men’s 1s moved to top of Men’s National Division One after surviving a stirring second half fightback against a gutsy Uddingston side thanks to a stunning virtuoso display from youngster Struan Walker.

In a cagey opening ten minutes at Uddingston, the game sprung to life when the home side were awarded a penalty flick when ‘Dale keeper Sean Mahoney upended an Uddy forward in a one-on-one.  Matters were made worse when Mahoney received a ten minute yellow card for his challenge.  Uddingston took the lead after much delay when forward Brad Hughes sent the flick past the left hand side of temporary kicking back Andrew Allan.

From then on, however, Clydesdale hit back in devastating fashion led by Walker who equalised for the away side despite not having a goalkeeper.  Sam Hayes won the ball on the halfway line before releasing David Nairn down the right hand side.  Nairn’s cross field ball was met by Walker who’s shot crept over the line despite Uddy ‘keeper Craig Wallace getting a good hand to it.  Mahoney returned to the sticks, but the away side kept up their momentum to take the lead.  Veteran Graham Dunlop scooped down the right to play in Walker who cut inside the defender.  Walker then had the composure to reverse a pass to an unmarked David Clark on the back post for a simple tap in.  Clark was then involved in the third minutes late, when his run down the left hand side saw him drop a pass back to defender Antony Small who in turn slapped a pass into the circle for Walker to deflect in and double ‘Dale’s lead.  Walker then completed his hat-trick when he sent a drag flick in to the top corner to make it 4-1 at half time.

In the way the first half went, you would have been forgiven for thinking that Clydesdale would run away with the game.  Two minutes into the second half, however, saw Uddingston get a goal back when forward Chris Boyle was in behind the ‘Dale defence to pick up a bouncing ball before rounding Mahoney.  Despite being at a tight angle, Boyle hit an excellent reverse stick shot in the goal and bring their deficit back to two goals.  Ten minutes of Uddy pressure brought a deserved third goal for the home side when a free hit was passed to Hughes at the top of the circle.  Hughes made space on his reverse side before sending a powerful drive past Mahoney.  With possession going this way and that, the home side were indebted to Wallace for some crucial saves to keep them in the game.  However, he had no answer to an eventual fifth and seemingly game killing goal, when Andy McAllan’s driving run won another corner that saw Walker flick high into the corner for his 11th goal of the season.  Credit to the home side, however, who with two minutes to go saw Hughes complete his treble.  A slapped ball into the ‘D’ popped up off a stick before Hughes expertly brought it down to send a crashing shot to make it 4-5.  Mahoney then redeemed himself for his opening to the match by making a huge save from an Uddy forward in the dying seconds to seal ‘Dale’s win.

The win, coupled with other results, sees Clydesdale go top of Men’s National Division One.

Clydesdale Western 1s match with Glasgow University 1s was postponed due to a waterlogged pitch at the Glasgow National Hockey Centre.

The match will be rearranged for a date later in the season.

There were ironically similar results for both men’s and women’s 2s and 3s, whilst the M4s suffered a 4-1 defeat at home to Giffnock 1s, despite a goal from Alexander Ferguson.  The M2s have still to record a point in Men’s Regional Division One after losing their double header this weekend.  On Saturday, the M2s went 3-2 down to Western Wildcats 2s despite goals from David Sturgess and David Henderson.  Their away trip to Peffermill to play Edinburgh Uni’s Men’s 2s didn’t fare much better when they lost 5-2 – goals came from a penalty flick from Scott Lindsay and a drag flick from Colin Moulson.  The L2s lost away to Uni’s Ladies 2s 24 hours before the M2s.  Both sides carried strong outfits for the game, but it was home side who showed it a bit more with a 4-0 win.  The M3s and L3s both picked up 2-1 wins.  The M3s were away to Uddingston 3s when Ali Bleach and Eddie McLean netted for Craig Bradley’s team, whilst Gill Green and Ruth Bowie scored the L3s in their home win against Stirling University 1s.

Well done to our teams this weekend, especially to the M1s for going top of NL1, and to the M3s who picked up their first points of the season!