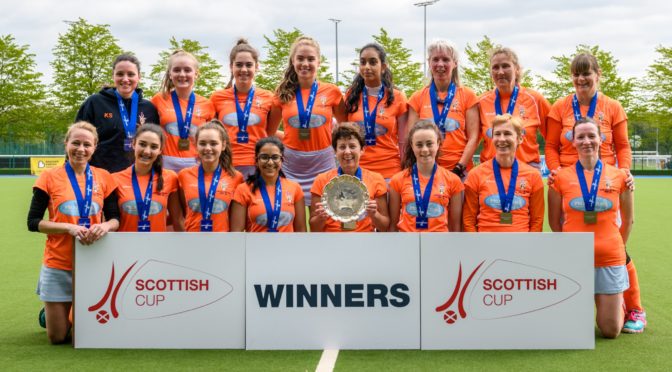 A goal in each half from Cath Stirling gave ‘Dale Western 4s a 2-0 win over their Women’s West District Division One counterparts to claim the Women’s Scottish District Plate.

A fairly comprehensive performance in the first ten minutes from the L4s was played before the deadlock was broken from a penalty corner. Wendy Justice’s strike from the top of the circle was deflected away initially by an Accies defender. The ball fell for Marnie Moulson, who saw her reversed shot saved on the line before the rebound was tucked in by Stirling.

In the second half, both sides had chances to score the second goal of the game. Glasgow Accies best chances fell from corner opportunities, which were dealt with well by L4s ‘keeper Kirstin Stobo. Fifteen minutes into the second half was when Clydesdale Western 4s found their second goal – which effectively sealed the Final. Ellen Murray released Moulson down the right, who skipped past the challenge of a defender before dropping a pass back on the spot for Stirling to sweep low into the corner. Despite Accies best efforts to force their way back into the game, the L4s kept possession well as they saw out the Final without any major alarms.

It capped off an impressive performance for Clydesdale Western 4s. The experienced players showing an excellent work ethic, coupled with the younger players who grew in confidence up until the final whistle.

The club would like to congratulate Clydesdale Western 4s – who were managed by Marg Taylor – on their Plate victory on Sunday morning. Many thanks to all who came to Glasgow Green to cheer on the L4s too!