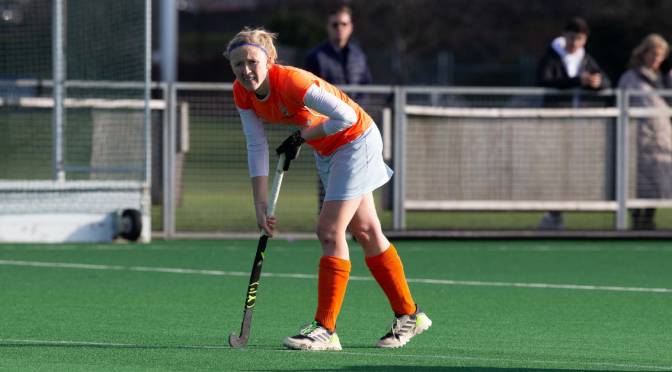 A hat-trick from Fiona Semple helped Clydesdale Western 1s back to winning ways in the Women’s Premiership against GHK 1s in an early afternoon passback at Titwood.

Along with Semple’s treble, there was a goal each in the second half from Heather O’Brien and Bronwyn Shields to give Derek Forsyth’s side a morale boosting win to keep up their challenge for the Women’s Premiership crown. The L1s remain second in the table – albeit with a game in hand – behind Watsonians 1s who remain top by three points following a 4-2 win over Edinburgh University 1s.

Going into the game on Saturday, Forsyth was without Karin Belch, Emma McGregor and Paz Medina San Martin. Keeping their place in the L1s squad were Rosie Tudor and Georgia Coyle, whilst goalkeeper Cara McAllister was recalled after being rested during Wednesday night’s Scottish Cup Quarter Final win over Hillhead 1s.

The way Saturday’s game started against their west end opponents, Clydesdale Western’s did admittedly look a little too eager in a keen attempt to rectify their late loss to Watsonians last Saturday. Chances came and went from, most notably from Holly Steiger and Anna Hoolaghan, whilst penetrating passes went by an unattended back post on a couple of occasions. But the home side eventually broke the deadlock. A penalty corner was adjudged to have been illegally blocked on the goalline, which gave Semple the chance to convert her first goal from the penalty spot – which she duly obliged with a tidy finish.

In the second half, Forsyth’s girls stepped up their press and took the game away from GHK with three goals in the third period. O’Brien collected a pass inside the circle to first time bat a shot into the corner of the goal before Semple made it three with a similarly composed finish. Semple then notched up her third goal finishing off a sweeping move involving O’Brien and youngster Emma Murray. The latter’s lifted pass over the away side’s goalkeeper was nudged in by Semple having reacted quickest to the ball to make it 4-0.

The Titwood girls fifth goal in the final quarter was bundled in by Shields from a short corner after Laura Paul’s initial goal bound strike was blocked. GHK did grab a consolation towards the end when a forward broke clear of the L1s defence to skilfully lift a shot at an angle over a grounded McAllister.

Clydesdale 1s are up to fourth in the Men’s Premiership following an impressive win away against Watsonians 1s.

Forward Jack McKenzie scored two goals and Gregor Hirst grabbed one in a 3-0 win at Meadowmill Sports Centre that takes Ciaran Crawford’s side above their Myreside opponents in the league table.

Captain Andrew Allan was a late call off after his wife – and Clydesdale Western player – Susie welcomed their newborn child on Friday afternoon. But Alex Lihou was a notable return to an M1s squad that began Saturday’s contest well, creating chances early on which resulted in McKenzie scoring an impressive opener. The home side did have a couple of penalty corner opportunities in reply, but were unsuccessful in breaching ‘Dale’s defence.

The Titwood boys were unlucky not to have made it 2-0 in the second quarter, when Jamie Green’s impressive skills and shot were denied by the crossbar. But a second goal finally came after half time when Hirst was on hand to tuck away a loose ball inside Watsons circle.

The game was eventually settled in the fourth quarter when McKenzie was found with time and space in the D to crash home a third Clydesdale goal, giving Crawford’s men back-to-back wins in the league for the first time this year.

Of the ten other Clydesdale & Clydesdale Western fixtures that took place over the weekend, the most impressive result was arguably the L3s who notched up their first league win of the season.

In the A Division of the Women’s Championship, the L2s conceded two goals in the second half to lose to Edinburgh University 3s at Peffermill.

The M3s were the weekend’s biggest winners in terms of scoreline thanks to a 7-0 win at Titwood against Strathclyde University 2s. Colin Moulson’s first half penalty corner was emphatically added to in the second half by Mitchell Pritchard and Ronnie Barr, who each scored two in the second half, whilst there was a goal each for the team’s old guard Spencer Cox and Colin Gambles.

The M4s and L6s both sadly lost their double headers over the weekend. Involved in Men’s West District Division Two, the M4s narrowly lost 2-0 to Rottenrow 2s at Glasgow Green on Saturday before being comfortably beaten 6-2 away to promotion chasing Dumfries 1s – Flynn, again, was on target as too was James Barr. The L6s had a tougher set of games in Women’s West District Division Three, losing out 5-0 on Saturday to Troon 2s and 9-0 on Sunday against Glasgow University 5s.