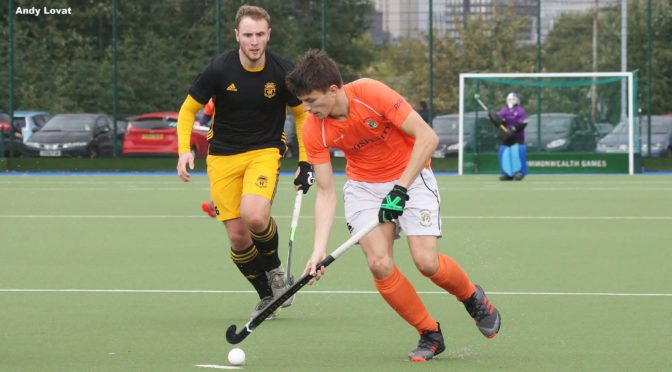 ‘Player Profiles’ is back again, and our next feature is about Men’s 1st XI player, Sam Hayes.  Sam has had a relatively short spell at Clydesdale, but has since found himself a mainstay of the 1s squad, and he owes it all to a kind gesture as Ally Walker reports:

A plate of pasta from a welcoming and friendly opposition turned out to be one of the reasons that 1st team player and 25 year old Sam Hayes, ended up joining Clydesdale in the summer of 2016.  The background to this story started when Sam played for Edinburgh University, to which he said, “I was playing for Edinburgh Uni 2s at the time and we were playing ‘Dale 2s.  I remember thinking that this was a team that was serious and competitive on the pitch, but that off the pitch they were really friendly and relaxed.  And there aren’t many teams that lay on a match tea.”

Fast forward a couple of years later in 2016, when Sam moved to Glasgow to study Pharmacy at Strathclyde University, he found himself on the right side of the city and was soon signed up for Clydesdale, starting in the Men’s 2nd XI.  Half a season later, he was promoted to the Men’s 1st XI.  “It was a big jump.  I had to persevere and grow into it.  And sometimes I played for the 2s which I really enjoyed too.  Callum McLeod was important for me as his calm head definitely got the best hockey out of me and I started playing better and began to cement my place in the team.”  Like many of the 1s players, Sam – originally from Dunfermline – has (most probably) put in over 10,000 hours of hockey practice over the years.  But when he was in Primary 7, Sam was a promising young footballer with Dunfermline FC juniors, which he points out “were good in those days”.  But he hung up his football boots when Dunfermline hockey legend Keith Forster recruited him from St Margaret’s Primary School.

We’re glad that Sam had many good years with Dunfermline Carnegie and with Edinburgh University too. But now we’re claiming him for our own and can promise him many more good years to come with Clydesdale.