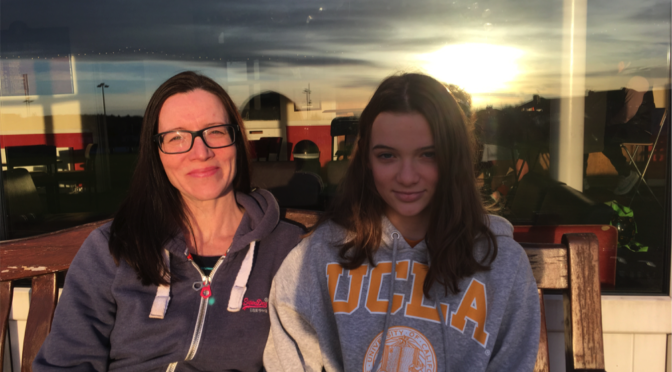 Next up in our Player Profiles series is a mother and daughter duo – Marnie Moulson has recently returned to hockey, which coincides with Marnie’s daughter, Skye and her start to playing senior hockey regularly for Clydesdale Western.  Ally Walker met up with the two to talk about hockey and life at Clydesdale & Clydesdale Western Hockey Club:

After 15 years in the hockey wilderness, Marnie Moulson has a hockey stick in her hand again and she’s loving it!  Coached at school by Wendy Justice, Marnie had a good start to hockey but she was also keen to thank Peter Justice and Neil Menzies for their valuable coaching input over the years.  After playing for Hillhead whilst she was at university, Marnie followed some of her West District friends to Glasgow Western Ladies (as it was previously known before the merge of Clydesdale and Glasgow Western) in 1995, where she played predominantly for the 2nd XI for eight years and included the highlight experience of playing in the European Club Championships in 2000.

Over the last decade and a half, Marnie has been juggling her job as Software Engineering Director with JPMorgan Chase, travelling back and forth from the United States, being mum to Skye and her son, Ben whilst keeping fit with trail running, triathlon and open water swimming.

However, she’s back in the hockey fold and playing in midfield for the 4th XI.  And we have the rest of her family to thank for that.  Husband Colin, a former club captain with the Men’s 1st XI, came back to ‘Dale with a bang in 2017 and played with the Scotland Over 40s team in the Masters World Cup in Barcelona last summer.  That same summer saw Skye and Ben attend Clydesdale’s Hockey Camps, followed by Friday Night ‘Jockey’ and the rest is history.  Colin is now a forward with the Men’s 2nd XI, Skye plays midfield with the Ladies 6s and Ben plays wherever he’s needed for the Men’s 5s.  Marnie said, “I was spending most of my time hanging about ‘Dale watching games and dropping off and picking up.  So it didn’t take too much encouragement from the family to get me to dust off my hockey boots!”

Now, Marnie is an enthusiastic advocate for women’s hockey. She added, “The L4s is a brilliant mix of youth and experience, although it was a bit of a physical shock to have to keep up with the 17 year olds!  After a game it was often a case of icing everything as pretty much everything hurt!  However, I’m really enjoying the camaraderie of playing with people I’ve played with in the past as well as having the opportunity to encourage the younger players I’m getting to know.  I believe it’s incredibly important that young women enjoy and stay with competitive sport – where else do you get a chance to let off steam with 15 other women at the weekend?!”

Skye is very supportive of her mum’s return to hockey, although admits that a warm up with a hot chocolate after her own game tends to win out over watching Marnie’s own game.  Skye said, “Hockey at ‘Dale is great because it’s really good to have another group of friends out of school.”   As we wound up our chat, Marnie and Skye got ready to head over to the Lagoon Leisure Centre to watch Colin and Ben playing together in the same indoor team.  Hockey certainly seems to be a family affair for the Moulson’s.  And that is as it should be – after all, it all started on the Clydesdale steps in 2000 when Colin proposed to Marnie at Fireworks night!