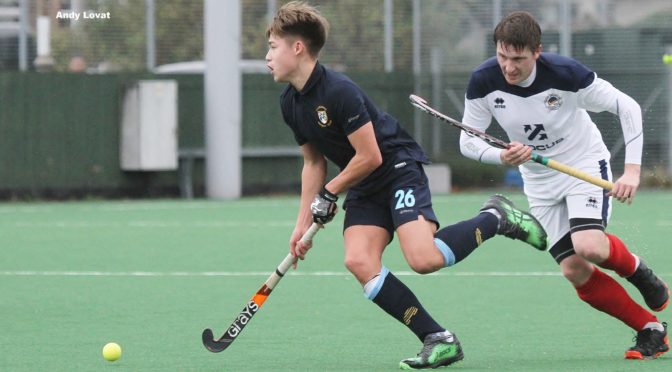 ‘Player Profiles’ continues with another 1st Men’s player. But unlike the last time, the focus is on a youngster – hot prospect Ben Galloway. 2018-19 proved to be Ben’s breakthrough season in the Men’s 1st XI, and Ally Walker caught up with him to talk about the season he had, as well as a number of other aspects in Ben’s day to day life.

Just under two weeks ago, 15 year old Ben Galloway scored his first goal for the 1s against Watsonians at Peffermill Playing Fields – and it was no tap in!

When I asked him, like all strikers, he was able to tell me exactly how it happened: “I picked up the ball at the half way line, ran it past a player and into the D. I took it to the top right hand side of the D and roofed it over the keeper’s head. It was my best hockey moment so far.”

And Ben has had lots of hockey moments – from early days with Fiona McCrae and Peter ‘PJ’ Justice at Shawlands Academy indoor training, all the way through the M6s, M5s, M4s, M3s and M2s. But 2018/19 has been a big year as he stepped up from last season when he played mostly for the M3s. Ben turned out eight times for the 1st XI during the 2018-19 season and is thrilled but acknowledged the big jump: “The speed of the game is so much faster and everyone is “in the moment” all of the time. You always have to know what your next move is going to be.”

Whilst it’s a challenge, Ben credits coach Ciaran Crawford for helping him grow his confidence. “I was shocked when Ciaran first called me up to play for the 1s but knowing that Ciaran has confidence in me, helps me feel I deserve to be here.”

Ben is currently in the Scotland U16s squad and is all set to head off to Cardiff over Easter weekend for a series of games against Wales, with further fixtures against England, Ireland and Ulster also on the programme for the summer. It’s Ben’s second year in the U16s and he enjoys both the hockey and the friendships. “I’ve got a good group of friends in the U16s. We’ve spent a lot of time together and we understand each other both on and off the pitch.”

Last year, his Clydesdale and Scotland experiences came together nicely, he said: “Struan (Walker) and I played together, probably as under 8s in the Shawlands hall, and then last summer we faced England together with our Scotland U16s shirts on!”

It’s an impressive hockey CV but Ben is also a Scottish swimming champion and has just picked up a clutch of team and individual medals in the 15s age group in the Scottish Nationals. To achieve that, he’s poolside at 5.15am three mornings a week with a further three evening sessions too. He’s let off one session a week so that he can go to hockey training. Unsurprisingly, his stamina is pretty sound!

I felt exhausted just talking to him about his training in the pool and on the pitch – and there’s the small matter of National 5s coming up the track too.

Ben clearly has the ability to manage both hockey and swimming at national level and finds the sports complement each other well. However, his final comment about hockey was insightful and I think expresses something that all ‘Dale players feel about the game.