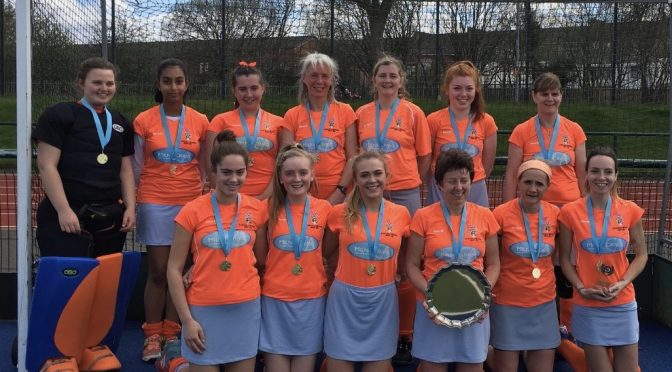 Unfortunately, there was no weekend preview written in time, but what we have done has reviewed Saturday’s results plus we have previewed Sunday’s games – all of which are at home.

Clydesdale Western 4s completed their excellent second half to the 2017-18 season with a 4-0 win against Stepps 1s in the Ladies West District Plate Final at Hutchesons’ Grammar School.

Goals from Ann Menzies, Sharon Duncan, Sarah Kelly and Claire MacDonald gave the L4s a deserved win to take the Plate.  MacDonald was also nominated Player of the Match at the end of the Final.  Congratulations to all involved in the L4s, especially to captain Marg Taylor.  Commiserations to Stepps 1s.

Clydesdale Men’s 1s produced a fantastic goalscoring display to beat Hillhead 1s at Old Anniesland and boost their hopes of avoiding dropping into a relegation play off place in Men’s National Division One.

Clydesdale got off to a flyer, finding themselves 2-0 up following excellent strikes from youngster Struan Walker – one on front stick that flew in to the roof of the net before doubling his tally with an upright reverse.  The home side pulled one back through a defensive mistake after a Hillhead forward managed to squeeze a goal in from the baseline.  But the M1s scored another two to pull well clear by the end of the first half.  Walker completed his hat-trick with an effective mishit, whilst Chris McFadden found the top corner from a penalty corner.

In the second half, the M1s made it five after Danny Cain recovered a wayward penalty injection to send a reverse stick shot into the bottom corner.  Hillhead did get their second following good work down the right hand side.  Their forward escaped the attentions of  Clydesdale’s left back, before driving into the D and pulling the ball back to a Hillhead forward who tapped in at the back post.  Clydesdale scored their sixth and final goal through Sam Hayes.  Much like Hillhead’s first goal, Hayes escaped a few challenges on the baseline before having his shot inadvertently deflected in by a Hillhead defender.

Clydesdale Western 1s kept their league challenge hopes alive after coming from behind to beat Hillhead 1s at Glasgow Green.

The L1s were 1-0 down with 20 minutes to go, despite generally good play from the visitors.  And their good play was eventually rewarded with three late goals from Lexi Sabatelli, Millie Steiger and Heather Howie.

The result keeps ‘Dale Western five points behind Edinburgh University, who are in top spot of Women’s National Division One with two games to play.

Clydesdale Men’s 2s faint hopes of winning the Men’s Regional Division One title are officially over after losing to league leaders Watsonians 2s early on Saturday at Titwood.

The contest was fairly even before Watsonians scored twice within the space of ten late first half minutes.  A Watsonians forward found space to reverse high before another forward deflected in after build play following a long corner.

Despite the M2s stepping up pressure, the home side could not find a way through despite chances for Colin Moulson, captain Adam Docherty and Andy McAllan.  The away side held on to give themselves a valuable three points in their bid to be champions at the end of the season next weekend.

A goalkeeper-less ‘Dale Western 2s started the game brightly, but Uni 2s capitalised on a loss of possession to take the lead.  The home side did hit back after an initial chance for the home side broke to Annabel Ballantyne who lifted the ball over the ‘keeper.  In the second half, the away side kept a better shape which brought rewards after they scored two goals midway through the second half to seal an important win.  The results sees Edinburgh Uni 2s go top on goal difference above Clydesdale Western 2s.

Four games on Sunday, all of which are at home.

At noon, the L3s play league leaders of the Women’s Championship Division One table, Edinburgh University 2s following their previously mentioned 3-1 win against the L2s.

The L1s then take on Edinburgh University 1s from 1.30pm.  Clydesdale Western 1s need to beat Uni 1s and hope for another favour the following weekend if they are to be champions of Women’s National Division One.  For Edinburgh Uni, however, a point will be enough for them to be crowned champions with their five point lead over Clydesdale Western.

Clydesdale Men’s 1s face Edinburgh University’s Men’s 1s, 3.00pm pushback.  Clydesdale bounced back from defeat to Menzieshill after their win against Hillhead, and a win here would guarantee their safety from relegation play-offs in the Men’s National Division One league.  A point may also be enough if results around them go their way.  Their opponents are 7th and a win here would be more than welcome in their bid to also avoid relegation play-offs.

And completing the full card of games is the M2s against Western Wildcats 2s – 4.30pm start.  A win for the home side would effectively seal a top 3 finish in Men’s Regional Division One.  However, a win for Western Wildcats would boost the away sides hopes of avoiding relegation from Regional One.

Good luck to all of our teams on Sunday.  And once again, massive congratulations to the L4s and everyone associated with the squad.