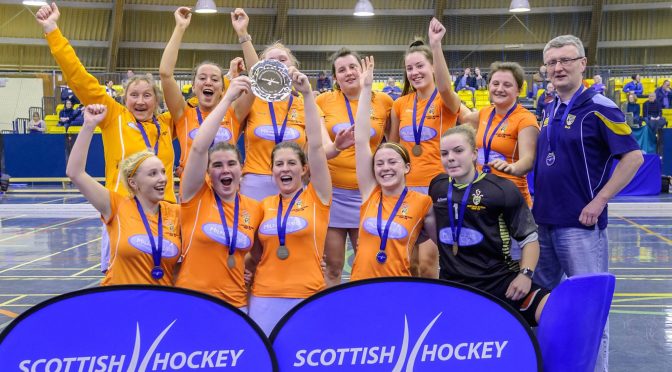 Millie Steiger got on the end of a sublime solo run and pass from Jen Eadie with no more than 30 seconds on the clock remaining to settle a thoroughly entertaining contest that looked to be heading to running penalties. Dundee Wanderers produced a stirring fightback to pull themselves level before half time after going 2-0 down in the opening quarter, with a goal each coming from Margery Justice and Holly Steiger that gave ‘Dale Western the best of starts to the game. The drama would continue in the fourth quarter when Wanderers missed a flick that was awarded following a miraculous, yet unavoidably illegal, goal-line save from L1s skipper Frances Lonergan. The game could have gone either way, but the defining moment of the game saw Millie Steiger lift home after collecting Eadie’s pass to seal the win for their side right at the death, ending what was a great advertisement of women’s indoor domestic hockey.

With the majority of the squad being the same personnel from the past two seasons, the question before the start of the game was going to be which Clydesdale Western side would turn up – the one that produced a gutsy display to win the 2018 title, or the one that were overpowered by Wanderers the following year? With the way Sunday’s Final began, it would be the former as it took less than a minute for the Titwood girls to score the game’s opening goal. Julie Lonergan played a pass to Kayleigh Justice, who in turn squared the ball for sister Margery to send a powerful shot low into the corner.

The L1s first quarter dominance continued when Margery Justice stole possession from Wanderers and produced a splitting pass through the middle of the court that saw Holly Steiger deflect in and double their side’s lead.

But Wanderers showed their fighting spirit to respond twice in the second quarter. Vikki Bunce’s powerful run from left to right ended with the veteran sending a shot low past Jessica Buchanan before Amy Snell scored an almost carbon copy goal to level before the break. The game ebbed this way and that, as Wanderers pushed hard to take the lead for the first time in the contest, whilst ‘Dale Western produced some slick and polished hockey throughout the court, especially within their own half, but lacked composure in Dundee Wanderers circle to regain the lead.

With no goals in the third quarter, the final ten minutes saw a Wanderers forward find herself one on one with Buchanan, before rounding ‘Dale Western’s number one and lifting a shot towards the goal. Frances Lonergan produced a stunning goal line save with her reverse stick to save the shot, but in doing so appeared to put an extra point of contact on the ground – such was her momentum – and resulted in the award of a penalty flick. The flick, however, was put wide and the contest remained level until the final 30 seconds, when Eadie collected possession in her own circle, ran the length of the court before squaring the ball to a grateful Millie Steiger who lifted low to seal the indoor crown.

Following a long and hardworking season, the win sees Clydesdale Western claim the top prize of Women’s Indoor in Scottish Hockey for the first time since 2018, and will be Scotland’s club representative in next year’s European indoor competition.

The M1s found themselves 2-0 down, but rallied through Struan Walker’s hat-trick to take the lead. Watsonians briefly equalised, before Ben Galloway added a fourth for ‘Dale. The Edinburgh side responded even quicker than the first equaliser, to send the tie to running penalties before sealing a 2-1 in the shootout. The loss means Clydesdale will play their indoor league hockey a division lower for next season, with Watsonians taking their place.

It was a fairly even start, but Watsons took the lead when Fraser Sands’ penalty corner attempt crept over the line, despite the best defensive intentions from the Titwood boys. Chris McFadden had short corner chances either side of the game’s opening goal, but neither were taken. And the pressure was beginning to show as Sands added a deserved second for his side from another penalty corner.

Both sides exchanged chances until Struan Walker grabbed his first goal of the game with a powerful drag flick short corner before half time. Walker then showed the composure to level the score into the third quarter with a measured flick past the Watsons goal-line defender before completing his hat-trick by rounding the goalkeeper and lifting into the goal to give his side the lead for the first time in the game. Clydesdale switched off not long after, as a pass across the goal saw Dave Patterson convert from close range at the back post.

The M1s regained the lead from Ben Galloway’s smart finish, but Sands completed his hat-trick no longer than a minute after to level the scores once more, and that was how it would remain up to the final whistle.

The running penalty contest saw both sides score their first, before Watsonians missed their second. David Nairn’s attempt was illegal stopped by the Watsons goalkeeper resulting in a penalty flick award, but the flick was missed. The Edinburgh side retook the lead before Clydesdale missed their final attempt, confirming their relegation to MNIL 2.