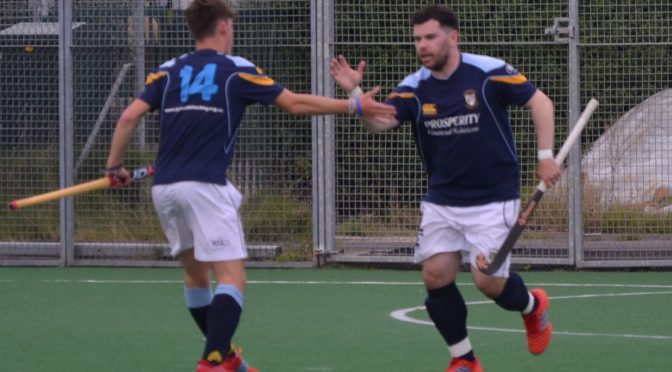 The Men’s 1st XI once again came back from a goal down to beat Uddingston at Titwood on Saturday.

A scrappy first half ended with Uddingston taking the lead through a Steven Percy penalty corner.  Clydesdale regrouped after the break, and equalised not long into the second half through captain Patrick Lonergan.  Lonergan sprinted past the Uddy defender with ease before having his attempted pass in the penalty circle inadvertently  deflected in by an Uddingston player.  It looked as if the game would finish with a share of the points, however the home side won a penalty corner in the 69th minute.  Ciaran Crawford slotted the corner into the visitors goal, his sixth of the season, and that was how it remained when the final whistle went.  The win sealed back to back league wins and a third win in a row in all competitions.

The Lades 1st XI bounced back from their heavy defeat at Edinburgh University two weeks ago by thrashing GHK at Titwood on Saturday.

The pick of the goalscorers was Millie Brown who scored a hat-trick.  There was a goal each too for Lexi Sabatelli, Ali Howie, Lucy Lanigan and Anna Logan as the girls ran out comfortable winners.  The win coupled with other results elsewhere has seen Clydesdale Western close the gap at the top end of the table.

In the rest of Saturday’s results, the M2s drew 2-2 with Edinburgh Uni 2s at Peffermill despite a dominant performance.  Scott Lindsay and Fraser Cowle scoring as the 2s had to settle for a point.  The 3s recovered from going 2-0 down to beat Hillhead 4s 5-2 at GHK.  Jeetinder Berman, Michael O’Donovan and Lewis MacKay scored in the first half, before MacKay and Berman each added a second goal to give the 3s all three points.  Colin Moulson scored his fifth goal of the season in a 3-1 win for the M4s against Hillhead 6s – Ben Mitchell and David Sturgess were the other scorers.  And the M5s went down 6-3 in an entertaining game against Hillhead 7s.  In the Ladies games, the L2s hammered the L3s at Titwood by nine goals.  Anna Hoolaghan scored a brace whilst there was one each for Christy MacKinnon, Tia Mansbridge, Lesley Cosh, Gillian Green, Helen Walker, Julie Lonergan and Abi Harrowell.  The L4s lost 4-2 away to Hillhead 4s despite goals from Ann Menzies and Marg Taylor.  The L6s were on the receiving end of a 14-1 scoreline away to GHK 3s – Iona Denholm scoring a consolation.

Great effort from all of our teams!