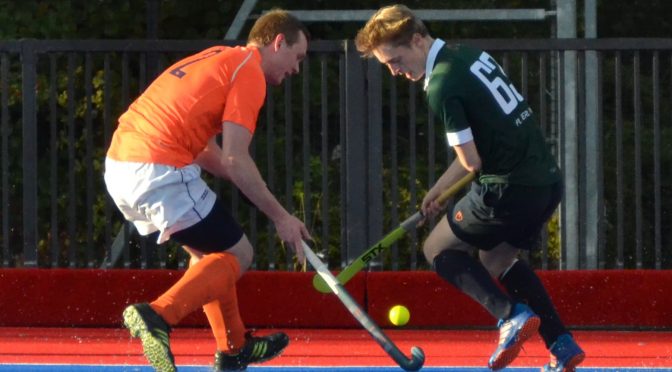 Clydesdale secured their first win of the season with a hard fought win at Peffermill.  After an even start, Edinburgh Uni went ahead in the 20th minute.  From then on, Uni had the lion’s share of the possession in a tightly contested game.  There were yellow cards for Uni’s Gordon Amour and Clydesdale’s Aidan Black as both sides vied for control of the game.  Clydesdale defended well throughout the second half and came into the game later in the half.  Chris McFadden converted a short corner after the hour to level the scores before scoring another PC with four minutes to go. The win moves Clydesdale up to eighth in the League.  Hillhead and Inverleith remain pointless whilst ‘Dale, Dundee Wanders, Edinburgh Uni and Uddingston are tied all on 3 points.

Next week’s game is at home to Uddingston (16:30 PB) who had a big 7-2 win against Inverleith on Saturday but lost 2-3 to Menzieshill the following day.

In the other games on Saturday, the rest of the men’s section had a forgettable weekend as the remaining four teams all lost.  The 2s went down 3-2 to Grange 3s at home.  The home side were quickly 2-0 down, but got one back through new boy Alex Ingram – his fourth in four games.  However, Grange quickly restored their two goal lead not long after.  The lead remained until six minutes to go when Johnny MacKay converted from close range after a long spell of ‘Dale pressure.  But that was how it was to remain as the 2s suffered their first defeat of the season.  The 3s also lost their first game of the season as a distastrous start at Uddingston left the 3s 3-0 down within 15 minutes.  Scott Crossan scored five minutes before halftime, and then ten minutes into the second half the 3s won a penalty flick.  David Christie’s flick was saved by the goalkeeper, but the 3s eventually got their second through a Michael O’Donovan short corner strike.  That one goal deficit lasted no longer than a minute as a lapse in concentration gave Uddy their fourth before going on to score another three without reply as Uddy ran out comfortable winners.  The 4s and 5s were also beaten in their games – 2-0 by Greenock 2s and 5-0 by Giffnock 3s respectively.

The only girls game was the Ladies 5s away to Ayr 2s – the 5s winning 5-0.  Katrina Meikle scoring a brace, whilst there were goals for Sarah Kelly, Sarah Lonergan and Lauren Halley.

Well done to the Men’s 1s and Ladies 5s, hard lines to the rest of our Men’s teams.  Full card of games next weekend, so keep your eyes peeled on our website and social media outlets for more info.