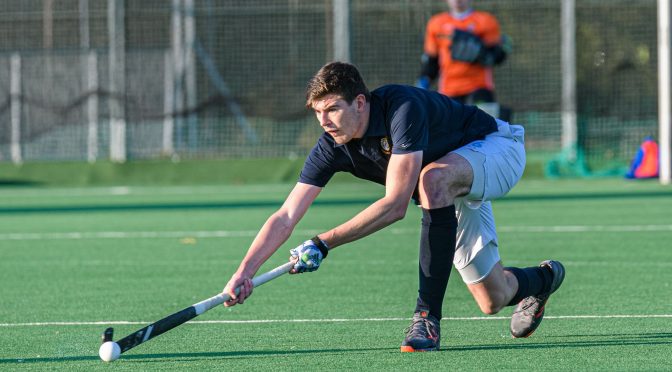 Clydesdale Men’s 1s ended a run of three straight losses in the Men’s Premiership with a narrow 2-1 win at home to Hillhead 1s on Tuesday night.

The re-arranged fixture produced a goal each from David Nairn – albeit somewhat fortuitously – and Chris McFadden that lifted Clydesdale from eighth to fifth in the Men’s Premiership table.  The M1s are three points off a top four spot, but having played a game extra than their nearest rivals Western Wildcats.

Going in to the game, the home side were without Andrew Allan, Dean Baber, Struan Walker and Ben Galloway.  But youngster Ian King came in for a home debut for Clydesdale Men’s 1st XI.  The contest between Clydesdale and Hillhead proved to be a fairly tense and cagey affair throughout, but the M1s did start the brighter of the two.  And with that bright start brought the game’s opening goal.  Midfielder Sam Hayes smashed a ball from outside the circle before a disputed touch resulted in a goal being awarded for David Nairn.  Hillhead almost responded a few minutes later, when a scooped pass found a forward unmarked in the ‘Dale circle.  But his shot was saved well from close range by Clydesdale’s Sean Mahoney in goals.

In the second quarter, the visitors levelled.  Picking up possession a third of the way from the home side’s goal, a pass was played to a Hillhead forward on the baseline.  The baseline was ran before another pass was dropped to a Hillhead player arriving late into the D, before lashing home a first time shot into the roof of Mahoney’s goal.  The equaliser lasted as long as three minutes when the Titwood boys won two penalty corners in row – with the second PC being converted by a drag flick from defender Chris McFadden.

The M1s saw the advantage all the way to half time, and saw out the third period without too much drama but were not quite at their full flowing best, with chances becoming quite limited for both sides.  The fourth quarter saw Hillhead step up the pitch to try and force a second equaliser back.  Clydesdale admittedly became sloppier in possession, with turnovers becoming more frequent than wished for.  Hillhead failed to capitalise to full capacity, with their only notable clear cut chance coming from a penalty corner in the final minute.  A drag flick was attempted by Hillhead, but Mahoney made a decent save before ‘Dale saw out the win.