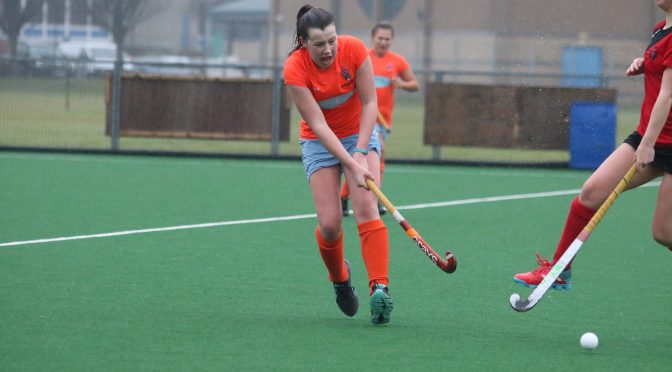 Four outdoor games and four outdoor wins as the M3s and L5s keep up with the pacesetters, whilst M4s hold their big lead at the top.

Ali Bleach struck two second half penalty corner strikes to give the Men’s 3s a valuable three points at Titwood against Ayr.

Although the 3s had the majority of possession in the first half, it was the visitors who scored the opening goal.  Two of Ayr’s forwards combining effectively to pass the ball around the helpless Mick Kelleher to leave the M3s a goal down at half time.  But an early penalty corner for ‘Dale in the second half was converted by Bleach, before he struck 10 minutes from time with a second PC despite being temporarily down to 10 men.  The 3s held on for the remainder of the game to see out a 2-1 win, which now sees Peter Justice’s team up to 3rd in the Men’s West District Division One table.  The M3s are 4 points behind league leaders Uddingston 3s.

The M4s opened a 16 point gap at the top of Men’s West District Division Three after Christopher Richmond’s double gave them a narrow win over Giffnock 2s at Titwood.

The 4s raced into a two goal lead by half time, courtesy of Richmond’s sixth and seventh goals of the season.  Giffnock 2s, however, responded in the second half through a penalty corner.  Despite a nervy finish, the M4s saw out a narrow win to leave them in a greater position to promote from West District Division Three as champions.  The M4s are unbeaten in their last eight league games (seven wins, one draw).

Clydesdale Western 5s sit 2nd in the Women’s West District Division Three table after an excellent win over league leaders Uddingston 2s was followed by a routine win over Irvine 1s at Titwood.

The L5s knew two wins over the weekend would bring them level with Uddingston 2s at the top of the table, with only goal difference separating the two sides.  Incidentally, it was Uddy 2s who were the L5s first opposition of the weekend.  The Ladies 5s produced a superb team display to give them a deserved first half lead after Sarah Kelly had collected Jessica Kelly’s pass to send an upright reverse finish past the Uddingston goalkeeper.  The L5s then doubled their lead in the second half through Lauren Halley’s short corner strike.  Uddingston 2s, in reply, could not break down what was a resolute defensive performance by the L5s.

On Sunday, the L5s put eight goals past Irvine with Halley scoring four.  Sarah Kelly, Jessica Kelly, Annie Lonergan and Kirsty Scott were the other goalscorers for the L5s.  The L5s have now won their last five league games, and are unbeaten in seven league games (six wins, one draw).