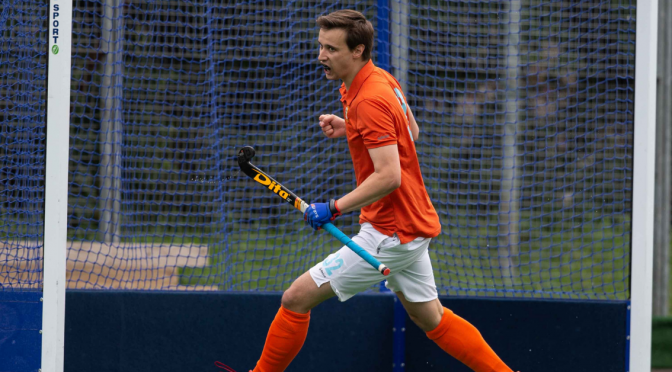 Clydesdale Men’s 2s comfortably saw off Watsonians 3s to record their third win in as many Men’s Regional Division games at Titwood on Saturday.

Despite a number of regular 2s personnel unavailable, goals from Neil Morton Lloyd, Owen Gould and Johnny Bradley helped their side record back-to-back 3-0 victories. The result takes Stuart Banford’s side to the top of the Men’s Regional Division by goal difference.

Going in to Saturday’s clash with Watsonians 3rd XI side, the M2s were without over a handful of players including captain Alex Ingram, Blair Paul and Adam Docherty. But the home side started Saturday’s contest on the front foot and it was no surprise when they took the lead through Morton Lloyd’s reverse stick shot into the top corner shortly into the second quarter. Clydesdale 2s then doubled their lead when youngster Gould – making his first start of the season following a successful league winning cricket campaign for Clydesdale – slotted home a dragged flick penalty corner.

The contest was effectively over just after half time when Bradley got the M2s third goal. The scoreline could have arguably been more as the home side passed up a number of goalscoring opportunities. Thankfully, it had no major bearing as the Titwood side kept a strong defensive unit to record a second clean sheet on the bounce and see out the win.

Clydesdale Western 2s maintained their impressive start to the Women’s Championship season with a win against Waverley Inveresk Trinity 1s at Edinburgh Academy.

The L2s notched up their third win in three games following a 5-1 scoreline against Waverley. It was the second time in a row that Donald Amour’s side have scored five goals this season following their 5-0 win last Saturday against Grove Menzieshill 2s.

Despite missing the in-form Rachel Whittle, defender Hannah MacDonald and youngster Elise Fitzgerald, goals for the L2s came from Lucy Bliss (two), Rhona McGregor, Emma Murray and Rosie Tudor. The victory now sees ‘Dale Western 2s at top of the Women’s Championship, three points clear of Edinburgh University 2s, albeit having played a game more than the student side.

Edinburgh University 2s proved too strong for a depleted Clydesdale Western 3s at Peffermill in the Women’s Championship.

Nearly two squads worth of players were unavailable for the L3s against Uni 2s, who themselves possessed a typically strong squad. The L3s held their own by half time, however. Despite conceding two goals in the first quarter, a goal from Jessica Molloy reduced the deficit and the away side were well in the contest.

But the home side’s strength in depth coupled with only one available sub for ‘Dale Western 3s took its toll in the second half and student side added a further five goals to their tally to run out comfortable winners.

Clydesdale Western 4s went toe-to-toe with Ardrossan 1s in their opening game of the Women’s West District Division One season at Titwood on Saturday – but sadly lost out in a game that produced nine goals.

The L4s were without a host of players, most notably veterans Wendy Justice, Maureen White and Cath Stirling. But the home side still possessed a strong squad with the likes of Ellen Murray, Ann Menzies and captain Marg Taylor all available for their match up with Ardrossan.

Murray and Menzies both showed their value to ‘Dale Western 4s by scoring a goal each. Claire MacDonald, returning after a lengthy absence, also got on the score sheet, whilst youngster Phoebe King scored her first ever goal for Clydesdale Western at senior level. However, four goals for Taylor’s side, amazingly, was not enough as Ardrossan went one better to register a 5-4 win and take maximum points.

Clydesdale Western 6s left empty handed following their Women’s West District Division Three game with Uddingston 3s – but will have left wondering how after a terrific performance at Titwood on Saturday.

From a squad of fifteen L6s players, twelve members were still under the age of 18. Four of those twelve were making their first ever senior appearance at club level.

All the more impressive as the home side put in a fantastic effort. In actual fact, it was difficult for any L6s player to be singled out for praise, such was the notable performance produced by ‘Dale Western 6s as a team.

But sadly, the performance did not produce a result as Uddingston 3s scored the game’s only goal to take the win away from Titwood.