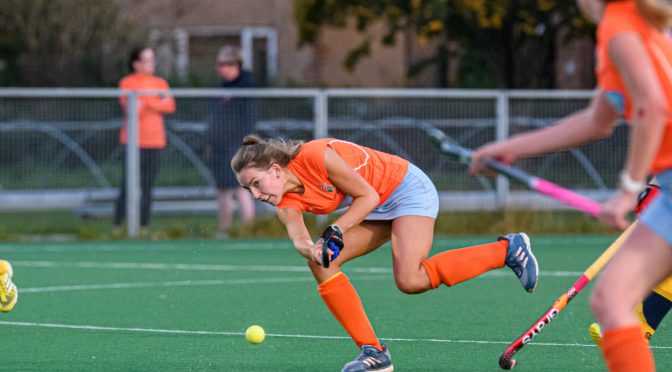 Clydesdale Men’s 1s registered their fourth win in a row against Kelburne 1s on Saturday at Glasgow Green – which in turn gave them back to back league wins in the Men’s Premiership this season and put them firmly in the race for a top four Play-Off spot.

Doubles from Struan Walker and David Nairn as well as a goal each from Chris McFadden and Euan Lindsay gave the M1s a 6-3 scoreline. The result – as well as others in the Men’s Premiership – takes Ciaran Crawford’s side up to fifth in the table, three points behind fourth placed Edinburgh University. The win was also Clydesdale’s fourth win in a row in all competitions against Kelburne, dating back to the two sides Scottish Cup Quarter Final meeting in March 2018.

The Titwood boys would have been in buoyant mood following their narrow 2-1 win nearly a fortnight ago against Hillhead, ending a run of three league losses. Andrew Allan returned to the starting squad in a game that started with a predictably high tempo before the M1s took the lead. Walker – also returning to the squad having missed the Hillhead match – found himself in space on the penalty spot before calmly slotting to give Clydesdale the lead. Not long after, McFadden then scored a penalty corner to double their advantage. Two became three in the second quarter when Nairn then produced a superb goal, beating four defenders before scoring across the goal with a reverse stick shot.

Kelburne then got back into the game by responding from a penalty corner to reduce the deficit back to two goals. The away side continued to create scoring chances after, and eventually took one when Nairn grabbed his second of the game. The Paisley side scored the sixth goal of the game, with a counter attack that continued all the way to the baseline, before a cutback to the penalty spot saw a forward on the home side finish past Sean Mahoney. Walker then matched Nairn’s tally, but only from a quick reaction rebound at chest height after the latter’s initial shot was saved. Lindsay then got in on the act towards the end, picking up a pass in front of Kelburne’s goalkeeper before spinning round and finishing. The home side did score a consolation at the end after a well flicked penalty corner was put in to the far corner of the ‘Dale goal.

Clydesdale Western 1s produced another scintillating performance in front of goal as they hammered Glasgow University 1s at Glasgow Green to maintain top spot in the Women’s Premiership.

‘Dale Western scored eleven goals without conceding against the student side to keep their three point advantage over current champions Edinburgh University. Following up from their 12-0 win against Grove Menzieshill the previous weekend, the L1s have now scored a gobsmacking 23 goals in two games.

Jen Eadie scored hat-trick, whilst there were goals for Lexi Sabatelli, Naomi Harkness (both two each), Karin Belch, Bronwyn Shields, Ali Howie and Susie Allan (all with one goal each). The Titwood girls scored an early goal, which effectively set the tone for the remainder of the contest, before adding four more before half time with some flowing team moves. The second period saw chances few and far between, but all the more impressive as Clydesdale Western went one better in their second half tally to record a double figure win.

The performance and result will have most certainly pleased Head Coach Derek Forsyth, who gave a debut to young goalkeeper Cara McAllister. McAllister came in for regular L1s ‘keeper Jessica Buchanan, who was ruled out with injury, to record a clean sheet in what was an extremely comfortable day for the youngster and her teammates.

There were big wins for three of our Clydesdale & Clydesdale Western teams on Saturday.

The M2s and L2s both scored five goals each in their wins against Grove Menzieshill 2s and Watsonians 2s respectively at Titwood. The M2s produced a brilliant display in Men’s Regional Division One against Menzieshill as reverse stick shot goals from Colin Moulson and Aidan Black gave the home side a 2-0 lead, before defender Neil Fulton crashed in a corner right before half time. In the second period, Ian King scored a rebound from a PC and Fulton again scored with a carbon copy of his first goal, capping off a professional display from the M2s. The result sees Stuart Banford’s side up to fourth in Regional One, five points off top spot.

The L2s finally hit top form against Watsonians 2s to jump up to fourth in the Women’s Championship Division One table. Kate Moffett scored from close range early on at Titwood, before Holly Steiger and Lucy Arnold made it 3-0 going in at half time. Mairi Fletcher then scored with an impressive reverse deflection in the second half, whilst Steiger showed quick reactions to deflect front stick for her second goal and her side’s fifth goal of the game. Watsonians 2s scored a consolation from a penalty corner to complete the scoring at 5-1. The L3s, in the same competition as the L2s, played out a goalless draw away to George Heriots FP 1s.

The L5s are now second in Women’s West District Division Two after a sublime 10-1 win over Giffnock 1s at Hutchesons’ Grammar School (HGS). Lauren Halley and Rachel Brown both scored hat-tricks, whilst there was a goal each for Helen Hood, Christine Pender, Catherine Clark and Carla Foxworthy. The L4s are top of Women’s West District Division One after a nail biting 3-2 win at home to Uddingston 2s. A goal each from youngsters Anna Winter, Aaliyah Sandhu and Zoe Monaghan made it four league wins from four to maintain their side’s 100% start to the season.

Elsewhere, the M3s in Men’s West District Division One rescued a point in a 1-1 draw at home to Strathclyde University 2s. Johnny Bradley was on hand to cancel out Strathy’s goal, which keeps the M3s above the student side in fifth place. The M4s had it slightly tougher against Hillhead 4s at Lower Windyedge in Men’s West District Division Two, losing out 5-1. The young away side, to their credit, maintained a competitive performance throughout but could not contain what was a strong Hillhead 4s team. The L6s were the same in terms of competition, but sadly also the same in the results stake after they lost out at HGS to Arran 1s in Women’s West District Division Three. The L6s lost 6-3, despite a brace from Anne Sturgess and a goal from Alex Campbell.