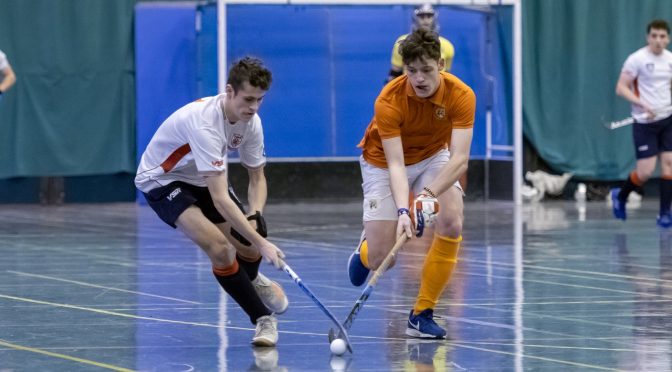 Clydesdale Men’s 1s hopes of securing a Championship Semi Final spot in the Play-Offs of Men’s National Indoor Division One are all but over after losing to Western Wildcats 1s and Inverleith 1s respectively at Bell’s Sports Centre on Saturday – losses which have now left them potentially facing a Relegation Play-Off.

Having been drawn in Pool A, the M1s carried over four points from the set of classification matches going into their first set of Pool matches. Hopes would have been high at the prospect of putting themselves into a position to secure a Semi Final Play-Off spot in the Championship round for the first time. But ‘Dale were beaten 5-2 by Wildcats before losing 11-4 to runaway Pool A leaders Inverleith.

Coinciding with other results that occurred in Pool A, Clydesdale are now bottom of their group, still on four points. Ahead of the M1s are Western, who sit on six points, and then Grange with seven. Inverleith have twelve points and with one game remaining sealed top spot and one of four Semi Final spots.

With one game remaining, the Titwood boys need a win against Grange coupled with an Inverleith win over Western Wildcats to avoid a Relegation Play-Off. Clydesdale can still finish second as well, which would secure the remaining Semi Final spot in Pool A, but would need to beat Grange by a difference of six goals. The last time the two sides played in the indoor season finished with a 3-3 scoreline.

Clydesdale Western 2s got the point they required to avoid relegation from Women’s National Indoor Division Two at Bell’s Sports Centre on Sunday.

The L2s played out a 0-0 draw with fellow relegation candidates Grove Menzieshill 2s. But the share of points saw both sides confirm their survival for another season.

‘Dale Western 2s followed that draw up with a 3-0 win against Inverleith 2s before narrowly losing 3-2 to Granite City Wanderers.

The L2s finished 6th in the final standings of WNIL 2, with 15 points from 14 games.

From the seven games that took place in West District leagues, only two Clydesdale and Clydesdale Western teams managed to secure, at most, a point over the weekend.

The M3s were closest to collecting three points in an entertaining game with Western Wildcats 3s in Men’s West District Division One at Titwood. Rory Harris finished impressively at an angle on his reverse stick to give his side an arguably deserved 1-0 lead. Wildcats responded in the second half from a well taken penalty corner, but Colin Moulson regained the M3s lead with his sixth goal of the season. The away side levelled for a second time from another excellent corner and the scoring finished there, meaning both sides had to settle for a point. The M3s now drop a place in the table to the 7th.

The M4s drew 0-0 in a bottom of the table clash in Men’s West District Division Two against East Kilbride 1s at Titwood. Both sides had chances but both goalkeepers were in fine form to keep clean sheets. The M4s remain 11th in the league table.

At Glasgow Green, the M5s – similar to how their season has been going – put in a decent display but lost to Kelburne 6s in Men’s West District Division Three South. The Paisley side scored four unanswered goals, meaning the M5s stay 6th in the table.

All four Clydesdale Western games, meanwhile, ended in losses. The L4s lost more ground in the title race in Women’s West District Division One after a 2-0 defeat at home to Glasgow University 3s. The L4s remain 2nd in the table, but are now six points off top spot having played a game more.

The L5s are still 8th in Women’s West District Division Two after losing 3-1 away to East Kilbride at Duncanrig High School – Rachel Brown’s seventh goal of the season being in vain.

There was a double header for the L6s at home on Saturday and Sunday but both ended with zero points. Against Hillhead 4s on Saturday, first half goals consisting of a short corner strike and an open play finish from the top of the circle was enough for the visitors to win 2-0. Sunday did not fair much better as the L6s lost 3-1 to East Kilbride 2s, despite Layli Phillips’ goal. The L6s are 8th in Women’s West District Division Three.