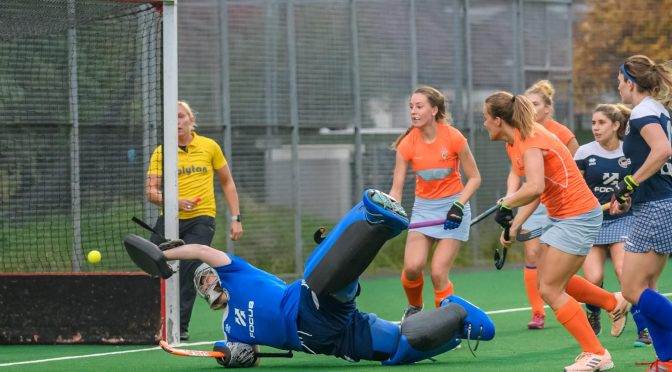 Clydesdale Western breathed new life back into their bid to be top of Women’s National Division One after seeing off fellow league rivals, Grove Menzieshill at Titwood on Saturday.

In what has been an open start to WNL 1, both teams produced a cagey first half.  Goalkeepers on either team were called into action on a couple of occasions to keep the score goalless at half time.

But it was the home side who broke the deadlock at the start of the second half when Emma McGregor converted to score her fifth goal of the season.  ‘Dale Western doubled their lead when Heather Howie tapped in a cutback from the baseline.  Grove, however, pulled a goal back with over five minutes remaining when a shot in the circle found its way in via an inadvertent deflection, leaving ‘keeper Jessica Buchanan with no chance.

But the L1s sealed the win just before the final whistle.  Ali Eadie’s enterprising run through the pitch played in forward, Lexi Sabatelli who in turn broke into the ‘D’ and send a reverse stick shot past the Menzieshill ‘keeper to seal the three points.

The result means Clydesdale Western are up to 4th in WNL 1, a point off top spot.

Clydesdale Men’s 1s were knocked off top spot of Men’s National Division One and suffered their first defeat of the season in the process as youngster Cammy Golden led his Grove Menzieshill side to a comprehensive win at Titwood on Saturday.

The M1s were top of Men’s National Division One before the match, whilst Menzieshill were 100% from their league matches.  The away side marked their arrival into the match, scoring a matter of minutes into the beginning.  Golden’s run down the baseline saw his shot cannon off the post which unfortunately deflected back off ‘Dale ‘keeper, Sean Mahoney and into the goal.

From then on, Menzieshill had the better of possession in the first half, but both goalkeepers were not significantly troubled.  In the second half, it started much the same as how the first half went, with the ‘Hill doubling their lead five minutes in.  Golden’s reverse stick shot fizzed past Mahoney and in to the roof of the net.  Ten minutes after, the away side were awarded a penalty flick which was converted by Albert Rowling.  Clydesdale on the other hand had opportunities through Ewan Fraser, David Clark and Euan Lindsay but all missed out on getting the home side a goal back.

Menzieshill then had enough time to add a fourth before the final whistle, when Golden completed his hattrick, tapping in a move down the ‘Dale baseline for 4-0.  The result sees Clydesdale Men’s 1s drop down to third, two points off top spot and having played a game or two more than the opponents above them.

In the rest of the games taking place over the weekend, it was a difficult week for the rest of our Men’s teams who all tasted defeat.  Perhaps the unluckiest team were the M2s, who are still searching for their first points of the season in Men’s Regional Division One.  This was despite a really good performance against an experienced Watsonians 2s, who added two second half goals to their first half goal lead.  The M2s got some reward for their efforts when David Sturgess converted a stunning team move, before David Henderson scored a drag flick in overtime.  A depleted M3s team improved on a 4-0 deficit at half time to pull a goal back through youngster, Ethan Robertson.  But that was how proceedings remained as the M3s lost 4-1.  The M4s lost 4-0 away to Kelburne 4s, whilst the M5s lost 5-1 at Uddingston 5s – Roddy Shaw scoring the M5s only goal.

The L2s scored a total of seventeen goals over two home games at the weekend to reignite their stuttering start to the league season.  The L2s won 10-1 on Saturday – Heather Lang continued her return to hockey with a four goal haul.  There were two each for Annabel Ballantyne and Rhona McGregor whilst Naomi Harkness and Ruth Moffat scored a goal each.  On Sunday, the L2s won 7-3 against Edinburgh University 3s.  Ballantyne scored another brace as did Lesley Cosh, and their was a goal each for Lang, Harkness and Martha Lawson.

Well done to our ladies teams this weekend.  Hard luck to our Men’s, but there are plenty of games left before indoor to have a strong finish to the first half of the season!