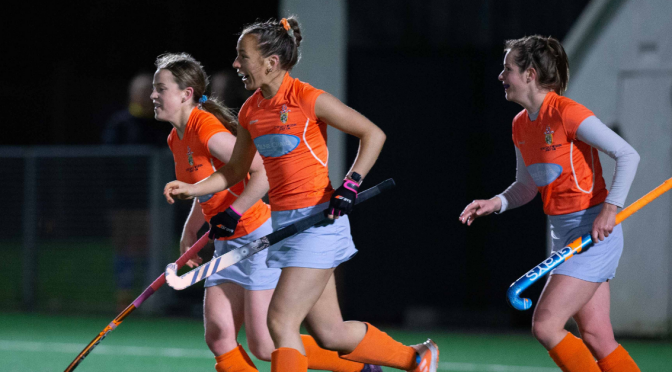 Clydesdale Western 1s scored an incredible total of 23 goals this weekend to secure big scoring wins in the Women’s Premiership and keep up their perfect start to the season.

The L1s followed up a 6-0 away win to Gordonians 1s on Saturday with a stunning 17-0 victory in Dundee against Grove Menzieshill 1s. Those results, coupled with scorelines around them sees ‘Dale Western second in the league table going into Thursday night’s game in hand at home to the league’s basement side Erskine Stewart’s Melville 1s. The margin of both wins also saw the Titwood side close the goal difference gap on their league rivals.

At Countesswells on Saturday, Clydesdale Western started on the front foot but were struggling to break down a stubborn and resilient Gordonians defence. When they did, the visitors were matched by some excellent saves from the Aberdeen side’s goalkeeper. But the L1s eventually broke the deadlock through Heather Lang before Fiona Semple added a second from a penalty corner shortly after. In the second half, Derek Forsyth’s side stepped up in the goalscoring front and added four more through Lang for a second time, Annabel Ballantyne, skipper Frances Lonergan and Jenny Eadie.

Sunday at Dawson Park against Grove Menzieshill produced nearly three times the amount of goals from the day before, all for Clydesdale Western. Lang kept up her fine form in front of goal by adding another four to her tally for the season. There were also trebles for Semple, Jenny Eadie and Holly Steiger. Bronwyn Shields grabbed a double whilst Ballantyne and Millie Steiger got one each. What may have went under the radar, mainly due to the attacking dominance that ‘Dale Western displayed over the weekend, was another two clean sheets for Forsyth’s team – their seventh from eight league games this season.

A draw with Uddingston on Saturday and a defeat to Grange on Sunday – despite almost producing a stirring comeback – means hopes of a top six finish in the Men’s Premiership before the split is out the hands of Clydesdale 1s.

‘Dale could only manage a 1-1 draw away to Uddingston on Saturday before succumbing to a 6-4 loss at home to Grange the following day. The M1s remain seventh in the league table and must now hope for a win against Hillhead on Saturday along with favourable results against their rivals also vying for a top six place before the league splits after eleven games played by each team.

Against Uddingston at Bothwell, the Titwood boys began the contest well and opened the scoring midway through the second quarter when captain Andrew Allan converted a short corner. More chances fell the way of the visitors, but it was Uddy who got the game’s second goal after half time. Despite a strong response from Clydesdale, the score remained the same meaning both sides had to settle for a share of the points.

Sunday at Titwood was no different to an extent. A strong start produced another Allan PC goal, but three defensive errors gave Grange a 3-1 lead by half time. Unmarked forwards on two separate occasions meant the Edinburgh side held an assumingly unassailable 5-1 lead early into the second half. But two corner conversions by Ben Cosgrove either side of an Allan penalty flick set up a grandstand finish. Sadly for the M1s, it was Grange who grabbed scrambled the ball over the goal-line to score the games tenth and final goal.

The M3s kept up their challenge of the league title in Men’s West District Division One with a 5-1 win away to Strathclyde University 2s. Colin Moulson scored a brace whilst there was a goal each for Colin Gambles, Lewis Gambles and Ali Bleach. The M5s also recorded the same scoreline, but this time at home to Hillhead 6s in Men’s West District Division Three. Derek Park got his name on the Clydesdale scoresheet with his first ever goal for the club. Donald Amour added two goals for the M5s and there was a goal each for Reuben Clark and Duncan Gambles.

The M2s lost out in their Men’s Regional Division contest away to Grange 2s. Adam Docherty scored early on, but the home side hit twice midway through the second half before scoring a third right on the final whistle.