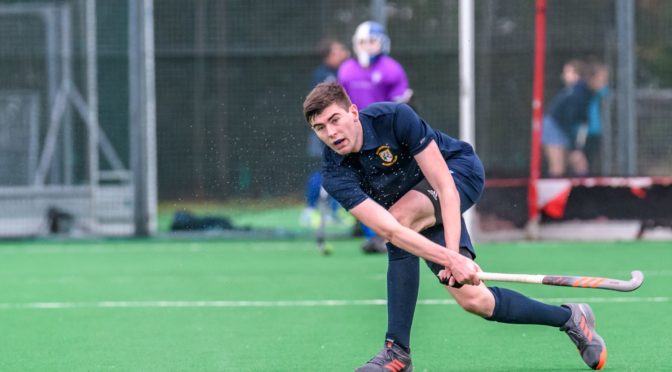 Clydesdale Men’s 1s lost a little ground in their bid to reach a top four spot in Men’s National Division One but took a valuable point at Dundee International Sports Centre against Grove Menzieshill 1s on Saturday.

Going into their first outdoor match of 2019, the M1s were goal difference behind Hillhead in fifth place of MNL 1.  And the last time ‘Dale and Menzieshill played, saw the Dundee side run out 4-0 winners at Titwood.

Going in to the game, the M1s were without Graham Dunlop, Ewan Fraser, Struan Walker And John Joe Lonergan in their side, whilst Menzieshill were notably missing Cameron Golden and Ben Cosgrove – who had recently represented Clydesdale for the indoor season.  The game itself was a more even contest than the previous meeting back in October.  The home side did take the lead, but defender Chris McFadden levelled the scores from a penalty corner.  Both sides pushed hard and had golden opportunities to win the game late on but neither were able to capitalise on these chances.

The result means Clydesdale remain fifth, but fall two points behind Hillhead due to their 4-0 win against Kelburne.  Clydesdale and Menzieshill contests in the league are over for another season, but the two sides will meet again in almost two weeks time in the Quarter Finals of the Scottish Cup at Titwood.

For the rest of the Men’s teams, it was three defeats from three, with the unluckiest team being arguably the M2s.  Despite the M2s taking a half time lead through a Neil Fulton penalty corner at Old Anniesland and then scoring an equaliser at 2-2 from a Blair Paul penalty corner, their opponents Hillhead 2s scored the winning goal via an overtime penalty corner to win 3-2.  It was somewhat unlucky given the valiant effort and performance the M2s had shown throughout the contest which still leaves them only two points clear of bottom place in Men’s Regional Division One.  The M3s missed out on the chance to go fourth in Men’s West District Division 1A after losing 2-0 at Garscube to Glasgow University 2s.  The M5s found their day even more difficult as they lost 7-0 to Helensburgh 2s at Hermitage Academy.  Despite the heavy loss, the M5s could take positive note in that half of the represented team were junior players, including three debutants.

Clydesdale Western 2s hopes of reviving their bid to be champions of Women’s Championship Division One continued as they closed the gap on second placed Uddingston 1s to just three points following their 6-0 win at Titwood against the South Lanarkshire side.  Naomi Harkness scored a hattrick, whilst there was a goal each from Anna Hoolaghan, Heather Lang and Ruth Moffett.  The L2s have a game in hand on both Uddingston and league leaders, Edinburgh University 2s – to which they trail the student side by nine points.  Coincidentally, the L3s took on Uni 2s at Peffermill on Saturday, but there was no shock scoreline as the L3s lost 2-0.  On Sunday, the L4s are up to fifth in Women’s West District Division One following their 3-1 away win against Glasgow University 3s – goals coming from Aaliyah Sandhu, Gill Green and Georgia Schmolke.  And like the M2s, the unluckiest team of the weekend for Clydesdale Western were arguably the L6s, who narrowly lost 1-0 to Dumfries 2s at Titwood in Women’s West District Division Three.