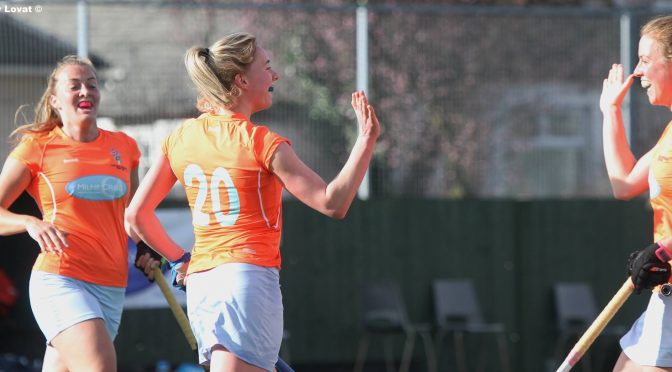 Clydesdale Men’s 1st XI finished off the first half of the season with a heavy defeat to league leaders Grange at Fettes College on Saturday.

With a host of regular 1st XI players unavailable including captain Patrick Lonergan, the M1s were already up against proceedings before the game started.  Clydesdale took the lead early with Ciaran Crawford’s scoring his 13th goal of the season.  But the joy was short lived as Grange dusted themselves down and delivered an emphatic goalscoring performance by putting seven into the Clydesdale goal and signalling their intent to be league champions of the Men’s National Division One league come the end of the season.  For ‘Dale, it was their fifth defeat in as many games, which sees them occupy 8th spot in the league, three points behind a safe 6th spot.

Lucy Lanigan’s opening goal was cancelled out by the home side and looked to be a game defining equaliser as they game was heading towards deadlock.  But Brown’s late goal gave ‘Dale Western a hard earned three points, giving them their third win in a row.  The result sees the L1s keep pace at the top end of the Women’s National Division One league table as they too head into the indoor season.  The girls are currently 3rd, four points behind league leaders Edinburgh University.

The M2s went down to a late Grange 3s winner, despite having been in the lead twice.  Goals from captain Adam Docherty, David Henderson and David Christie looked to have sent the M2s on course for another three points.  But Grange 3s rallied late on in the second half to win 4-3 and steal the points in an engrossing encounter.  The M2s are currently top of the Regional Division One table, but this could change by next weekend having played a game more than rival opponents. The L2s came from behind twice themselves to win late against Edinburgh University 3s at Titwood.  Despite Lesley Cosh cancelling out the visitors first goal, Uni 3s retook the lead in the second half.  But a Julie Lonergan penalty corner strike and a superb late Gill Green goal gave the L2s the win.  The result also meant the L2s kept their three point advantage at the top of the Championship Division One League table.  The M3s bounced back from their Dumfries defeat to beat GHK 2s 5-2 thanks to doubles from youngsters Ben Galloway and David Sturgess – ex 1st XI captain, Colin Moulson scored the other.  Goals from Helen Walker, Helen McNaught (two each), captain Ali Cox and Alice Sherwood gave the L3s a 6-0 win against CALA Edinburgh 2s at Meggetland.  The M4s are currently 11 points clear at the top of the West District Men’s Division 3 table after their 4-2 win over Western Wildcats 4s.  The goals coming from U16 players Ben Mitchell, Christopher Richmond and two for Ethan Robertson.  The M5s grabbed their second win of the season as Jack Nairn and captain Iain Flynn scored in a 2-1 victory over East Kilbride 2s.  The L4s picked up their second 1-0 win in as many games through Wendy Justice’s well taken penalty flick.  The L5s lost 3-2 in a well played encounter against GHK 3s – Jessica Kelly and Lauren Halley were the L5s scorers.  The L6s had two games over the weekend, but suffered defeat in both.  A 5-0 defeat to Ferguslie on the Saturday was followed up a brutal 14-1 loss away to Uddingston 2s – Kate Rennie scoring the merest of consolations.

Well done to all eleven teams in action as we now begin to head into the indoor season.