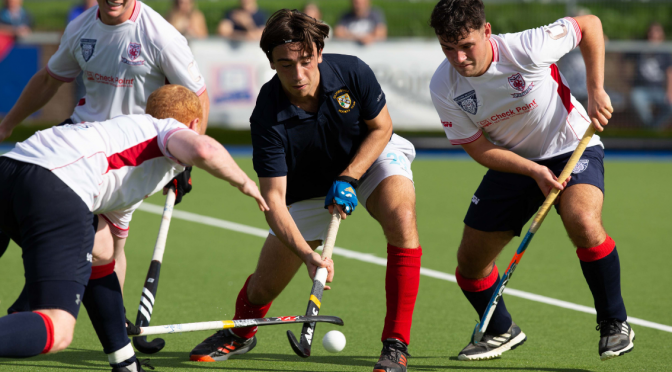 Clydesdale 1s staged a stirring fightback late on to come from three goals down and take a point against Men’s Premiership table toppers Western Wildcats 1s at Auchenhowie on Saturday.

The M1s remain without a win since the restart to the outdoor season, but the manner of Saturday’s draw may arguably feel like a win for Head Coach Ciaran Crawford and his players given their comeback draw was against a Western Wildcats side who have been near flawless since the start of the domestic season. The Titwood boys were 3-0 down by half time courtesy of a clinical treble from Western forward Andrew McConnell. But Alastair Douglas’ reverse stick shot just before the end of the third quarter was the catalyst for a fourth quarter battle which culminated with David Nairn scoring twice – once from the penalty spot and the other literally seconds before the full time whistle. The draw keeps Clydesdale sixth in the top half split of the Men’s Premiership, but close the gap on Dunfermline Carnegie in fifth to one point.

Going into the game, Crawford was able to recall skipper Andrew Allan whilst Jack Nairn kept his place following his impressive debut against Grange 1s the previous Saturday. The first half itself started with the home side on the front foot, so it was no surprise when McConnell converted twice in the space of three first quarter minutes, both from penalty corners. The Scotland forward then completed his hat-trick as his side quickly took advantage of a temporarily displaced ‘Dale defence following the award of a free hit. For all of the endeavour put in by the away side, chances were at a premium admittedly due to unforced errors and incorrect decision making at key moments.

However, a solid fifteen second half minutes from Clydesdale was deservedly rewarded. Collection of possession on the halfway line lead to a circle penetration and what appeared to be an incorrect choice in pass resulted in Douglas gathering the ball before firing a reverse stick shot high past Wildcats goalkeeper Gavin Sommerville. With the deficit at two goals, the odds were still in favour of the home side. But with seven minutes to go Jack McKenzie’s driving run was illegally halted in the circle, which meant the award of a penalty flick that was fiercely put away by David Nairn. Crawford took a huge gamble to take off his goalkeeper – against the league’s most potent attack this season no less – in favour of an eleventh outfield player. And that gamble was rewarded as with seconds remaining on the clock, David Nairn levelled the score, applying the final touch to Gregor Hirst’s drag pass into the circle to complete a fantastic comeback.

Clydesdale Western 2s booked a place in the Semi Finals of the Women’s Scottish Plate after a penalty flicks win over Women’s National League leaders Inverleith 1s at Titwood on Sunday.

Louise Redpath’s equaliser with less than ten minutes to play was enough to send the Quarter Final tie to spot flicks. Redpath along with Georgia Coyle, Lucy Arnold and captain Rhona McGregor all converted from their respective penalty flicks. But it was goalkeeper Iona Colquhoun’s heroics with two penalty flick saves that played a huge part in sending Donald Amour’s side into the last four of the Women’s Plate at the expense of an Inverleith side who are currently unbeaten in the Women’s National League.

The Edinburgh side were in front midway through the second quarter with a strong backhand shot, giving them a lead that was arguably deserved on their part. The L2s tried in vain to respond with chances coming from McGregor and Elise Fitzgerald, but both were unable to level the score before the break. Hannah MacDonald then went close after half time from a short corner, whilst Inverleith did their best to double their tally but were thwarted by strong defensive tackles by both Coyle and Arnold.

Redpath then struck a penalty corner towards the end of the tie to draw ‘Dale Western 2s level. And that was enough to bring in the drama of penalty flicks, with the home side taking full advantage of Colquhoun’s double save at the beginning of the shootout by scoring all four of their own flicks to seal a brilliant win.

Both the M2s and M3s were sadly knocked out at the Quarter Final stage of their respective cup competitions on Sunday.

The M2s, in the Men’s Scottish District Cup, were 2-0 up early away to Edinburgh University 2s, who currently hold top spot in the Men’s Regional Division. But the student side responded emphatically to find themselves 3-2 up before M2s goalkeeper Gordon Clark was forced off due to a head injury. The home side then added a fourth into an unattended goal, but Stuart Banford’s side showed a passionate reply with a goal of their own in the hope of rallying a comeback akin to the M1s on Saturday. Sadly, an equaliser did not materialise and with Clark’s unfortunate absence, Uni 2s added a game ending fifth goal to seal their place in the Semi Final. Goals for the M2s came from Neil Morton Lloyd, Jamie Green and Leo Howes.

Meanwhile, the M3s were at home to Watsonians 3s in the Men’s Scottish Reserve Cup at Titwood. The Edinburgh side were 2-0 up by half time, but Craig Bradley’s side did have chances through Lewis Gambles, Colin Moulson and Foster Harrowell. Ali Bleach also had a couple of corner chances in the second half, but Watsons’ added another two goals in the second half to run out deserved winners with a 4-0 scoreline.

The M2s and M3s were involved in league action the prior to Sunday’s cup ties. The M2s had to come from 2-0 down to win 4-2 away to Grange 3s at Fettes College in the Men’s Regional League. Morton Lloyd, Harrowell were on target again, as to was Tom Spence – who registered his first ever Clydesdale goal – and Fraser Cowle. The M3s, in Men’s West District Division One, had to settle for a point following a 1-1 draw at Titwood against Rottenrow 1s – Ronnie Barr was the scorer for the home side.

James Barr scored a stunning goal on debut for Clydesdale, but it could not stop the M4s losing 3-1 at home to Giffnock 1s in Men’s West District Division Two. The M5s were left wondering what may have been after surrendering a two-goal lead in the final five minutes away to Hillhead 6s. Iain Flynn did give the M5s side an initial lead, before Aayan Baig and Harris Baber also found the scoresheet in a 3-3 draw.

L3s captain Alice Sherwood scored her first goal since her lengthy absence from a serious knee injury against George Heriots FP 1s in Division B of the Women’s Championship at Goldenacre. Alex Campbell was also on target in the L3s 2-2 draw, taking them up to four points for the season. Like the M2s and M3s, the L2s were also in league action on Saturday, drawing 1-1 to Glasgow University 2s at Hutchesons’ Grammar School in Division A of the Women’s Championship. Redpath scored from a corner just before half time, but the west end student side levelled four minutes from time.

In Women’s West District Division One, the L4s were indebted to a superb piece of hockey by Maisie Simmers Clark, who set up Melanie Ovens to score in a 1-0 win over Glasgow University’s 3rd XI side at Craigholme School. One goal was also all that separated Kelburne 3s and the L5s at Glasgow Green in Women’s West District Division Two, with the Paisley side, unfortunately, taking all three points in a late Saturday passback.