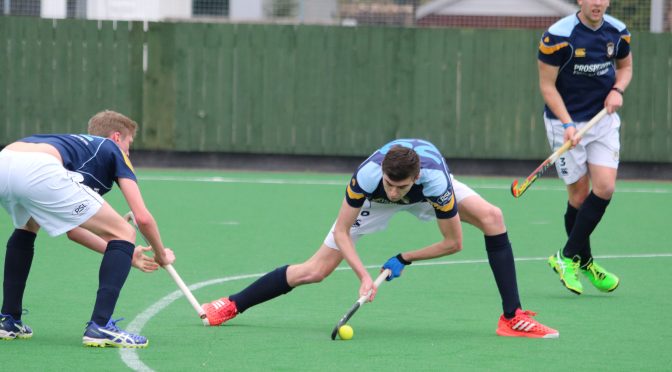 Clydesdale Men’s 1s recent winning run in Men’s National Division one was ended by Grove Menzieshill at Titwood on Saturday.

Despite taking the lead through Danny Cain after good build up play from Euan Lindsay, Grove Menzieshill raised their game to turn the game round in their favour.  And despite an equaliser from the spot from Chris McFadden, the Taysiders scored another two goals, which were left unanswered by ‘Dale as the visitors took all three points.  The result keeps Clydesdale 5th in the league table.

Clydesdale Western 1s came from behind to beat league rivals Grove Menzieshill at Titwood on Saturday.

After a goalless first half, the home side fell behind early in the second half, but hit back through Emma McGregor in less than a minute after the Grove opener.  Despite a number of impressive saves from the visitors ‘keeper, the girls were not to be denied as Jen Eadie stuck a reverse stick winner to take the points for the L1s.  The result keeps Clydesdale Western 2nd in Women’s National Division One, five points off top of the table Edinburgh University.

In the rest of Saturday’s games, the L2s kept up the pace at the top of the Women’s Championship Division One after a narrow 4-3 win over Haddington 1s – Christy MacKinnon scoring a hat-trick, whilst Tia Mansbridge got one.  The M2s hopes of winning Men’s Regional Division One are all but over after a 4-0 loss to Hillhead 2s.  Despite an encouraging performance, the M2s could not find a way past Hillhead ‘keeper Jamie Frail, who was in fine form making several crucial saves including one from a first half penalty flick.  The M2s sadly had a 15 second half minute capitulation in which Hillhead scored all four.  The L4s, L5s and L6s concluded their seasons, all with wins.  There were 4-0 wins for the L4s – against Rottenrow 1s with goals from Wendy Justice, Kate Rennie, Maria Mone and Sarah Kelly – and for the L5s against Hillhead 4s – through goals from Jessica Kelly, Katrina Meikle, Catherine Clark and Lucy Anderson.  The L4s finished their season 4th in Women’s West District Division One whilst the L5s, who had their promotion to Division Two confirmed last week, finished 2nd in Division Three.  The L6s, who also survived relegation from Division Three last week, won 3-0 at home to Ayr 2s thanks to goals from Rosalind Murray (two) and Anais Bonner.

Clydesdale 1s Scottish Cup hopes were ended at the Semi-Final stage, losing on running penalties to Grange after drawing 2-2 in a pulsating encounter.

In a tense game throughout, the away side took the lead throught a rebound after a shot was initially saved well by ‘Dale ‘keeper Gordon Clark.  Clydesdale hit back a minute before half time after excellent work down the right baseline from David Nairn saw him impressively flick in to the Grange net.  However, straight after the restart, older brother James Nairn representing the away side skipped through a few Clydesdale challenges before hitting a fierce reverse stick shot to restore Grange’s lead.  Clydesdale equalised 25 minutes into the second half through Andrew Allan’s penalty corner drag flick.  That was how it remained as the game went into running penalties.  Grange scored all three of their attempts, whilst Clydesdale sadly missed three out of four – Danny Cain scoring their only attempt as the home side missed out on a place in the Scottish Cup Final.

Clydesdale Western sealed a place in the Women’s Scottish Plate Final after comfortably beating Grange EL at Titwood on Sunday.

‘Dale Western 1s will face Edinburgh University 2s at Glasgow Green on Sunday 6th May – this was after goals from Susie Gillman, Anna Hoolaghan, Zara Mason and Lexi Sabatelli gave the girls the Semi-Final win.

Well done to all of our teams again for their efforts, especially to the L4s, L5s and L6s who concluded their seasons!