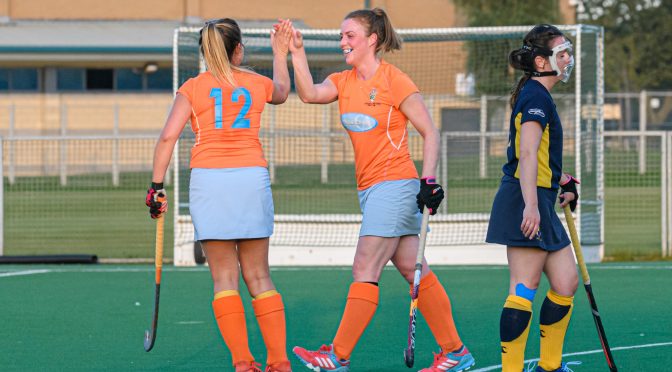 Clydesdale Men’s 1s had to settle for a point in the opening fixture of the Men’s Premiership season after fierce rivals Western Wildcats clawed back a two goal deficit at a sunny Titwood on Saturday afternoon.

A superb team goal finished by David Clark and a Euan Lindsay deflection gave the M1s a 2-0 lead.  But the fourth quarter saw Wildcats forwards Rob Harwood and Andrew McConnell square proceedings which was the cue for a barnstorming finish with chances, unforced errors, debatable decisions and cards aplenty for both teams – but ultimately there was no third goal as both sides finished honours even.

The first half was fairly even with both teams settling early and creating a tempo that maintained throughout the course of the game.  Quite impressive given the near six month break from competitive hockey.  From a defensive 16 was when the M1s broke the deadlock with a slick passage of play five minutes before the end of quarter one.  Andrew Allan played in captain Gordon Amour before moving the ball on Antony Small past the halfway line.  Small released Graham Dunlop with an upright reverse pass, who then fed on to Lindsay.  Lindsay’s first time pass saw Clark deflect on his reverse stick off the near post.

Quarter two remained fairly equal despite the 1-0 scoreline, with Clydesdale maintaining a solid defensive shape.  Western’s best chances came through McConnell at two corners, one of which was saved well by ‘Dale goalkeeper Sean Mahoney.  After half time, the M1s doubled their lead when Amour reversed a ball in for Lindsay to deflect.

The third quarter took on a familiar pattern to the preceding two – Clydesdale were solid in defence, but apart from the goals were not quite at their inspiring best going forward, whilst Wildcats were putting in more effort to force a goal back but admittedly were struggling to create a clear cut chance, particularly in open play.  This was until the end of the quarter which saw them have a goal disallowed.

It was the fourth quarter that defined the game.  Thirty seconds in, an error in defence from Clydesdale saw Harwood pick up possession on the penalty spot and round Mahoney to slot in.  The M1s had corner opportunities to retain their two goal lead, but most of the corners were bravely and quickly ran down by Wildcats defence. One corner did lead to a chance for Lucas as his shot appeared to hit a defender close to the goal-line. The umpire deemed it to be a penalty corner, rather than a flick – citing the away side’s goalkeeper was behind the defender’s line. Not long after, Lucas was involved again in a passage of play that led to the away side’s equaliser. Lucas had appeared to play the ball off a Wildcats foot midway inside his own half, but no foul was given. The away side quickly picked up possession before winning a corner that was converted low by McConnell.

Western were perhaps unfortunate to have another goal chopped off not long after their equaliser, as both sides looked dangerous on the break. Clydesdale admittedly had a period of disarray defensively, leaving them susceptible to conceding a third. But they eventually sorted themselves out, even with a range of cards being brandished in quick succession, leaving the crowd to work out how many players each team had on the pitch. At the end, Clydesdale’s best chance to score a third goal, and likely winner, would come from forward Struan Walker who was in a one-on-one situation with a Western defender. But surprisingly, Walker was unsuccessful in beating the defender – a situation he so often relishes – as the game eventually petered out to a close.

Ali Howie marked her first competitive game in 18 months with a goal as Clydesdale Western 1s got their season off and running with a comfortable home win against Hillhead in a late Saturday passback.

Karin Belch’s near post finish was cancelled out by Hillhead in the second quarter, but captain Frances Lonergan and Howie struck a penalty corner each before half time. Holly Steiger – also on a return from Aberdeen – deflected in before Lexi Sabatelli reversed in to complete the scoring and wrap up a professional performance for Clydesdale Western.

Jen Eadie was a notable absentee through injury but other than that, the L1s were at full strength. It was looking as though Hillhead were proving to be a stubborn force defensively, completing the first quarter level. But quarter two was when Clydesdale Western took the lead – Belch reversing in at a narrow near post gap to give the home side a deserved lead. Hillhead responded from a breakaway, after a save from Jessica Buchanan was rebounded in from close range. The L1s shook off the disappointment of conceding to quickly score two penalty corners in quick succession. Both were struck low by Lonergan and Howie to double their team’s lead going in at half time.

The third quarter saw a half court set up from Hillhead, as ‘Dale Western remained patient, keeping possession and waiting for the opportune moment to score a fourth – and effectively match winning – goal. And it would come in the final quarter from Holly Steiger, who showed great skill to deflect on her reverse from a cross field sweep, right of the final 25 from Anna Hoolaghan.

Sabatelli was fairly persistent in her attempts to score a goal throughout the game and was not to be disappointed after finding space at the top of the circle before reversing in a fierce low shot to finish the scoring for the L1s.

Four of our Clydesdale & Clydesdale Western teams collected wins over the weekend, with three of those being opening day wins in their respective league campaigns.

The L2s and L3s got their Women’s Championship Division One seasons off to winning starts. Lucy Bliss scored a debut goal for the L2s in a 3-0 win away to newly promoted Hillhead 2s – Hannah MacDonald and Nicky Wilson were also on the scoresheet. Two from Helen Walker and a goal each from Annie Lonergan and Lizzie Sturrock gave the L3s a 4-1 away win against Grove Menzieshill 2s. The L5s and L6s lost 2-0 to East Kilbride 1s and Hillhead 4s respectively. The following day saw the L4s and L5s take to the field in the First Round of the Women’s West District Cup. A single from Anna Winter and doubles from Ann Menzies and Cath Stirling gave the L4s a 5-0 win over Kelburne 3s. The L5s lost 3-0 to Glasgow Accies 2s and will now enter the Women’s West District Plate competition.

In the Men’s games, there were seven different goalscorers in the M2s stunning 7-2 win away to Kelburne 2s. Blair Paul, Neil Fulton, Adam Docherty – who also featured for the first time in nearly 18 months – and Fraser Hirst gave the M2s a 4-0 lead at the break. Scott Lindsay made it five before the home side hit back with two goals of their own. Lindsay then set up Colin Moulson for number six, before Moulson set up Jeetinder Berman to restore the M2s five goal lead and seal three points in the opening fixtures of Men’s Regional Division One. The M4s were seen off 2-0 by Kelburne 5s, but Frank Hirst scored a corner to give the M5s a 1-1 draw against Kelburne 6s.