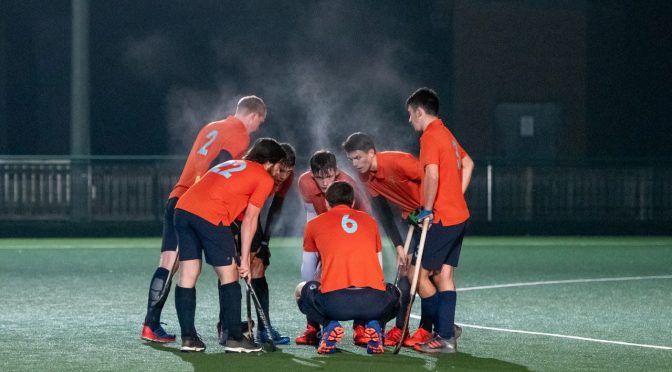 Clydesdale Western 1st XI missed out on the opportunity to stretch their lead at the top of the Women’s Premiership after falling to a narrow defeat to Watsonians at Peffermill that sees the Edinburgh side move level on points.

A goal from Heather Tait in the second quarter was enough to give Watsonians all three points and inflict a second league defeat on Clydesdale Western.  The L1s still remain top of the Women’s Premiership – via goal difference – despite Watsonians and Dundee Wanderers drawing level on points following respective wins in the league.

In a game that saw returns for Ali Howie and Bronwyn Shields and a first L1s appearance of the season for Emma McGregor, Derek Forsyth’s side started well, creating goalscoring chances that went unconverted.  In the second quarter, it was the home side that took the lead as a fast counter attack led to Tait scoring.

The final two quarters were not too dissimilar.  Clydesdale Western applied pressure to win penalty corners and create scoring chances.  But a strong Watsonians defence saw out a strong L1s attacking force, which before Saturday had been scoring at will, to take the win.

Clydesdale Men’s 1s failed to take advantage in the top four Play-Off race in the Men’s Premiership after succumbing to defeat against Uddingston at Bothwell Castle Policies on Saturday.

Having won three league games on the spin, Ciaran Crawford’s side were fourth heading into their contest with Uddy, despite having played a game extra than nearest rivals Edinburgh University.  Clydesdale, however, were missing eight players – most notably captain Gordon Amour and Graham Dunlop.

It was a decent start by the Titwood boys, but their play which created chances were missed before Uddingston took the lead.  A crashed ball into the circle saw a forward evade his marker to deflect in.  Struan Walker levelled proceedings not long after, reversing in low from a short corner.

The home side regained the lead with a slick passage of play that found a forward in a one on one before slotting past ‘Dale goalkeeper Sean Mahoney.  The penultimate quarter was dominated by the South Lanarkshire side, putting ‘Dale on the back foot to score two more goals to take the game further away from their opponents.  To make matters worse for Crawford, an injury to Mahoney meant his side played the final quarter with eleven outfield.

Despite having a goalkeeper off, the away side held possession well to create plenty of chances.  But those chances were crucially missed and a loss of possession right at the end led to Uddingston rolling in a fifth goal.  The result sees Clydesdale drop to fifth on 13 points, with Uni replacing them following their 4-4 draw away to Kelburne.  Uddingston remain sixth, but close the gap between themselves and fourth place.

Despite two postponements, there were five wins for our Clydesdale & Clydesdale Western teams on Saturday.

The L2s were the most convincing winners, as doubles from Sarah Lonergan and Rhona McGregor gave their side a 6-0 win at home to George Heriots FP 1s.  Louise Redpath and Lucy Arnold also scored as the L2s continue to rise in Women’s Championship Division One.  The L3s remain second in the same league following a 1-0 win away to Hillhead 2s thanks to a Claire MacDonald goal.

Two goals from the returning Michael Cockburn saw the M2s win a ding-dong affair in a late passback at home to Inverleith 2s in Men’s Regional Division One.  The M2s found themselves all over the place, conceding less than a minute in before going a two down just after five minutes.  Adam Docherty’s penalty flick and Cockburn’s first drew the home side level ten minutes later, but the Edinburgh side retook shortly after the M2s equaliser.  Alex Ingram then shuffled past no more than five defenders in the penalty circle before crashing in a sublime third goal just before half time.  Colin Moulson’s deft near post finish in the second half gave Stuart Banford’s side the lead for the first time in the game. But the lead did not last long as the home side conceded a flick to be pegged back.  Cockburn had the final say, however, running half the length of the pitch uncontested to slam home.

Despite taking a 2-0 lead, the L6s went down 6-2 to Uddingston 3s in Women’s West District Division Three.  Skye Moulson was quickest to a rebound to open the scoring, before Molly McFadzean’s overhead smash doubled the L6s lead. But Uddingston’s experience showed as they hit back with six unanswered goals to seal victory.

Frozen pitches saw the postponements of both the M4s and L5s league games.

Clydesdale Western’s hopes of Scottish Cup glory ended for another season as the 2nd XI bowed out at the Second Round following a narrow defeat to Stirling University 1s at Gannochy Sports Centre.

The L2s, who regularly face Stirling Uni in Women’s Championship Division One, conceded a goal midway through the first half. There was an almost instant respone from the away side following the award of a penalty flick, but Stirling Uni’s goalkeeper saved from defender Louise Redpath.

The second period saw the L2s step up in shape, and found themselves almost buried inside the home side’s final 25. But a series of chances were crucially missed as the home side held on to seal a passage into the next round of the Scottish Cup.

Clydesdale Western 1s got their Scottish Plate campaign off to a routine win against Edinburgh University’s 2nd XI at Peffermill on Sunday.

The L1s bounced back from defeat 24 hours before as Jen Eadie and a first ever 1st XI goal for Anna Hoolaghan and Sarah Lonergan gave their side a 3-0 away win against Uni 2s.

Hoolaghan got the scoring started quickly after converting from close range following good play down the left hand channel. A similar passage of play followed for ‘Dale Western’s second goal, which saw Lonergan pounce quickest to a rebound off an initially saved Anna Logan shot. Eadie made it three when exchanged passes with Bronywn Shields led to the former attempting a pass in the circle that was unintentionally converted by a home side defender.

In the second period, it was more of the same for the visitors, who had the majority of possession. But for the chances created, including penalty corners, none were converted as the first half scoreline remained the same to seal a place in the Second Round of the Women’s Scottish Plate.

Unfortunately, five Cup and Plate games were called off on Sunday due to frozen and unplayable pitches.

These fixtures will be replayed at a date to be confirmed later in the season.