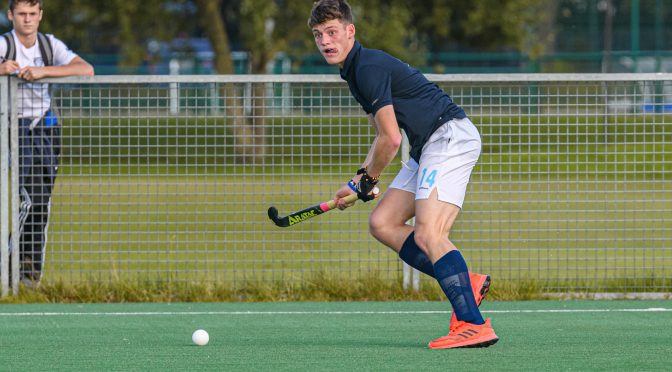 Clydesdale Men’s 1s recorded their first win of the Men’s Premiership season with a thumping victory over Dundee Wanderers at Titwood.

Having drawn from a winning position against Western Wildcats 1s the previous weekend, Head Coach Ciaran Crawford and his squad were keen to put things right with the visit of Wanderers – who incidentally were playing their first game of the season.

And Clydesdale duly delivered with an emphatic second half goalscoring display, adding a further five goals to a 2-0 half time scoreline. The main catalysts being forward Struan Walker and defender Andrew Allan, who both claimed hat-tricks on the day. There was also a first Clydesdale goal for new arrival Ali Douglas to cap off a great days work.

Walker started the scoring with a reverse stick shot, before Allan added a drag flicked penalty corner to give the M1s a comfortable lead at the break. Walker and Allan then doubled their respective tallies after halftime before Douglas deflected in an Antony Small swept pass for goal number five. Allan completed his hat-trick, again, with a drag flick before selflessly setting up Walker for his treble from another penalty corner. ‘Dale completed the game with a clean sheet to bargain, capping off an energetic and sound performance to give them four points from a possible six in the 2019-20 campaign.

Clydesdale Western 1s kept up their fine start to the Women’s Premiership season with a comfortable win at newly promoted Gordonians 1s.

Having seen off Hillhead with a fair amount of ease last Saturday, the L1s had the potentially unknown against a new Women’s Premiership side in Gordonians 1s – who play their hockey in Aberdeen.

But ‘Dale Western shook off any long travel concerns and mystery surrounding the opposition with a strong display, registering six goals – four of which came in the first quarter – and leaving the field with a clean sheet too. There were two goals each for forwards Heather Lang and Lexi Sabatelli, whilst Naomi Harkness and Laura Paul also added to the L1s scoreline.

The 6-0 win, alongside the opening day win against Hillhead, sets Clydesdale Western up nicely for the visit of Play-Off champions Western Wildcats for this coming Saturday.

Both sides went in to the game having won their opening games of the season the weekend before. But the L3s scored an early goal, a Helen Walker short corner being inadvertently deflected in. The L2s pushed hard for an equaliser for the majority of the game, but the L3s experience showed as they held firm, whilst also having chances of their own to further stretch their lead.

The result sees the L3s make it two wins from two, whilst the L2s – who finished as runners up to Edinburgh University 2s last season – will be aiming to bounce back from this early setback to their season.

Clydesdale Men’s 2nd XI rallied back from a two goal deficit to take a share of the points against an experienced Watsonians 2s side at Titwood in Men’s Regional Division One.

Having claimed a big win against Kelburne seven days before, the M2s started well and took a deserved lead when David Henderson reversed in from close range. But errors in defence and a clinical Watsonians 2s forward line, saw the visitors score three unanswered goals. But just before the half time whistle, Adam Docherty collected a loose ball in front of goal before squaring for Ian King to tap in.

Docherty then scored the M2s third ten minutes in to the second half with a composed finish – doubling his tally for the season – which was the cue for an immensely open encounter. Both sides were guilty of unforced errors and missing guilt edged chances, but ultimately neither could score the seventh goal of the game – arguably the fairest outcome as both teams maintained their unbeaten starts to the league season.