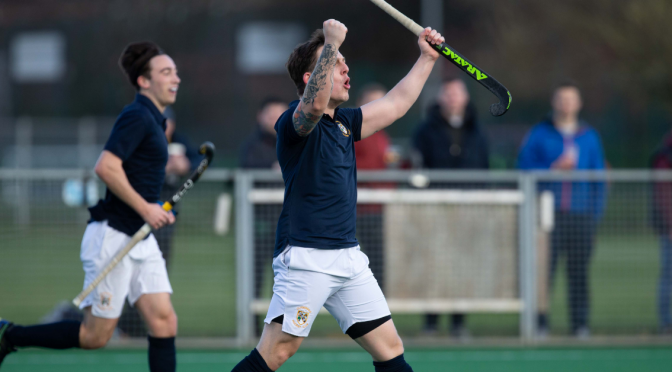 Clydesdale 1s registered their first win of 2022 with a pulsating performance in the Men’s Premiership against Edinburgh University 1s on Saturday at Titwood.

A 6-2 win courtesy of doubles from skipper Andrew Allan and Euan Anderson, which were added to a first half lead supplied by David Nairn and Jack McKenzie, have helped send Ciaran Crawford’s men up to fifth in the league table.

Going into the game, Crawford welcomed back Sam Hayes and Ethan Robertson to a 17-man squad that was without the services of Alex Lihou and Sammy Kasto from the previous weekend at Western Wildcats. The game itself saw Uni start off in the ascendency and created a couple of minor openings. But the home side eventually got to grips with the game and were awarded an early first quarter penalty flick for an illegal stop from a goal bound shot. Frustratingly, David Nairn’s flick was saved, but the Scotland U21 man redeemed himself in the second quarter by sending a second penalty flick into the top corner.

One become two moments later when Ben Wilson’s slapped pass into the circle was deflected high into the roof of the net by McKenzie. The home side were on the front foot in the second half and in the space of ten third quarter minutes, Allan converted two penalty corners. But the student side responded almost immediately with two quick fire goals of their own. Uni’s first goal was in the form of a penalty corner, whilst the second saw possession gained back from ‘Dale culminating with a forward on the baseline sweeping in a reverse stick shot past Calum Douglas.

With just over five minutes remaining, the visitors made the tactical gamble to pull their goalkeeper off in favour of an eleventh outfield player. But the plan had an adverse effect as within minutes of the change, Anderson swept twice into an empty goal to cap off a superb result and performance from the Titwood boys.

Clydesdale Western 1s fell victim to a last gasp winner by Watsonians 1s on Saturday at Tipperlinn in a result that has now opened up a three-horse title race in the Women’s Premiership – but bounced back on Wednesday evening with a narrow win away to Hillhead 1s that has sealed a place in the Semi Finals of the Women’s Scottish Cup.

Against Watsonians on Saturday, the L1s were less than a minute away from leaving Tipperlinn with a point thanks to goals from Emma Murray and debutant Rosie Tudor before their late concession in the final minute. Derek Forsyth’s side drop to down to second behind Watson’s, but the Titwood girls still hold a game in hand – albeit against fellow league challengers Edinburgh University 1s. On Wednesday night, a solitary goal from Karin Belch in the second half sent ‘Dale Western into the Women’s Scottish Cup Semi Finals at the expense of Hillhead.

Saturday’s contest started in typically battling fashion, with both teams exchanging chances in what were clear intentions to attack in order to win. It was the Titwood girls who opened the scoring first when good build up down the right hand side ended with Fiona Semple’s pass setting up Murray to lift a shot over the home side’s goalkeeper. The Edinburgh side hit back moments later when a firm shot into the corner left goalkeeper Cara McAllister with no chance. In the third quarter, Watson’s took the lead finishing off a quick breakaway. But Forsyth’s side then ramped up the pressure in a bid to force an equaliser, which was rewarded when Tudor reacted quickest to a loose airborne ball in the circle to cap off a solid debut. Sadly, it was not enough for the L1s who succumbed right at the death to a late Watsonians winner that takes the latter to the top of the Women’s Premiership.

Clydesdale Western did recover from Saturday’s loss with a narrow win at the Quarter Final stage of the Women’s Scottish Cup away to Hillhead at Upper Windyedge. The Titwood girls were left largely frustrated by half time of the last-8 tie having been denied an opening goal from the large number of chances that they created.

But it was the second half when the Titwood girls finally broke their Jordanhill opponents stubborn resistance thanks to a strong finish from Karin Belch. From then on, the away side tried to score a second goal to kill off the tie, but with time dragging on, Hillhead pushed hard in a bid to force an equaliser. Georgia Coyle did eventually put the ball in the goal for ‘Dale Western, but the goal was sadly disallowed. Thankfully, it had no bearing on the final outcome of the match as Forsyth’s side saw out the lead till the end to seal a Semi Final spot in the Women’s Scottish Cup.

On Saturday, Clydesdale 2s sealed a top six split finish in the Men’s Regional Division, whilst Clydesdale Western 6s recorded their first win of the season.

The M2s won 4-0 at home to Dunfermline Carnegie 2s courtesy of a brace from Neil Morton Lloyd and single goals from Fraser Cowle and Adam Docherty. Stuart Banford’s side sit fifth after a round of games against all opposition, meaning they will now face the remainder of the top six sides in their final five games of the season. Meanwhile, at Hutchesons’ Grammar School (HGS), the L6s clinched a first win of the season in Women’s West District Division Three. Goals from Rachel Brewer and Poppy Ballantyne giving the L6s a 2-0 win over Dumfries 2s.

The M3s were the biggest winners of the day, winning 5-0 away to Ayr 1s in Men’s West District Division One. Spencer Cox was on the scoresheet twice, whilst Andrew Cox, Ronnie Barr and Mitchell Pritchard all contributed to the goalscoring cause.

Sadly, it was no luck for the M4s, L2s, L3s and L5s respectively. The M4s, in Men’s West District Division Two, lost 2-0 to Uddingston 4s in Titwood’s first passback of the day. The L2s suffered a difficult afternoon going down 6-0 at home to runaway league leaders of the Women’s Championship Edinburgh University 2s. The L3s in the B Division of the Women’s Championship lost 3-1 away to Hillhead 2s – Alex Campbell was on the scoresheet for ‘Dale Western 3s. And in Women’s West District Division Two, the L5s were seen off 5-0 by Stewarton Garnock 1s at HGS.