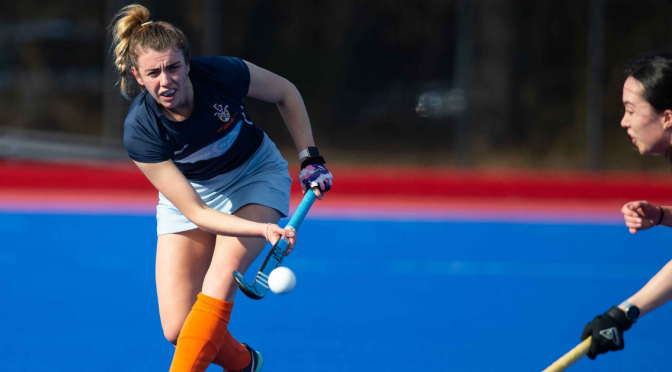 Clydesdale 1s produced one of their best goalscoring displays in recent years to complete a stunning 12-1 win over Dunfermline Carnegie 1s at a sunny Titwood.

Jack McKenzie scored the most with four goals, taking his recent scoring tally to seven goals in his last three games. Captain Andrew Allan and David Nairn also scored trebles whilst Andy McAllan and Gregor Hirst got a goal each to cap off a memorable day out for the M1s who now move to within one point of third place in the Men’s Premiership table. As well as this, the Titwood boys have now recorded their third win in as many games since the restart after the indoor season.

Going into the game, Ciaran Crawford welcomed back Allan as well as Sammy Kasto to a 17-man squad that had previously failed to beat Carnegie in their previous two outings. Both games finished with plenty of goals and the way Saturday’s contest started, it was perhaps heading for another goal fest. Allan’s early penalty corner conversion was cancelled out in under a minute when a Carnegie forward tapped home a loose ball from a Calum Douglas save. Moments later, the home side regained the lead when Nairn’s unchallenged charge down the right baseline was rewarded with a goal at the second time of asking after his initial shot was saved by away side’s goalkeeper.

From then on, it was all Clydesdale. Allan scored another corner before McKenzie scored his first with a tap in via Kasto’s saved hit at goal. In the second quarter, the Titwood boys added three more goals to their first quarter tally. McKenzie showed great skill to beat two defenders and slot in for the first of those three. Jamie Green then stole possession outside Carnegie’s circle and unselfishly teed up Nairn to put away a one-on-one chance and then McAllan got in on the act to tap in Ali Douglas’ pass to the back post.

The home side did not let up and scored an eighth with a flowing move that culminated with Douglas setting up Nairn for his hat-trick. McKenzie then scored his first hat-trick for the club when an effective press that won back possession in Carnegie’s circle finished with the speedy forward finding the top corner of the away side’s goal.

In the final quarter, Antony Small penetrating pass to McKenzie saw the latter reverse in for goal number ten before Dunfermline were reduced to ten men following a second yellow card. The red card was one of a number of cards dished out to both teams during the game. This included the Fife side’s goalkeeper which took place moments before Hirst scored a hit penalty corner for Clydesdale’s eleventh. Hirst then turned provider for Allan who found space in the circle to grab his hat-trick and finish the scoring off at twelve in what was a great watch for the home support.

Heather O’Brien’s goal after three Uni goals proved futile as the student side clinched all three points with a fourth goal in the final quarter to cap off a disappointing day at the office for Derek Forsyth’s side. The loss coupled with Watsonians 1s away win at Western Wildcats 1s means the Titwood girls now sit six points off top spot. The championship picture is far from over however as the L1s still hold a game in hand on Watsons and wins from their remaining five games would still guarantee title glory.

Going into the fixture with Edinburgh Uni, Forsyth still remained without Paz Medina San Martin and Emma McGregor. However, Karin Belch was available following last weekend’s absence. ‘Dale Western did start the contest well and created a few openings which were seen out by the home side. And the home side’s dogged defence was rewarded after a collection of possession ended with a Uni forward’s shot beating goalkeeper Cara McAllister for the game’s opening goal. The L1s kept persevering in their bid to forage an equaliser and again created more chances. Edinburgh Uni also had opportunities in the form of penalty corners, one of which was converted to double their lead.

In the second half, tiredness admittedly began to creep in due to the rising weather temperatures. With that, the L1s were unable to sustain periods of possession, which ultimately led to the student’s third goal as a reverse stick shot that looped in the air was eventually batted into ‘Dale Western’s goal. Forsyth’s side did get a goal back when O’Brien’s drive into the circle and subsequent sweep across goal took a deflection off a defender and found its way into Uni’s goal. Unfortunately for Clydesdale Western, it was not to be a goal that prompted a comeback akin to the M1s a few weeks back at Auchenhowie and if anything had an adverse effect as Uni scored their fourth via a well converted penalty corner.

The L6s secured a big win in Women’s West District Division Three following an excellent performance away to Strathclyde University 2s on Saturday.

Rachel Brewer’s side started the contest against the student side positively and were rewarded with an early opening goal for Laura Morton. Edie Simmers Clark then set up Anna Steele for 2-0 before the L6s increased their lead further in the second half. A foul on Simmers Clark resulted in the award of penalty flick, which was dispatched by Beth Gambles. Brewer then scored a drag flicked corner via the aid of a deflection before Anna Campbell composed herself to score a one-on-one. Despite Strathy scoring two goals after, the L6s held out for three well-earned points.

The M3s finished off their Men’s West District Division One season with a narrow 4-3 win over Kelburne 3s at Titwood. Colin Moulson was on the scoresheet twice and there was one goal each from Guy Hogan and Mitchell Pritchard.

The L2s and M2s were both pegged back to draws in their respective games. Away to Erskine Stewart’s Melville 2s, Rhona McGregor scored early on to give Donald Amour’s side a lead. ESM conjured up an equaliser for 1-1 before half time and that was how the scoreline remained all the way to the end. Whilst at Titwood, the M2s were on the receiving end of a Hillhead 2s fight back from two goals down. Stuart Banford’s side were in the ascendency in the opening quarter after Jack Nairn had set up both Neil Morton Lloyd and Adam Docherty for a goal each. But their Jordanhill opponents scored twice in the second quarter, which was enough to split the points.

Myles Macaulay’s goal for the M4s was sadly academic as Hillhead 4s came from behind to win 2-1 in Titwood’s first pass back of the day. Macaulay was the beneficiary of a wayward Hillhead pass to convert. But the away side scored goals in each half to leave the M4s empty handed after the Men’s West District Division Two clash.