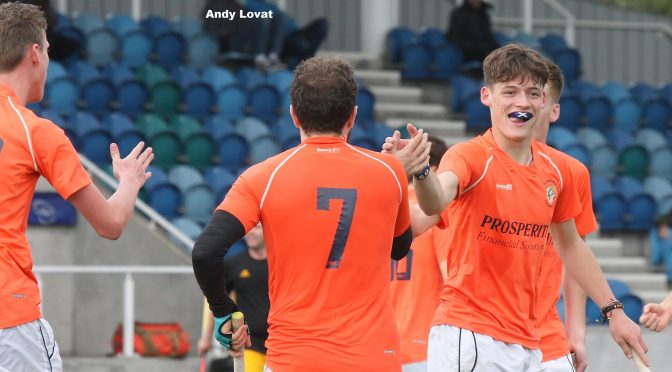 Clydesdale Men’s 1s made it three wins in a row in all competitions after Struan Walker’s double saw off Gordonians in Men’s National Division One.

Walker scored his sixth and seventh goals for the season when the U18 internationalist converted twice in the opening ten minutes.  ‘Dale and Gordonians battled hard to score the third goal of the game, but the 2-0 scoreline was how it remained right up to the final whistle.

Clydesdale move up to third in the league, a point behind top spot, whilst Gordonians remain bottom.

Clydesdale Western 1s unbeaten start to the season was ended when they lost their top of the table clash with Dundee Wanderers at Dalnacraig.

The L1s recovered from going 2-0 down at half time to the Taysiders when Scotland internationalists Lexi Sabatelli and Millie Steiger both found the target for the visitors in the final ten minutes.

But Wanderers found enough time to score a match winning fifth goal of the game to give them three points and remain top of Women’s National Division One.  Clydesdale Western drop to fourth and are now three points off top spot.

It was another difficult week for a few of our Clydesdale and Clydesdale Western teams over the weekend – with only one team out of the remaining nine picking up maximum points this weekend.  That was of the L4s who secured a 2-1 win against Glasgow Uni 3s at Titwood thanks to a goal each from Claire MacDonald and Georgia Schmolke.  The L3s almost won their game at Titwood but conceded two late goals in their Women’s Championship Division One match against current champions, Edinburgh University 2s.  A brace from Helen Walker and a goal from Sheena McKelvie looked to be giving the L3s a huge win.  But Uni 2s struck twice near the end as the game finished 3-3.  The M2s still remain without a point in Men’s Regional Division One despite a vastly improved performance in their 4-3 loss to Grove Menzieshill 2s at Kinross.  The M2s fought twice from going behind in the first half when Colin Moulson and David Sturgess finished off enterprising team moves.  Menzieshill hit twice in the second half, and despite Moulson converting from a penalty corner rebound, the M2s could not find the all important equaliser.  The L2s also came unstuck when they lost at newly promoted Uddingston 1s in Women’s Championship Division One.  Martha Lawson scored for the L2s but lost 2-1 after conceding from a late Uddy PC.  The M3s tough start to their season continued after they lost 4-1 at home to Rottenrow 1s – Conor Oliver scoring a consolation for the M3s.  The M4s, M5s, L5s and L6s drew blanks in their games to ultimately lose out to their respective opponents.  The M4s went 7-0 down to Hillhead 4s, whilst the M5s went one worse losing 8-0 to Hillhead 6s.  The L5s and L6s, despite hardworking displays, lost 1-0 to Garnock 1s and 4-0 to Dumfries 2s respectively.

Well done to all who turned out for their teams this weekend.  Don’t worry about the losses, keep your head up, keep attending training and you will see your team’s results improve!