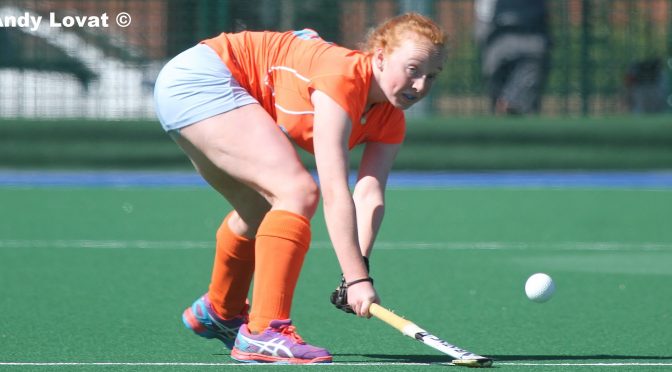 Clydesdale Western 1st XI recorded their second win of the league season after putting five second half goals past Grange EL at Titwood.

After a goalless first half, ‘Dale Western hit with devastating effect, as youngster Zara Mason scored two goals.  Anna Logan, Emma McGregor and Naomi Harkness were the other goalscorers as the home side sailed to a comprehensive victory.

The L1s have now picked up seven points from a possible nine after three games.

In a contest that was not short of intensity and hard work, both teams went in goalless at half time despite having chances to open the scoring.  It was the away side who struck in a matter of second half seconds when a Grange forward squeezed a shot past Clydesdale debutant goalkeeper Sean Mahoney.  From then on, it was Grange who stepped up their efforts with some fast flowing attacking play but ultimately could not find a second goal.

Clydesdale held strong with a number of crucial interceptions, tackles and blocks and were rewarded for their defensive effort when David Clark and Struan Walker combined to create ‘Dale’s equaliser – the latter finding space on his reverse side to send an unerring shot into the bottom corner.

A frantic finish to the game ensued, but no team could find an eventual winner.  Both sides are still unbeaten in the league season after two games – Clydesdale have drawn both of their opening games.

In the rest of Saturday’s games, the M2s fell to a 4-0 defeat to Grange 3s in the day’s first passback at Titwood.  Falling a goal behind at half time, proceedings failed to improve for the home side, as their Edinburgh opponents capitalised to score another three and take all three points.  The M3s suffered a similar fate, but went down to Hillhead 3s 2-1 at Old Anniesland – Ali Bleach scoring the away side’s only goal from a penalty corner.  The M4s picked up their first win of the season away to Irvine thanks to captain Russell Bradley scoring the game’s only goal.  In the ladies results, Helen McNaught and Gill Green both scored hattricks as the L3s ran out 6-0 winners at home to Edinburgh University 3s.  The L5s were sadly knocked out of the Women’s West District Cup after losing to a strong Ardrossan side 5-0 at Hutchesons’ Grammar School.

Plenty of games on tomorrow, so please do your best to get to ‘Dale and cheer on our guys and girls!