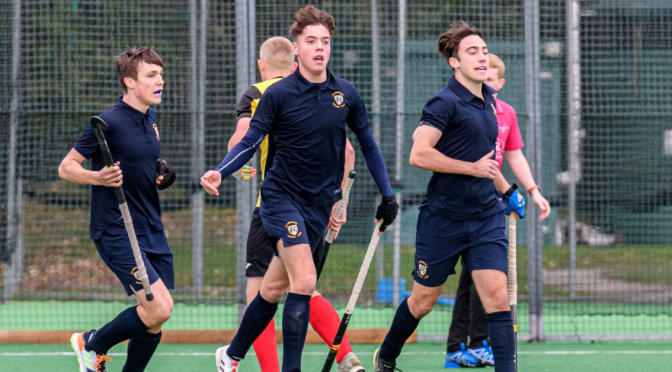 A stunning first ever hat-trick for Ali Douglas was the catalyst to a thumping Clydesdale 1s win over Hillhead 1s at Titwood on Saturday – but an anxious wait remains on other results to determine whether the Titwood side have done enough to secure a top six spot in the Men’s Premiership at the split period.

Two quick fire goals by Douglas in the first half was quickly halved by a Hillhead goal. But midway through the second half, David Nairn sealed the win before Douglas notched up his hat-trick finishing off a sublime team move. Skipper Andrew Allan and Ben Cosgrove also got in on the act to give Ciaran Crawford’s side a 6-1 win that – for now – takes Clydesdale into sixth place of the Men’s Premiership, whilst ending a run of four games without a win.

Uddingston 1s 8-1 loss to league leaders Western Wildcats 1s on Saturday saw them displaced from the top six and now means the South Lanarkshire side must win by seven goals at home to Watsonians 1s next weekend from their game in hand. Inverleith 1s also remain in the top six mix, but require an even larger scoreline against Grove Menzieshill 1s. A winning margin of fourteen goals will see the Edinburgh side leap into the top six slots.

Selection wise for the Hillhead contest, Crawford was already up against it with a few absentees, especially in the form of attacking players such as Patrick Lonergan and Euan Lindsay. But anyone watching would not have known given the quick start made by the Titwood boys when Douglas finished from close range in the game’s opening exchanges. The U21 Scotland international then doubled his and his side’s tally with a fine reverse stick shot past the Hillhead goalkeeper. The Jordanhill side responded quickly, however, from a penalty corner.

The game from then on was on a knife edge. For all of their excellent attacking build up, Clydesdale were unable to restore their two goal lead whilst Hillhead threatened on occasions, most notably in the form of penalty corners. Thankfully, it was to no avail, and a proverbial sigh of relief was let out by the home support when Nairn composed himself to round the opposition’s ‘keeper before tapping in for 3-1 midway through the third quarter. Douglas then completed his hat-trick following superb hockey that started with Allan’s pass out of defence to Jack McKenzie. McKenzie instinctively dummied the pass for Douglas on the left baseline and the latter exchanged passes with Ben Wilson before flicking high into the net. Allan with a drag flick penalty corner and Cosgrove with a reverse stick shot from the top of the circle added the gloss to a fantastic win for the M1s.

Clydesdale Western 1s remain top of the Women’s Premiership at the break period of the outdoor season following wins in a double header weekend at Titwood against Hillhead 1s and Dundee Wanderers 1s.

A 4-0 win against Hillhead on Saturday and a 13-1 thrashing of Dundee Wanderers on Sunday means Derek Forsyth’s side have won all of their eleven league games so far to sit three points ahead of nearest opponents Watsonians 1s in the league table.

Forsyth’s selection was unchanged for both games from the side that beat Erskine Stewart’s Melville 1s on Thursday night. The deadlock in Saturday’s contest against Hillhead was broken in the opening quarter through Emma McGregor’s front stick strike from the top of the circle. The home side doubled their lead in the second quarter when a save from McGregor’s initial shot was rebounded into the goal by Holly Steiger. After half time, Jenny Eadie made it three before Holly Steiger teed up Fiona Semple in the fourth quarter to give the L1s a comfortable four goal win.

Sunday’s 13-1 result was the third time in total this season – from their last four games no less – that ‘Dale Western have racked up goals in double figures. Heather Lang got the scoring underway, deflecting in a Millie Steiger pass. Eadie then made it two after picking up loose possesion and reversing in emphatically. Lang reversed a pass in for Emma Murray to make it 3-0. In the second quarter, a ‘slip left’ penalty corner saw Anna Hoolaghan set up Semple for a deflection, Millie Steiger’s one-two with McGregor was finished off at the near post by the former to make it five before Lang’s square pass for Annabel Ballantyne put the home side six goals up by half time.

A change of ends, but no let up from the L1s. A superb team move got the outcome it deserved when Eadie, Millie Steiger, Semple and Paz Medina San Martin all combined for Holly Steiger to get in on the scoring. Eadie scored two penalty corners either side of an accredited goal to Murray following an inadvertent deflection. More goals followed when San Martin tucked in a rebound and McGregor tapped in a Lang pass – giving the latter a goal and three assists on the day. The only blot on the copy book for Clydesdale Western was conceding from a sweetly struck Wanderers penalty corner to end a sensational run of eight straight clean sheets in the league. But the Titwood girls had the final scoring say when Bronwyn Shields set up Semple to add one more on the dozen already registered.

From the remaining ten Clydesdale & Clydesdale Western teams in action, the L2s were the only team to record a win whilst four other fixtures finished level.

The L2s got their challenge in the Women’s Championship back on track as a goal each from Rhona McGregor, Rosie Tudor and Emma Webster gave Donald Amour’s side a 3-1 win at home to Glasgow University 2s. No such luck for the L3s in the same division, who – despite a goal from Claire MacDonald – went down 2-1 to Hillhead 2s at Upper Windyedge.

In Men’s West District Division Two, the M4s came back late from a 2-0 deficit to draw 2-2 away to Hillhead 4s. Niklas Lange and Russell Bradley scoring a goal each to rescue a point for the M4s. The M5s and M5s Development played out a 1-1 draw at Hutchesons’ Grammar School (HGS) in Men’s West District Division Three. Representing the M5s, Lachie Stout scored his first ever goal for the club, but youngster Hamish Cornell also got a goal for the M5s Development to give both sides a share of the spoils.

The M2s in the Men’s Regional Division were involved in a fantastic game, but came out the wrong side of a 3-1 scoreline at home to Western Wildcats 2s at Titwood. Adam Docherty tapped in from close range minutes into the second half. But a ten minute yellow card for the home side and the subsequent award of a penalty flick for the away side changed the direction of the game as Wildcats scored two goals by the end of quarter three before adding another in the fourth. The L4s suffered a last minute 1-0 defeat away to Loch Lomond 1s in Women’s West District Division One. And in Women’s West District Division Three, a young L6s side – highlighted by debuts for Lena McBride and Ailish Dunlop – were unfortunately beaten 8-0 to Troon 2s at HGS.