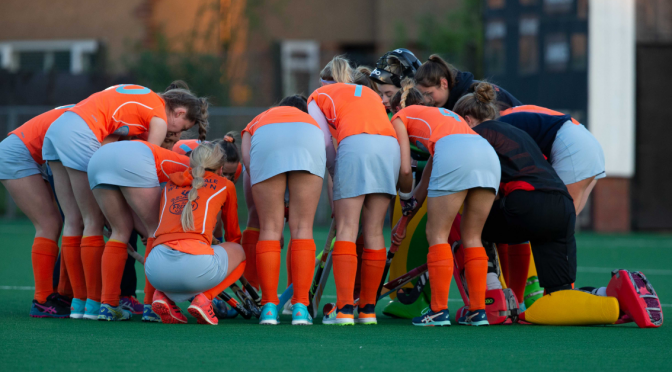 Clydesdale Western 1s Women’s Premiership title challenge was ended for another season after losing to incoming champions Watsonians 1s at a well-attended Titwood on Thursday evening.

The L1s got off to a less than ideal start when they conceded in the opening minutes. Despite a performance full of endeavor, the home side were unable to break their Edinburgh counterparts resistance before losing another two goals in the final quarter. The 3-0 result confirmed Watsonians place as Women’s Premiership champions whilst Clydesdale Western now switch their attention to retaining a European hockey qualification spot at the expense of Edinburgh University 1s, to whom they play on Tuesday evening at Titwood. Whilst the loss will be of disappointment, Head Coach Derek Forsyth can hopefully look back in pride given the effort his squad put in on Thursday evening’s match up with their Myreside opponents.

For the first time in the league this season, Forsyth named more than 16 players in his matchday squad following the inclusion of goalkeeper Iona Colquhoun. Youngster Anna Winter was also rewarded with a league debut selection following impressive training performances in recent weeks.

Both sides had large followings support down the supporters fence, and the game itself was greeted with an early goal. Unfortunately for ‘Dale Western, it was the away side who took the lead when Cara McAllister’s save was followed in by a Watsonians forward. Once the home side got to grips with the game, consistent pressure was built, particularly through Karin Belch who was proving to be the L1s prominent attacking threat. But frustratingly, Forsyth’s team were unable to create any clear cut openings and were also kept true with the threat of a Watsons’ counter attack on a few occasions.

After the break, the contest was much the same. But when the Titwood girls created clear openings, they were unable to beat the opposition’s goalkeeper from two quick fire chances from youngster Emma Murray and then seconds later from Heather O’Brien. And Clydesdale Western were to rue those misses as in the final quarter, a Watsonians forward nipped ahead of McAllister to tap in from close range before another forward reversed in from an acute angle to seal the league crown for the Edinburgh side.

Neil Morton Lloyd deflected in during a dominant first half display before Adam Docherty knocked in Jack Nairn’s cross shot for 2-0. Graham Dunlop added goals either side of a Watsonians 2s consolation to seal all three points for Stuart Banford’s side.

Earlier in the day at Titwood, the M5s Development won 4-0 against Dumfries 2s. Iain Flynn got the first two goals before David Mitchell marked his debut with a goal. Jack Wallace completed the scoring in the Men’s West District Division Three contest. The 4-0 win for the M5s Development was a recovery from the previous day’s 3-0 loss against Western Wildcats 4s.

Sticking with Saturday, the L4s completed their season in Women’s West District Division One with a 4-2 loss away to Dumfries 1s. Ann Menzies scored both goals in the first half for the visitors. Meanwhile, the L2s had a difficult afternoon in the A Division of the Women’s Championship, losing 6-0 to champions Edinburgh University 2s at Peffermill.

Clydesdale Western 1s host Edinburgh University Women’s 1s on Tuesday evening at Titwood in the Women’s Premiership knowing a win for either side will seal qualification for European hockey next season.

Following the disappointment of missing out on the league championship, the L1s switch their attention to sealing second place in order to qualify for competitive European hockey for next season. Uni’s 2-2 draw to champions Watsonians 1s on Sunday sees the student side hold a one point going into their final game of the season. Three points for either team would confirm second place, whilst a point shared would mean Clydesdale Western would need to win their final game of the league season away to GHK 1s on Saturday.

Head Coach Derek Forsyth has no notable injuries in his squad after Thursday’s 3-0 defeat to Watsonians. And it will remain to be seen whether two goalkeepers will be selected to increase squad selection from a maximum of 16 to 18. Rosie Tudor was absent last Thursday too, so may be in contention for a return. Anna Winter made her league debut for the 1st team, coming on for the final few minutes against Watsons and will also hope to be involved.

Clydesdale 1s visit Peffermill to face Edinburgh University Men’s 1s on Wednesday night in their bid to finish fourth in the Men’s Premiership this season.

A point for Ciaran Crawford’s side will all but seal a fourth place finish as it would take the M1s three points clear of this Saturday’s opponents Watsonians 1s with a far superior goal difference advantage in their favour.

Wednesday night’s game will be the Titwood boys first game in nearly three weeks, but thankfully for Crawford, there are no notable absentees going into their game against the student side.