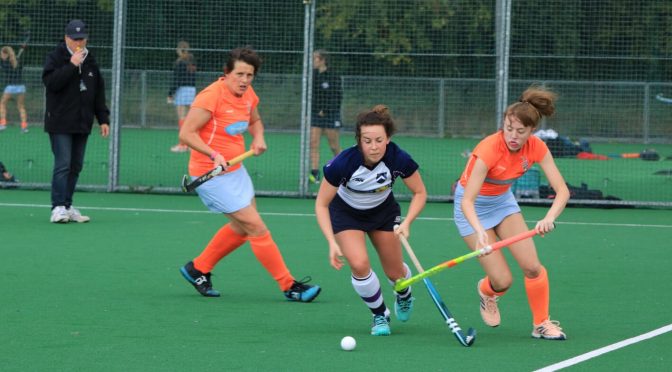 A goal each from Shona McConnell and Cath Stirling gave Clydesdale Western 4s a win in their first game of the Women’s West District Division One campaign at home to Glasgow Accies 1s.

McConnell and Stirling gave the L4s a 2-0 lead at half time, before Accies pulled a goal back towards the end of the second half.  Despite this goal, the home side saw out the victory in their opening game of the season.

It was the away side who started the brighter, with chances coming from penalty corners although L4s goalkeeper Laura Fyfe was up to the task of saving anything on target.  The L4s eventually settled, with Emma Murray, Catherine Clark, Zoe Monaghan and Ann Menzies becoming a larger influence on the game.  McConnell would start the scoring from open play, before Stirling deflected a Lorna Blair penalty corner high into the net.

The second half was a better start from the L4s, who were close to building on their two-goal lead via Stirling, Iona Denholm and Claire McKaig.  Equally, there were excellent defensive efforts from ‘Dale Western 4s midway through the second period from Kirstin McArthur, Patricia Lonergan and Aisha Rasul.  However, the home side’s defence were eventually breached when Accies 1s scored from open play with less than ten minutes remaining.  Piling on the pressure, Accies 1s did their utmost to force an equaliser, but a solid defensive shape through hardwork saw Clydesdale Western 4s over the line.

Clydesdale Men’s 3s lost their second game in a row in Men’s West District Division One, going down 3-1 away to Uddingston 3s – despite an M3s debut goal from Rory Harris.

The latest result for the M3s follows last weekend’s defeat to Western Wildcats 3s, meaning Craig Bradley’s side will have a wait to collect their first points of the season.

It was a disappointing start for the M3s, who conceded a sloppy deflected goal from an Uddingston 3s penalty corner.  But an excellent press saw the away side pick possession from an Uddy defensive hit out. Harris intercepting the ball before slotting a tidy finish low into the right corner.  But the home side retained their lead before half time to lead 2-1 at the break.

Uddingston then doubled their lead into the second half, deflecting in another penalty corner.  Clydesdale 3s did their best to step up to force a goal back and had a few chances, most notably from Mitchell Pritchard who put in another decent performance for the M3s.  Harris, again, had another set of chances, but was unable to take them despite, similarly to Pritchard, having a decent game on debut.  The home side saw out the game to seal three points, and at times could have walked away with a bigger scoreline had it not been for some crucial saves from M3s ‘keeper Dougie Mann.

Clydesdale Men’s 4s had a simply forgettable day after suffering a very heavy defeat to a strong Kelburne 4s side at Linwood.

Despite a goal from Logan Forsyth and Andrew Cox, the M4s struggled to contain a Kelburne 4s side featuring ex-Scotland international Chris Nelson.  Not helping matters further saw the M4s without the services of Martin Slater who was taken off following a serious looking head injury very early on.

In total, the Paisley side managed to score thirteen goals, despite an excellent finish from Forsyth, who smashed it forehand into the bottom left corner.  Forsyth was on hand for goal two, winning a penalty flick, which was expertly converted by another youngster in Andrew Cox.

The 13-2 defeat means the M4s, like the M3s, lost their second league game in a row in Men’s West District Division Two.