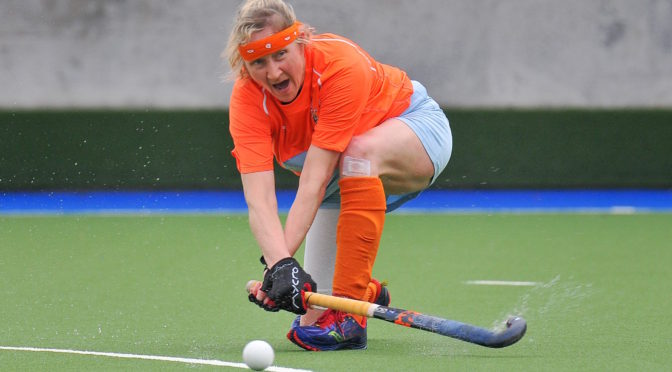 The L4s, despite taking the lead through a Wendy Justice penalty flick, found themselves 3-2 down at the break. However, three goals in the opening twelve minutes of the second half swayed the competition back in their favour.

Another goal for ‘Dale Western 4s and two from Watsonians 3s ended the scoring at 6-4 – and thus seal the L4s place in the Final of Women’s District Plate. Alongside Justice in the scoresheet was Cath Stirling, who scored four, whilst Karen Longmuir chipped in with a goal herself.

The L4s will play the Women’s Scottish District Plate Final on Sunday (5th May) against Glasgow Accies from 10.00am at Glasgow Green.

Clydesdale Western 2s lost in their bid to the be the winners of the Women’s Scottish Plate – despite being the only non 1st XI side left in the tournament – after going down to Kelburne 1s at Glasgow Green in the Semi Final stage.

The first half saw plenty of possession for the L2s, but their Paisley opponents grew into the game which included plenty of counter attacking opportunities. One of which was capitalised on after a shot from a forward found the goal via a deflection from defender Nicky Wilson.

In the second period, Kelburne doubled their lead early after another forward escaped the attentions of the last defender to lift over the onrushing Cara McAllister. The L2s tried in vain to force a goal back but chances for Helen Walker, Gill Green, Rhona McGregor and Ali Cox all failed to find the net. Kelburne eventually saw out the tie to book their place in next week’s Plate Final.

Clydesdale Men’s 3s hopes of reaching a knockout Final for the first time since 2015 were convincingly ended by a strong Western Wildcats 3s performance at Glasgow Green in the Men’s Scottish Reserve Plate Semi Final.

The M3s last attempts to play in a knockout Final was over four years ago, which saw them beaten 2-0 by Grange 3s. And their opponents in the Reserve Plate Semi Final, Wildcats 3s, put in an even more clinical display to run out 5-0 winners in the early morning passback and reach the competition’s Final.