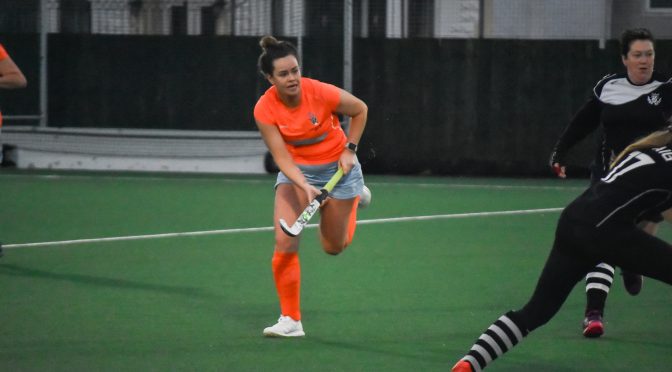 Clydesdale Western 4s booked their passage into the next round of the Women’s West District Cup after victory against Glasgow University 4s at Titwood on Monday night.

Two goals from Iona Denholm and one goal each from Karen Longmuir and Sheena McKelvie was enough to give the L4s a 4-1 win over Glasgow Uni 4s.  The result along with their current league form means Marg Taylor’s side are still unbeaten in all West district competitions.

On a night that exceeded all fears of pitch freezing, the L4s started the game well and opened the scoring early on following a well taken shot from Longmuir. The home side began to have a better share of the possession and took advantage of this by doubling their lead – McKelvie’s straight strike went low and hard into the bottom left corner.

The student side, to their credit, continued to test ‘Dale Western 4s, particularly on the counter attacker which brought some key saves from Laura Fyfe. The second period was when Denholm got both of her goals, with her first being slotted into the right corner from a penalty corner routine. Uni 4s responded to give them a small glimmer of hope, scoring from open play. But Denholm settled any nerves for her team after reacting quickest to a rebound from a save by the away side’s goalkeeper, which sealed Clydesdale Western 4s win.

Clydesdale Western 5s hopes of glory in the Women’s West District Plate were ended at the First Round after a Tuesday night defeat to Kelburne 3s at Titwood.

Despite some excellent sessions of play, it was the goalscoring instinct that was inevitably lacking for the L5s, who admittedly were missing key players. Kelburne 3s opened the scoring just before half time. The Paisley side stepped up in the second half to score two penalty corners and a fourth goal from open play.

An open play goal from Helen Hood was no more than a consolation as ‘Dale Western 5s – which included a number from the L6s putting in a great shift – bowed out of the WD Plate.

The M3s, M4s, M5s, L4s and the L6s all had their respective West District league matches fall victim to the freezing temperatures that left pitches at Titwood, Garscube, Linwood and Eastwood High all unplayable.

The fixtures involving these teams will be rescheduled at a later date in the season.