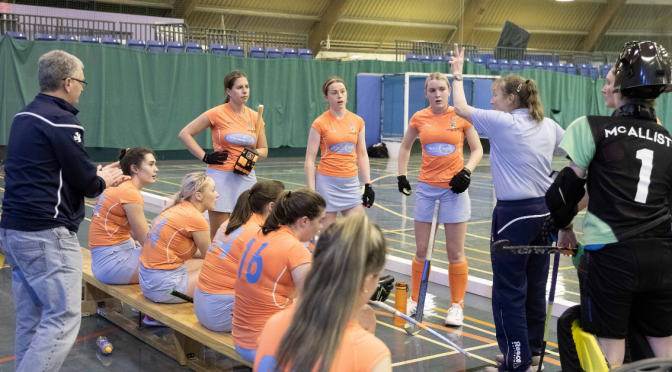 The L1s lost 4-2 to Turkish side Gaziantep Polisgücü SK in their opening game before succumbing to a 9-5 defeat to a clinical SK Slavia Prague side from the Czech Republic. The two losses sadly ends ‘Dale Western’s hopes of finishing top of the single group, with the highest place on offer available being second.

In the first of two games, Clydesdale Western took on a physical and skilful team in Gaziantep Polisgücü SK. After a goalless first quarter, Gaziantep scored three goals in the lead up to half time before adding a fourth in the third quarter. The Titwood girls rallied to try and pull off their third straight comeback of the tournament when Millie Steiger converted two short corners in the final quarter. But sadly, with time against the L1s, Gaziantep held on to keep up their own 100% record in Club Trophy whilst ending Clydesdale Western’s perfect start.

Game two started in frantic fashion against SK Slavia Prague. Slavia took an early lead in the opening minute, but Kayleigh Justice scored to restore a level score line straight after. The game remained an open contest after those opening exchanges, but it was the Czech side who stole a march on the score with two more goals to their name. The second quarter then rained goals. Slavia scored three whilst ‘Dale Western got two, one from Holly Steiger who deflected in a penalty corner and a penalty flick from Fiona Semple after Holly Steiger had been fouled inside the penalty circle. After half time, the L1s conceded another goal leaving the score at 7-3 with a quarter to play. Slavia made it 8-3 before Millie Steiger reduced the deficit with a rebounded finish. The Czech side then scored a ninth, but the L1s scored the final goal of the game – albeit in the form of a consolation – through Millie Steiger once more.

Following the two losses, Clydesdale Western sit fourth in the sole group of EuroHockey Indoor Club Trophy. Gaziantep also won their second game of the day and cannot be caught at the top, confirming them as winners of the tournament. The highest that Wendy Justice’s side can finish is second but would need a win against Irish side Railway Union coupled with a draw between SV Arminen and SK Slavia Prague. ‘Dale Western’s contest with Railway Union takes place on Sunday from 7.00am (GMT).

Clydesdale 1s restarted their Men’s Premiership season with an incredible 5-5 draw away to Dunfermline Carnegie 1s at Woodmill High School on Saturday.

In a topsy-turvy game that featured goals, cards and a major talking point at the end, skipper Andrew Allan got on the scoresheet twice and there was a goal each from Ali Douglas, David Clark and David Nairn. But it was the aforementioned major talking point of a penalty corner goal for the visitors in overtime that was disallowed due to what was believed to be an encroachment into the circle by an attacking player, sadly meaning Clydesdale had to settle for a point. The result means the M1s stay 6th in the top half split of the Men’s Premiership.

Going into the game, Head Coach Ciaran Crawford was without a number of personnel including goalkeeper Sean Mahoney, Jack McKenzie, Patrick Lonergan and Euan Anderson. Sandy Craig was the most notable call up to Crawford’s side heading into the game at Woodmill High.

In the first period, the M1s got off to a flyer when Douglas reversed in a venomous shot to open the scoring. One became two shortly after when Clark was on hand to convert a rebound via a save from Carnegie’s goalkeeper. By the start of the second quarter, the home side found a route back into the game finishing off a swift counter attack. But ‘Dale restored their two-goal advantage when Allan converted a penalty corner. Despite Carnegie being handed temporary suspensions to a couple of their players, the Fife side scored three unanswered goals to lead 4-3 at half time.

The second half was when Clydesdale levelled through Nairn’s instinctive deflection. But Dunfermline Carnegie scored again to go back in front once more before the end of the third quarter. In the final quarter, the Titwood boys were looking to get the ball into the Carnegie circle more frequently in a bid to fashion a fifth goal. And to Crawford’s relief, it paid off as Allan added a second, again through a penalty corner. The game was on a knife edge, but neither side were able to find an opening. That was until the M1s won a corner, which led into ‘overtime’. From the set piece, a goal was scored, but following consultations between both umpires, a Clydesdale player was adjudged to have encroached entering the penalty circle too early. It meant a retake was awarded, but this time the Titwood side drew a blank, leaving with a share of the points in a truly incredible spectacle of hockey.

There were two wins in the rest of the outdoor action for Clydesdale & Clydesdale Western teams on Saturday.

In the day’s earliest passback, the M3s secured a late win in Men’s West District Division One away to Helensburgh 1s. First half goals from Mitchell Pritchard and Colin Moulson gave Craig Bradley’s side a 2-0 lead by half time. Helensburgh scored two in the second half to level the score to 2-2 but Jeetinder Berman deflected in six minutes from time to give the M3s all three points.

The L2s and L3s, in opposite splits of the Women’s Championship, both failed to win their respective games. Rosie Tudor was on the scoresheet as the L2s drew 1-1 at home to Erskine Stewart’s Melville 2s. The L3s, meanwhile, lost 3-2 away to Waverley Inveresk Trinity 1s – Rachel Brown and Vanessa Sabala scoring in vain for the visitors.

The M2s won 9-0 in the Men’s Regional Division away to Kelburne 2s. Owen Gould scored an impressive four goals, whilst there was a goal each Fraser Cowle, Oran Pathi, Graham Dunlop, Jamie Green and Neil Morton Lloyd.